Wholesome nutrition is the key to maintaining a healthy immune system and resistance to disease. Commercial foods given to animals may not be truly balanced in major nutrients, minerals and vitamins, and some have chemicals added to enhance their stability and shelf-life. The prevalence of adverse food reactions (AFR) in clinical veterinary medicine is increasing at an alarming rate in pet animals, seemingly in parallel with the vast array of available commercial foods and home-prepared diets. Thus, nutritional imbalances and the undeclared ingredients found in some commercial pet foods, when combined with environmental exposures to various chemicals, drugs and toxins, present a continual immunological and cellular inflammatory challenge. These challenges can suppress immune function and cause chronic diseases including obesity, bowel upsets (dysbiosis), infections, and even cancers. 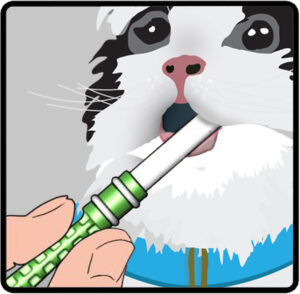 Fig. 1. Collecting Saliva from a Cat.

The published literature and clinical experience documents that cats, like dogs, can suffer from AFR, including chronic bowel disorders and a variety of other clinical signs. The difficulty, however, arises in attempting to accurately determine which food or foods are to blame. While AFR have classically been diagnosed by skin patch or prick testing, food elimination trials, and measurement of antibodies in serum, food elimination trials are fraught with discrepancies and failure of animal owners to comply, whereas skin patch or prick testing is unsightly. Further, serum antibody testing to identify AFR is poorly predictive of the exhibited clinical issues.

This prospective study assessed the efficacy of a novel saliva-based immunoassay of IgA- and IgM-antibodies in predicting food sensitivities and intolerances in cats. Clinical samples were obtained from 1000 cats proven or suspected to have food intolerances. Most were of domestic shorthair breed type, over 10 years of age, and weighed around 5 kilograms; they were equally distributed between spayed females and neutered males. Saliva was collected after at least an 8-hour fast with a dental cotton rope, placed in a double-sleeved saliva collection tube, and sent to the laboratory (Fig. 1). Salivary antibodies to 24 common foods were measured. Low reacting foods were lamb, cow milk, pork, turkey, wheat (lowest) and white-colored fish, whereas high reacting foods were millet, white potato, rice (highest) and salmon. Also, in contrast to dogs, the highest stated food reactions in cats were to beef, fish, and chicken, although the present study also found high results to rice (highest), millet (second highest), and white potatoes. Rice, shown to be unsuitable here for cats, is commonly recommended as a hypoallergenic food for pets with food sensitivities or inflammatory bowel disease. As millet is a food which affects thyroid function (goitrogenic), could older cats that eat millet be predisposed to an overactive thyroid gland, like they are from eating too much iodine?

Thus, manufacturers of commercial cat foods and treats, as well as those making homemade diets and treats for cats, should consider avoiding the more highly reactive foods as determined by the present study.