Aflatoxin B1: a foodborne contaminant which impairs sperm quality and fertilization competence

The gradual decline in fertility of human and farm animals over the past few decades coincides with intensive industrial and agricultural development. Multiple environmental factors affect sperm function and fertility, among them are aflatoxins, poisonous byproducts of the soilborne fungus Aspergillus, involved in the decomposition of plant materials. Aflatoxins can be found in various food products, such as maize, sorghum, millet, rice and wheat. Aflatoxins are of great concern to public health because they accumulate in the body and can be found in edible tissues, such as liver and muscles, as well as in animal food products such as milk and eggs. Moreover, aflatoxins have been found in human maternal breast milk and cord blood, and can apparently enter the developing fetus in humans and animals. Aflatoxins were found in semen samples collected from infertile men. The former was associated with abnormal sperm count and morphology, as well as reduced motility. Aflatoxin B1 (AFB1) is the most toxic aflatoxin, classified as a carcinogen and mutagen for both humans and animals. We examined the direct effects of AFB1 on sperm viability, acrosome reaction (AR), mitochondrial membrane potential (ΔΨm) and DNA integrity. In addition, we performed an in-vitro examination of the effect of AFB1 exposure on sperm fertilization capacity and early embryonic development (Fig. 1). 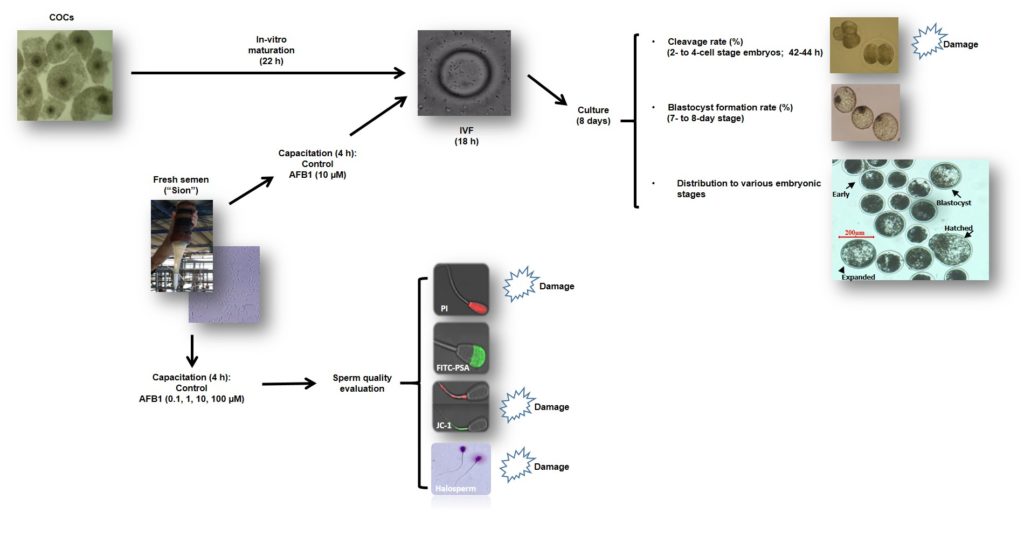 Fig. 1. Schematic illustration of the experimental design and the main results. Cumulus oocyte complexes (COCs) were retrieved from ovaries obtained from slaughterhouse and subjected to 22 h in-vitro maturation. Sperm retrieved from epididymis tail or from fresh ejaculates and was subjected to 4 h in-vitro capacitation in absence or presence of 0.1, 1, 10 or 100 µM AFB1. Sperm quality was evaluated by examination of sperm viability, acrosome integrity and mitochondrial membrane potential using PI, FITC-PSA and JC-1 fluorescent probes, respectively, and DNA integrity evaluation using Halosperm kit. Decreased sperm viability, hyperpolarization of the mitochondrial membrane and high proportion of DNA damage were observed. After detection of the most effective AFB1 concentration, IVF was performed using sperm capacitated for 4 h in presence of 10 µM AFB1. Zygotes were transferred to 8 days in-vitro culture after 18 h post fertilization. During the culture, cleavage and blastocyst formation rates were evaluated after 42-44 h and 7-8 days, respectively. Reduced cleavage rates were observed.

Spermatozoa were obtained from bull ejaculates and epididymis and capacitated in vitro for 4 h without or with 0.1, 1, 10 or 100 µM AFB1. Following capacitation, AR was induced by Ca2+ ionophore. The integrity and functionality of sperm membranes were examined simultaneously by fluorescent staining. A Halosperm DNA fragmentation kit was used to evaluate DNA integrity. An in-vitro culture system was used to evaluate fertilization competence and blastocyst formation rate, using bovine oocytes.

The findings of our study demonstrate direct effects of foodborne toxins on spermatozoa while exploring the potential hazards associated with AFB1 exposure. In particular, exposure of sperm to low concentrations of AFB1 for a few hours resulted in decreased sperm viability and hyperpolarization of the mitochondrial membrane, most markedly with ejaculated sperm, suggesting that not only the earlier stages of spermatogenesis are affected. Exposure of fresh semen to 10 µM AFB1 prefertilization resulted in sperm DNA damage and impaired fertilization competence, expressed by reduced proportion of oocytes that cleaved to 2- and 4-cell stage embryos, however, the proportion of embryos that developed to blastocysts, 7 days postfertilization was not affected. It is possible that the reduced cleavage rate reported here expresses a delay in embryonic development rather than fertilization failure. In support of this assumption, it has been recently reported that sperm with DNA damage can fertilize the oocyte. Moreover, soon after fertilization, a repair process starts in the oocyte, suggesting that the embryo can repair DNA damage of sperm origin. On the other hand, a high proportion of sperm with DNA damage is associated with altered metabolism in the developing blastocyst. These findings suggest that damaged DNA not only reduces sperm fertilization competence, but also negatively affects embryonic development. In the current study the proportion of blastocysts developed from AFB1-treated sperm (i.e., with damaged DNA) did not differ from that in the control group thus, genomic instability in these embryos cannot be excluded.

Although the mechanism underlying cellular damage caused by AFB1 has not been fully elucidated, the findings shed light on some potential alterations and hazard caused by AFB1 exposure. Given that sperm are sensitive to AFB1, semen of good-quality may be damaged by AFB1 through passage in female reproductive tract. Given the importance of sperm DNA integrity to the developing embryo, the quality of these embryos remains an open question. Further evaluation, at the RNA and protein levels, should be performed to evaluate a possible carryover effect to the blastocyst stage.