Mycotoxins are toxins produced by filamentous fungi in food, especially because of water stress in the field or inadequate humidity and temperature in storage. Mycotoxins produce a toxic effect on animals and humans, from acute effects to genotoxicity and cancer. The most prevalent mycotoxins are aflatoxins (B1, B2, G1, and G2), aflatoxin M1 (AFM1- a metabolite of AFB1), zearalenone (ZEN), ochratoxin A (OTA), patulin (PAT), fumonisins (B1, B2, and B3) and deoxynivalenol (DON). Of all mycotoxins, aflatoxins are the most toxic and carcinogenic, due to their extreme hepato-carcinogenicity. For this reason, different efforts have been put forward to reduce human exposure, particularly through food intake. Several countries not considered vulnerable groups, like children, in their regulatory limits, although they are about three times more susceptible than adults. In addition to measuring biomarkers in people, exposure to mycotoxins can be assessed indirectly based on data from contaminated foods and population food consumption. 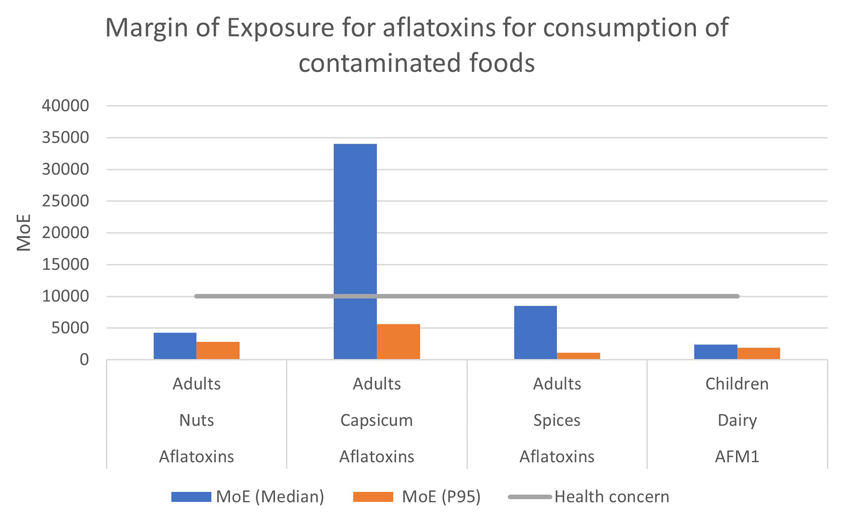 Fig. 1. The margin of exposure (MoE) for aflatoxins for the consumption of nuts and cereal in adults, and dairy in children and adults of Chile.

For this estimation, the degree of exposure is measured in terms of the probable daily intake (PDI) per unit of body weight, and it is generally expressed in ng/kg of body weight (bw) per day. For risk assessment, the PDI is compared with the tolerable daily intake. In the case of genotoxic carcinogens like aflatoxins, where any level can potentially cause an adverse effect, the Margin of Exposure (MoE) method is used. MoE is defined as a reference point on a laboratory animal dose-response curve, e.g. a benchmark dose lower confidence limit (BMDL), divided by the estimated human intake; a MoE below 10,000 may indicate a public health concern.

The aims of this study were to estimate mycotoxin occurrence and the contribution of main contaminated foodstuff in human exposure in Chile. Probabilistic estimation of the mycotoxin dietary intakes was made by the PDI using the following formula:

In nine years of surveillance (2008-2017), 2,020 food samples were analysed with an occurrence of 18.2% and with 2.7% of the samples being over the Chilean regulation. The occurrence of mycotoxins in food were 16% for aflatoxins, 6% for AFM1, 30% for OTA, 12% for DON, 7% for PAT, 21% for fumonisins and 2% for ZEN. From PDI estimation, only aflatoxins were considered a risk for public health, especially because of nuts, cereal, and dairy consumption (Fig. 1).

The current Chilean food safety regulation was based on international risk assessments. Although harmonized regulatory limits would be beneficial from a commercial point of view, this does not necessarily promote equal protection of human health in a homogeneous way around the world. The risks associated with mycotoxins depend on both the hazard and the exposure. The danger posed by mycotoxins to humans is probably similar worldwide, but not the exposure, because of differences in contamination levels and diet habits; therefore, reliable exposure assessments for mycotoxins in each region are necessary. Also, Chilean, and other countries’ regulations, do not consider specific vulnerabilities for certain toxins. To lower children’s exposure, because of their lower weight and detoxification capacity, must be a priority.

In light of these results, it is urgent to develop regulatory guidelines based on national information, with a focus on sensitive groups.