Air pollution is one of the most harmful factors posing threat to human health, worldwide. Of particular concern in urban environments are particulate matter (PM), especially fine (PM2.5) and ultrafine (PM1) fractions, ground-level ozone (O3), and nitrogen dioxide (NO2). At present, over a third of European Union’s Air Quality Management Zones exceed the limit values for particulate matter (PM10) and a quarter for nitrogen dioxide (NO2). According to World Health Organization, outdoor air pollution was responsible for the deaths of around 3.7 million people under the age of 60 in 2012 (WHO 2014). 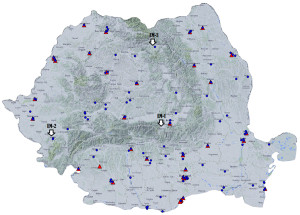 Data processing and forecasting techniques have an important role in providing the updated status of airborne pollutants’ load in a monitored area. The information that the end users receive must be accessible and easily interpretable, clearly understandable for all age groups, and able to assist the inner residents to choose a proper decision to diminish their exposure to air pollution.

Refined information regarding air quality in urban environments is very valuable especially for vulnerable population groups, such as elders, asthmatics, and children, who can avoid in proper time certain affected areas.

The interest in improving the forecasting performances of time series algorithms and models in air pollution studies has considerably grown. The applied methods are diversified from statistical methods, artificial intelligence (AI) techniques, and probabilistic approaches to hybrid algorithms and complex models.

Due to their flexibility and adaptability, AI techniques have become common tools in the field of air pollution. A well-known forecasting method is employing feedforward artificial neural networks using improved training algorithms with variable learning rates. The performances of the ANN in air pollution time series were studied for several types of training algorithms as well as for different neural network architectures (i.e., number of hidden layers and hidden nodes). 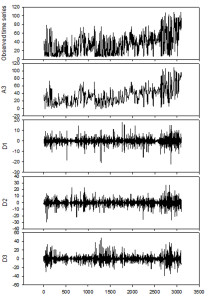 Wavelet neural networks (WNNs) have been an alternative to overcome these drawbacks related to time series predictions by integrating various wavelets (e.g., Mexican Hat, Gaussian wavelet, Morlet, Daubechies, etc.) in the hidden nodes of WNNs or as a pre-processing step.

The main aim of the study was to identify common hybrid configurations with optimal generalization performance that can mitigate local-scale variations of air pollutants’ concentrations for various sites in urban environments located in the south of Romania, European Union. Secondly, the model runs pointed out the pre-processing efficiencies of various wavelets for improving neural network utilization in air pollution forecasting.

Statistical and artificial intelligence techniques can provide reliable approximations to supplement the results from expensive analytic methods. Integration of a wavelet preprocessor into a hybrid neural network for air pollution forecasting should help the experts in subsequent assessments and should increase the role of the pollution control tools to understand how to reduce local or regional emissions towards safer levels for human health.

However, two major issues need to be addressed when using wavelet–artificial neural network approaches for successful development of air pollution prediction tools. Firstly, the specificity of pollutant species must be characterized according to pollutant’s type, emission sources, time series patterns and trends, and their influencing factors. Secondly, spatial variability of pollutant concentrations must be assessed based on the time series comparison of the same pollutant recorded in various locations to test model’s homogeneity and generalization level for the identified wavelet–neural network configuration. Forecasting accuracy depends also on the precision of measured data used as input in the hybrid models. Data incoherence, measurements error, overfitting, and time series discontinuity are factors that diminish the forecasting performance of the neural network. An important step for reliable air quality forecasting is the optimal selection of the learning algorithm, network topology, and generalization improvement.