Alkene synthesis – any way you want it

An alkene is a molecule containing two carbon atoms connected by a double bond, C=C (Fig. 1A). Alkenes are very common but their proper preparation requires careful attention to the placement of the four groups (Ri, i = 1 to 4) that surround the C=C unit. Rotation is not possible about the double bond and this means that in the case where all four Ri are different, six distinct arrangements of the groups are possible, each representing a unique form of the molecule (referred to as isomers). Two alkene isomers differing only in their connectivity pattern are said to be regioisomers, while a pair of isomers that share the same atomic connectivity but differ in the spatial arrangement of groups are said to be geometrical isomers (denoted by descriptors E and Z). In general, isomeric compounds exhibit quite different properties from one another and it is important to control which isomer is generated during the preparation of an alkene target. 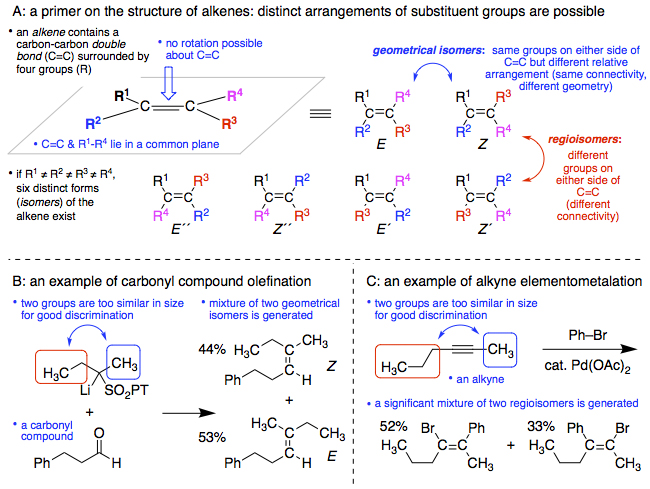 Fig. 1. An alkene is a molecule containing a carbon-carbon double bond (C=C). Six distinct alkene isomers are possible if all Ri about C=C bond are different (A). Carbonyl compound olefination (B) and alkyne elementometalation (C) fail to give acceptable levels of selectivity for one alkene isomer over another when groups Ri are similar in character to each other.

Olefination and alkyne elementometalation are two strategies commonly used to prepare alkenes but each method has major limitations. The first approach completely controls the type of regioisomer made but not which geometrical isomer is produced. By contrast, the second approach completely controls which geometrical isomer is generated but not which regioisomer. In cases where two or more groups Ri are very similar to one another it becomes difficult, or else impossible, to effectively make a single alkene isomer using these strategies (Fig. 1B & 1C).

A conceptually new method to make alkenes, eliminative cross-coupling, has been developed that overcomes earlier difficulties. The alkene is made from two building blocks called carbenoids that assemble in a precise and predictable fashion to give essentially a single product isomer regardless of the identity of the groups Ri. Exact details of the method are beyond the scope of this summary, but the essence of it is easy to convey at an heuristic level (Fig. 2A). Carbenoids are species containing tetracoordinate/tetrahedral carbon atoms each bonded to a metal atom (M), a halogen- or oxygen-like atom (X), and two groups (Ri) that are retained. Crucially, each carbenoid is used in only one of its two possible ‘handed’ forms (draw a parallel to any familiar object with handness, e.g., a shoe or a golf club), either ‘right’ or ‘left’ handed (denoted by descriptors R and S). The two carbenoids combine with one another by mutual annihilation of their respective M and X atoms, this generates the double bond and two stable metal salt by-products (MX´, M´X). Which two Ri groups appear within each carbenoid determines the targeted alkene regioisomer while our choice to combine either ‘left-with-left’ (a like combination) or ‘left-with-right’ (an unlike combination) handed pairs of carbenoids determines which geometrical isomer of the alkene is made.

Proof-of-principle for eliminative cross-coupling was established by combining carbenoids containing lithium and oxygen with carbenoids containing boron and oxygen (Fig. 2B). As anticipated, like and unlike combinations of the pairs of carbenoids led to different geometrical isomers of the desired alkenes and with selectivity typically surpassing 19:1. The scope of the process as demonstrated was limited to simple trisubstituted alkenes of the styrene class and it remains to extend it to a wider variety of alkene targets and to improve on the chemical yield. 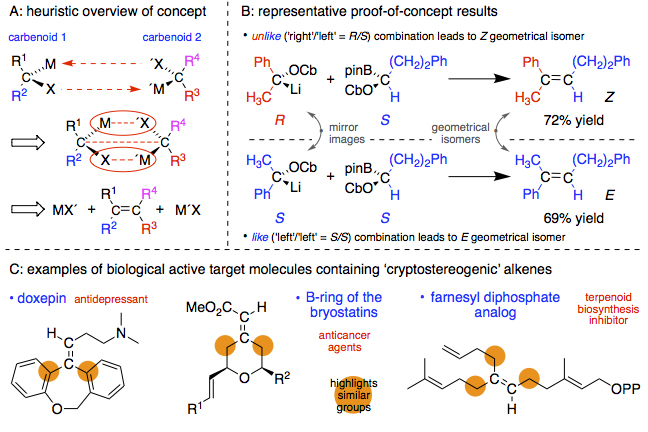 Fig. 2. Fully controlled preparation of alkene isomers by eliminative cross-coupling of carbenoids. Understanding the concept at a heuristic level (A), representative results (B), and some significant biologically active targets that could benefit from application of the method (C).

In sum, eliminative cross-coupling makes it possible to precisely target a desired alkene isomer regardless of the nature of the structural differences responsible for distinguishing isomers. As such, this method has potential for the direct synthesis of biologically active alkenes possessing isomers that are all but impossible to access selectively with traditional approaches (Fig. 2C).

One Response to Alkene synthesis – any way you want it