Biological control, using parasitoids in particular, has received increased attention because this control method is cost effective and offers a management strategy that safeguards human health and the environment. Insect parasitoids are, in many cases, a significant component of integrated pest management systems. They develop as parasites of other arthropods, mostly insects, causing their death or sterility.

Among parasitoids, Cotesia is one of the most diverse genera of Hymenoptera used in biological control. Among species of the flavipes complex, two species are widely recognized for their natural impact on Lepidoptera stemborers of various graminaceous crop plants and have successfully been introduced in biological control programs. Cotesia flavipes is released at large-scale in Brazil against sugarcane pyralid borers and acclimatized populations in Africa exert a satisfying control of a pyralid maize borer. Cotesia sesamiae exerts a natural limitation of major maize noctuid pests in sub-saharan Africa, with differences of host range between wasp populations. Besides these two relatively generalist species, Cotesia typhae is strictly specialized on the noctuid Sesamia nonagrioides which is a main pest in Mediterranean countries including France, and requires a biocontrol agent. Such host-range variation within the species complex is thus a nice system to investigate how host acceptance mechanisms explain adaptation to local host. 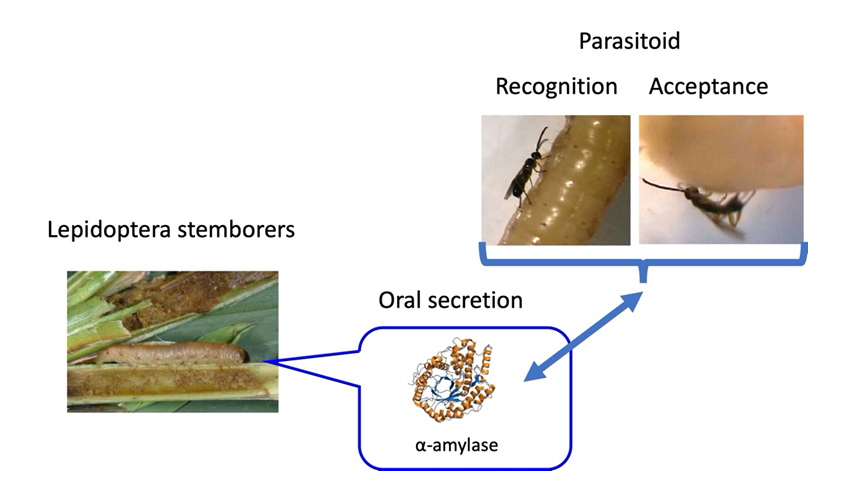 Fig. 1. The alpha-amylase from the oral secretion of Lepidoptera stemborer caterpillars are used by the Cotesia parasitoid females for host recognition and acceptance.

Foraging parasitoids use chemical signals in host recognition and selection processes. Thereby, chemicals from the herbivore hosts play a crucial role. When different herbivores are present in the same plant or field, the perception of specific volatiles and contact compounds emitted from the host itself enable the parasitoids both to differentiate between hosts and non-hosts and to estimate the health and suitability status of its host. During the host feeding process, contact between the parasitoid and its host is very crucial, and oral secretions from the host play a key role during the first contact for such evaluation by the parasitoid.

Using an integration of behavioral observations and biochemical approaches, we first showed that female parasitoids of Cotesia recognize their host and oviposit in reaction to an α-amylase, which is present in the oral secretions of their caterpillar host. Using synthetized α-amylases from Drosophila melanogaster (an insect model for which syntheses of active and inactive α-amylases are available), we observed that the conformation of the enzyme rather than its catalytic site as well as its substrate and its degradation product is responsible for host acceptance and oviposition mediation of parasitoid females.

In addition, we found that this enzyme had different electrophoretic profiles that exhibited species-specific migration patterns. The behaviour of different species and populations of Cotesia flavipes complex revealed that the molecular variations in this enzyme could explain and account for host-range differences between parasitoid species.

This discovery opens new avenue to investigate evolutionary processes at play in chemically-mediated host specialization in the species-rich Cotesia genus. This further explains how this enzyme allows Cotesia females to discriminate between host and non-host larvae. This provides important baseline information useful in improving pest control in Africa using biological control practices. In a near future the main relevance in agriculture is to deliver more efficient parasitoid’s strains against pest insects. The identification of α-amylase’s receptors involved in host acceptance mediation in the future will help in the targeting of the genes of these receptors with the aim of carrying out genetic improvements on the same.