The human genome is predicted to contain 22.000 coding genes, but more than 200.000 proteins are expressed in human cells. This discrepancy is explained at least in part by the presence of alternative splicing (AS), a key post-transcriptional mechanism that allows the genome to expand its coding capacity. Pre-mRNA splicing involves removal of introns (intragenic non-coding regions) and retention of exons (coding regions). This is not, however, a rigid process and 95% of human genes show variations generated by different usage of alternative exons (in average, human genes encode >5 splice variants). This combination of alternative sets of exons allow single genes to produce multiple protein variants that may exhibit different biological functions. AS varies in a tissue-specific manner and plays an important role in virtually all biological processes, including cell death and response to stimuli and disease. AS functions in regulatory networks, where functionally-related genes are simultaneously spliced leading to specific biological outcomes. 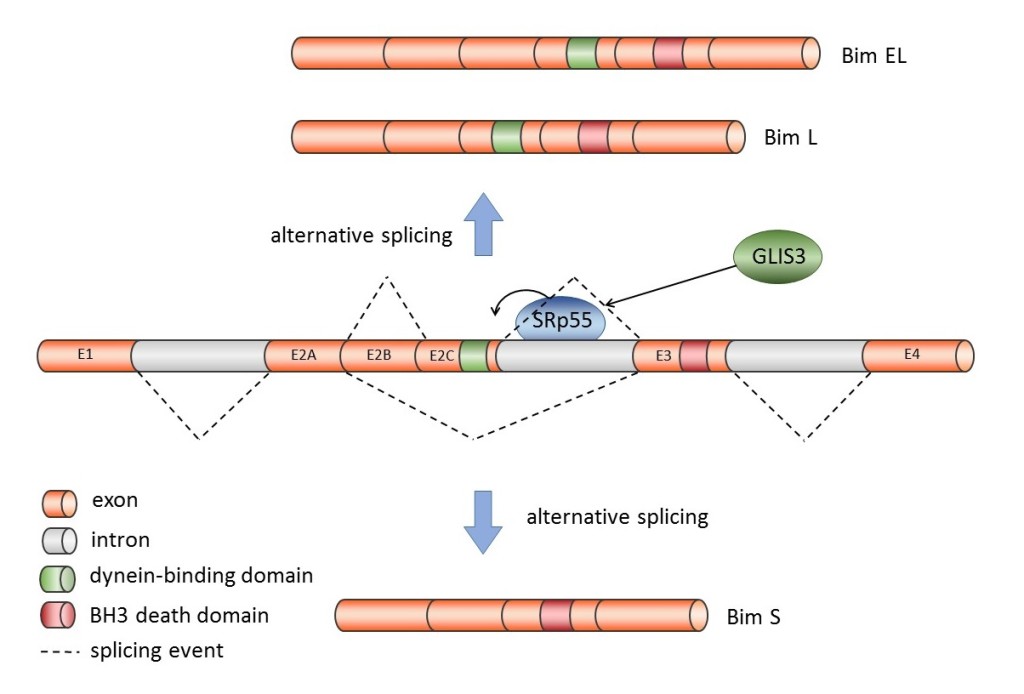 Type 1 diabetes (T1D) is a chronic autoimmune disease, where the immune system destroys most pancreatic beta cells leading to life-long dependency on insulin therapy. Beta cells are killed by infiltrating immune cells and by cytokines released by these cells that deliver signals that culminate in beta cell apoptosis, a form of “cellular suicide”. The intracellular signals that decide between beta cell survival or death remain to be clarified. AS defects have been found in several autoimmune diseases but little is known about their role in T1D and in the process of beta cell apoptosis.

T1D is determined by >50 candidate genes that regulate responses to environmental stimuli, such as virus infections, leading to autoimmunity. We found that one of these candidate genes, GLIS3, contributes to beta cell death by modulating the AS of Bim, a pro-apoptotic protein that plays a key role in cytokine-induced beta cell death (Fig. 1).

To study how inflammation affects beta cell AS at a global scale (i.e genomic scale) we performed RNA sequencing (RNA-seq) of human islets exposed to control conditions or to pro-inflammatory cytokines, mimicking the inflammation-generated signals that beta cells are exposed to during early T1D. RNA-seq is a high-throughput technology that allows the sequencing of the whole cell transcriptome and detection of both alterations in gene expression and alternative splicing. We observed that inflammation alters the expression of >30 splicing factors and modifies the splicing of >3000 genes. These genes are enriched in key functions for beta cells, including cell death, antigen presentation, mitochondria dysfunction, unfolded protein response and several immune cell-related pathways.

Taken together, these data suggest that inflammation, in cross-talk with susceptibility genes, leads to activation of specific splicing regulatory networks that modulate beta cell viability and susceptibility to immune-induced stress. Some networks may generate new autoantigens (self-molecules capable of inducing an immune response) leading to exacerbation of the autoimmune attack, while others may contribute to beta cell death by modifying death-related proteins and key pathways for beta cell function and survival. Unveiling the role of AS in beta cell dysfunction and death will shed light on the mechanisms underlying T1D pathogenesis and may open new strategies for disease prevention/treatment based on splicing modulation.