Alzheimer’s disease (AD) is one of the most common causes of senile dementia and it is estimated that by 2050, the number of cases will rise to 110 million. The vast majority of patients suffer from the late-onset and sporadic form of the disease (SAD), where we can’t find hereditary patterns among members of a family.  As a general explanation, AD progression is associated with the formation of senile β-amyloid (Aβ) plaques and accumulations of Tau proteins in the brain. The accumulations of both proteins force the neurons to die, mainly in the hippocampus and brain cortex, causing a progressively loss of learning and memory abilities. In the SAD, apart from the Aβ itself, we know that some other factors contribute to the pathology: oxidative stress, alterations in glucose metabolism, deregulation of Ca2+ signalling, deregulation of glial cell activity, alterations in nutritional behaviour, metabolic syndrome and obesity, hypertension and type 2 diabetes mellitus (T2DM). In our research we describe that, for many patients of SAD, the hormones insulin and leptin don’t function correctly. What does it mean? 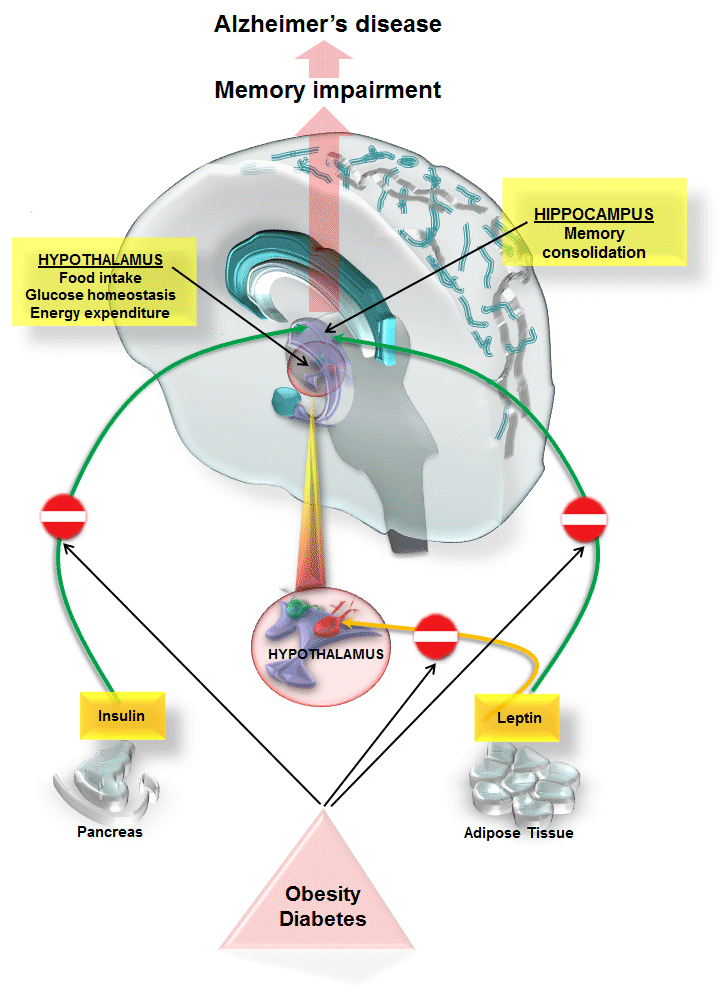 Fig. 1. In the hypothalamus, leptin regulates food intake, glucose homeostasis, and energy expenditure. Leptin and insulin decrease appetite by inhibiting neurons in the arcuate-nucleus region of the hypothalamus. The hippocampus integrates signals from leptin and insulin that promote neuronal survival and memory consolidation. The obese and T2DM status block these signals and contribute to increase risk of memory impairment and Alzheimer’s disease.

The human body is a complex machinery that needs to coordinate different organs and tissues. One main regulator of this machinery is a little gland, not bigger than a pea, called hypothalamus which is located in the middle of the brain. This gland is responsible for the production of many of the body’s essential hormones and controls its temperature, energy levels, sleep cycle, blood pressure, appetite, etc. The hypothalamus is the link between the endocrine and nervous systems, integrating signals from the nerves, the senses and the skin, blood pressure, the digestive system, etc. We can easily imagine the hypothalamus as the central computer of our car: controlling and giving information about levels of gasoline, oil, brakes, temperature, etc.

In the hypothalamus, specialized groups of neurons are sensitive to signals coming from organs related to food intake like the pancreas, stomach or the adipose tissue. Whereas the pancreas secretes insulin and glucagon, leptin is one of the hormones secreted by the adipose tissue, which instead of being a mere storage unit of fat, acts as endocrine tissue. Leptin is secreted when the adipose cells accumulate fat we absorb from the food in the gut. Leptin is released in the blood, where it is transported to the brain and gives the hypothalamus a message that sounds more or less like this “I’m fine, we can stop eating”. Then, leptin signalling allows us to control the quantity of food we eat.

Unfortunately, sometimes this fine machinery can be damaged by a variety of circumstances. For example, it has been observed that in many obese people leptin does not correctly inform the hypothalamus to stop eating. Furthermore, in many obese patients, insulin is not able to exert its functions allowing glucose to move from blood to cells. This problem is called T2DM. Furthermore, recent evidence from studies carried on T2DM patients, suggest that this condition can favour the appearance of severe diseases like cancer and neurodegenerative processes.

More recently, it has been observed that insulin and leptin send messages not only to the hypothalamus, but also to the hippocampus where memory is processed. Then, these hormones are also involved in memory consolidation favouring neuron survival. By contrast, the impairments in insulin and leptin signalling in the hippocampus of T2DM patients, can favour the loss of memory and the progression of dementia. Then, we can conclude that the sporadic form of the Alzheimer’s disease can be somehow considered as a brain manifestation of a systemic metabolic disease.