APOE ε4 is the most common genetic risk factor for development of Alzheimer’s disease. Having two copies of this gene (one from the mother and one from the father) increases a person’s relative risk to as much as 12 times the general population. In fact, 50-70% of people with Alzheimer’s disease have at least one copy of APOE ε4. Despite this association with Alzheimer risk, the precise mechanism for the effect of ApoE4, the protein product made from APOE ε4, to increase this risk was unknown. Alzheimer’s disease is characterized by the gradual build-up of sticky protein aggregates made up of amyloid beta, which form plaques outside of neurons, as well as hyperphosphorylated fragments of tau, a structural protein which stabilizes the microtubule “train tracks” that proteins travel along to reach their destination in the cells. Protein aggregates like these are generally broken down by a process called autophagy, which packages this cellular garbage into membrane-bound vesicles called autophagosomes, like garbage bags, which are then degraded by acid-containing vesicles called lysosomes. This process of degrading cellular debris is regulated at the mRNA level by a transcription factor called TFEB, which binds to DNA motifs called CLEAR sites to upregulate autophagy mRNAs, which are then used to make the proteins LAMP2, p62, and LC3. These three proteins make up important components of autophagosomes and lysosomes; that is, a cell’s garbage disposal system.

Fig. 1. A. Alzheimer patients with two copies of the APOE e3 gene (AD 3,3) increase autophagy mRNA in response to Alzheimer stress, while those with two copies of APOE e4 (AD 4,4) cannot. B. ApoE3 does not bind CLEAR DNA, while ApoE4 binds CLEAR DNA closely. C. ApoE3 separates from CLEAR over a 50 nanosecond simulation, while ApoE4 gets closer to CLEAR and stays close throughout the simulation.

In our study, we first found that patients with advanced Alzheimer’s disease, when separated into groups that either had two copies of the risky APOE ε4 gene (AD 4,4), or those that had two copies of the neutral APOE ε3 gene (AD 3,3), showed a difference in the amount of mRNA and protein for these important autophagy proteins, implying that those with two copies of APOE ε4 were unable to increase autophagy mRNA. Then, in cells designed to generate biologically relevant ApoE3 or ApoE4 particles, we found that cells producing ApoE4 had a similar pattern in autophagy mRNA production as did Alzheimer patients, and that the presence of ApoE4 led to a build-up of protein aggregates consistent with dysfunctional autophagy. Further, we found through computational modeling that ApoE4 protein binds directly to the CLEAR motif, competing with TFEB and thus interfering with its ability to upregulate autophagy mRNAs. This computational prediction was borne out, as we not only confirmed previous reports that ApoE can be found in the nucleus of cells, but also that CLEAR DNA preferentially bound ApoE4 compared to ApoE3, and that the presence of ApoE4, but not ApoE3, led to reduced TFEB binding to CLEAR DNA. 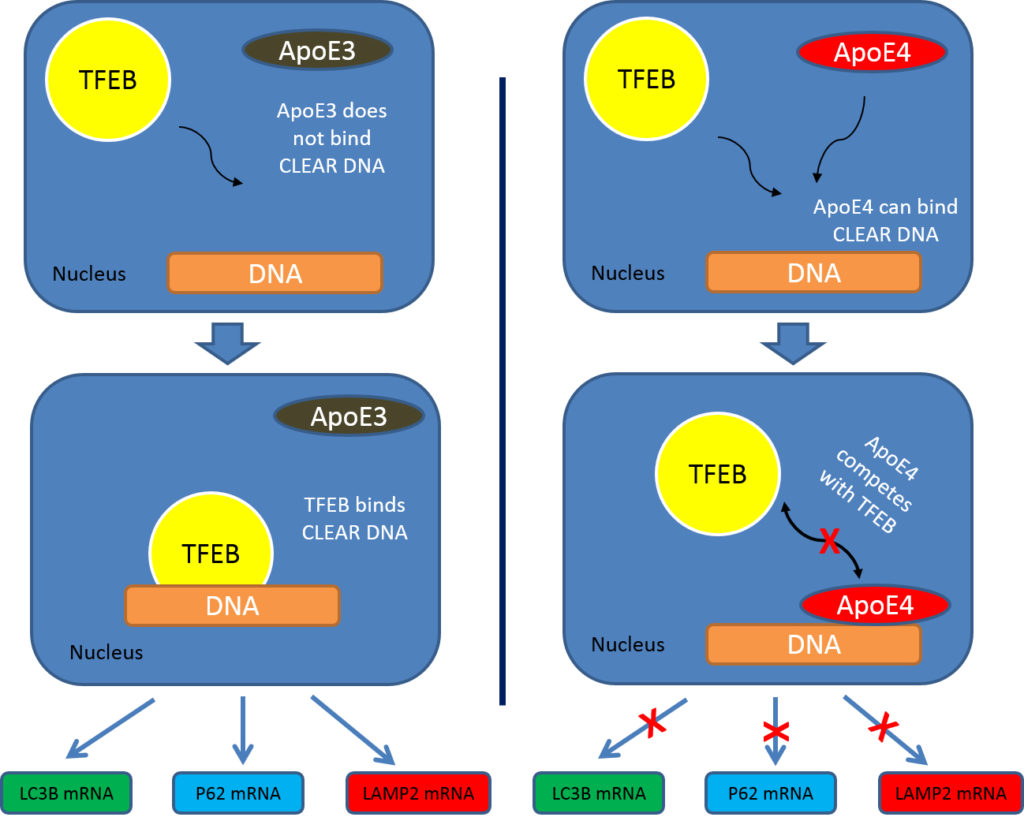 Fig. 2. The lack of ApoE3 binding to CLEAR DNA allows TFEB to bind to CLEAR, and in this way, increase autophagy mRNAs for clearance of cellular garbage. On the other hand, the ability of ApoE4 to bind CLEAR DNA results in competition with TFEB and less autophagy mRNAs. This leads to less clearance of cellular garbage, and therefore, greater risk for Alzheimer’s disease.

These experiments demonstrate that ApoE4 confers risk for Alzheimer’s disease at least in part due to the effect of blunting the autophagic response of cells in the presence of ApoE4 through the direct binding of ApoE4 to the CLEAR motif.  This competition between ApoE4 and TFEB leads to decreased autophagy mRNA synthesis and subsequently decreased autophagy-mediated clearance of spent or unwanted proteins. This means that inheriting the APOE ε4 risk genes weakens the brain’s ability to get rid of the spent or unwanted proteins which aggregate into the beta-amyloid plaques and neurofibrillary tangles that are the characteristic features of Alzheimer’s disease.