AMPK, an energy consumption supervisor, regulates hedgehog and may be a cancer therapeutic target

A cell can be thought of as a factory with many machines controlling different processes. Cell growth is the process by which a cell divides and multiplies. It is a highly energy-consuming process. Therefore, supervisors are needed to oversee the factory operations such that the cell does not overuse its energy. 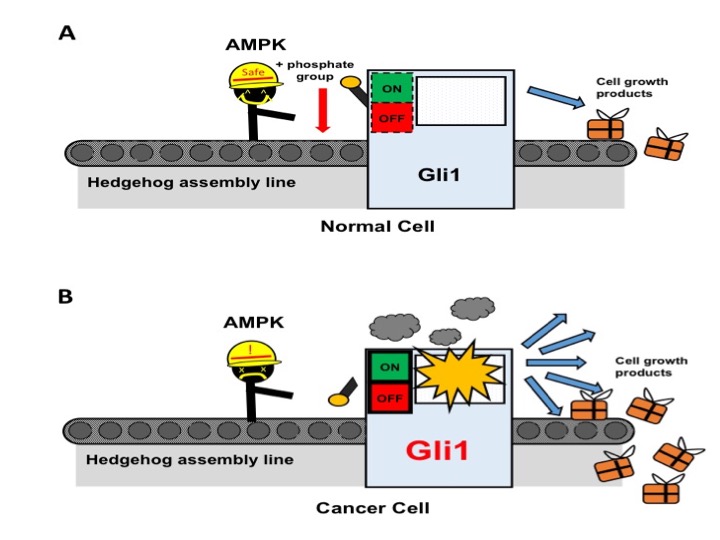 Fig. 1. A cartoon illustrates how AMPK regulates Hedgehog pathway. (A) A normal cell can be thought of as a factory with many machines controlling different processes. Cell growth is a process that is highly energy-consuming. AMP kinase (AMPK) is a supervisor of the energy expenses of a cell. In normal cellular operations, AMPK decreases the activity of a cell growth promoter called Gli1 when the cell is stressed or low in energy. It accomplishes this by adding a phosphate group to Gli1. (B) Cell growth is uncontrolled in diseases such as cancer. Uncontrolled cell growth can arise from scenarios such as uncontrolled Gli1 activity.

AMPK controls the hedgehog pathway by adding modifications to proteins in the pathway. These modifications can either switch on or off the activity of these proteins. For example, AMPK adds a phosphate group to Gli1. This modification of Gli1 protein slows down the transcriptional activity of Gli1 so the pathway does not produce as many necessary proteins for cell growth. This in turn decreases cell energy expenses. In this way, AMPK can control energy costs in response to the environmental cues in the cell.

Imagine if a machine malfunctions, it might produce too much of a product. Too much of the production of Gli1 in the hedgehog pathway promotes abnormal, uncontrolled cell growth, and indeed, this is what happens in diseases such as cancer. Since AMPK activity shuts off the cell growth-promoting function of Gli1, it makes sense that if we induce AMPK activity, we can downplay the action of Gli1. This makes AMPK a potential drug target in cancer therapy.