An algal infection (protothecosis) in a cat

This case report describes a cat with inflammation caused by an infection with a particular type of algae named Prototheca. The evoked clinical disease is called protothecosis. 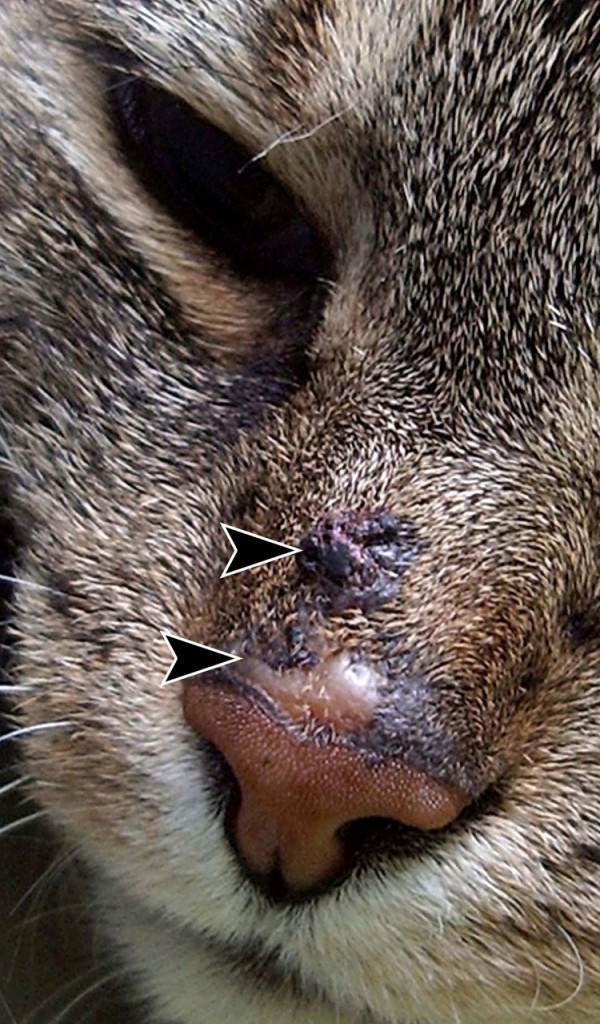 Fig. 1. Shown is the cat’s hairless crusted spot within the skin of the dorsal nasal area (arrowheads).

Prototheca species and their occurrence in the environment. Prototheca species belong to the green algae (Family Chlorellaceae, Genus Prototheca). In comparison to other green algae, these are neither green nor visible to the naked eye. This former is due to the loss of a particular cellular organelle (chloroblast). Prototheca is a tiny organism measuring 8-21 µm in diameter that consists of only one cell and replicates by irregular division (called endosporulation). Prototheca occurs worldwide in the terrestrial environment, e.g. plants, water and soil. It has also been isolated from the surface of the skin, the respiratory tract and the faeces of healthy men and domestic animals. Thus, an exposure to this organism can happen everywhere, for example at home in the garden, on a farm or at a recreational area.

Notably, protothecosis of domestic animals and men differ in regard to the most commonly affected organ(s), i.e. in cows it is the mammary gland and in cats and men the skin. In dogs, an initial infection of the bowl is often followed by a spread to other organs.

This case. A 14-year-old female domestic shorthair cat had a hairless crusted spot within the skin of the dorsal nasal area and a swelling within the nostril, both measured ca. 0.5 cm in diameter (Fig. 1). Due to the latter, the cat had mild breathing problems.

For a further diagnostic workup and to rule out cancer, biopsies of the altered tissue were taken and submitted for microscopic examination. This revealed marked inflammation and intralesional organisms resembling algae that even showed endosporulation (Fig. 2).

For the definitive diagnosis of an algal infection, however, it is necessary to specifically identify cellular structures that are unique to algae or even certain types of algae such as Prototheca. In the present case, this was done using the following diagnostic tests, i.e. immunohistochemistry and molecular methods (PCR and sequencing). These detected Prototheca specific proteins and genomic sequences, respectively. Thus, the final diagnosis of protothecosis was reached. The latter method is such a powerful diagnostic tool, that even the respective Prototheca species was identified. The cat’s skin disease was caused by Prototheca zopfii genotype 2. Notably, all previously published cases of protothecosis in cats with an identification of the respective Prototheca species were caused by Prototheca wickerhamii. 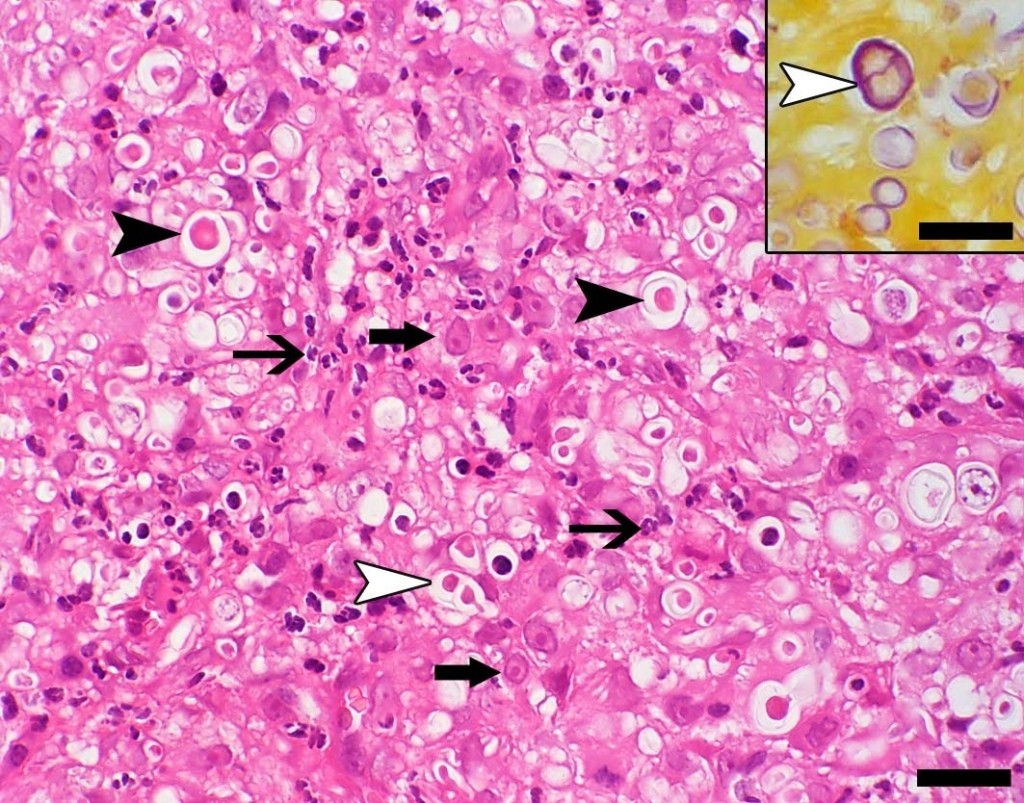 Fig. 2. Depicted are the findings observed during the microscopic examination of the routinely stained biopsy sample (haematoxylin and eosin stain). Tissue inflammation is characterized by the accumulation of mainly two types of inflammatory cells, i.e. neutrophils (thin black arrows) and macrophages (thick black arrows). The affected tissue contains numerous algae (black arrowheads). Their cellular bodies are surrounded by a clear halo representing the capsule. The body of some algae is divided by a septum consistent with endosporulation (white arrowhead). Bar = 20 um.
The inset shows several algal organisms including one with endosporulation (white arrowhead). These are visualized by the use of the Gridley stain. This specific staining technique selectively labels the algae, but not the surrounding tissue. Bar = 15 um.

The further identification of the respective Prototheca subspecies, in this case Prototheca zopfii genotype 2, may give further information about the source of the infection or ways of transmission.