In 1975 in London , an australian researcher, doctor Yvonne Cossart has detected by immunological procedures a new virus in the serum of a blood donor; the name of the blood pocket was B19 so this virus was termed B19. The blood  donor with present viral particles has only fever and shudders. When a virus is discovered all the medical community tries to associate the new virus with clinical signs. It was a success story around 1980 for John Pattison, the Dean of Oxford, and Mary Anderson who associated B19 infections with acute anaemia and eythema infectiosum , a mild eruption in children . 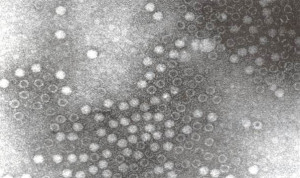 Fig. 1. Detection by electron microscopy of B19 viral particles in the serum of a blood donor.

The erythroid cells in the bone marrow and the spleen  , also named erythroid progenitors, produced red cells ; if the erythroid progenitors are destroyed , as observed with B19 infection, acute anaemia occurred . In general, in healthy people, this acute anaemia is well tolerated . In patients with sickle cell disease , a genetic defect in  the gene encoding the hemoglobin (the oxygen carrier’s) the abnormal red cells are destroyed so after B19 infection , this virus destroyed the erythroid progenitors, the acute anaemia is dramatic, these patients arriving in emergency units with only  4g/dl haemoglobin (Hb) (usually  in healthy people Hb level is between 13 and 16 g/dl) leading to blood transfusion . If B19 infection occurs in immunocompromised patients like AIDS patients chronic anaemia may be observed since these patients cannot build  antibodies to control the multiplication of B19. Finally, if B19 infection occurs during pregnancy, fetal anaemia are very scarcely observed.

B19 virus carries genetic information, a desoxyribonucleic acid (DNA), wrapped by a protein shell as published by Peter Tattersall and Susan Cotmore in Yale; it is a small virus and consequently it  was termed parvovirus (parvum in latin: small). This virus is transmitted usually by  respiratory droplets but as such a virus was detected in the serum of a blood donor , also B19 transmission may be also observed by blood transfusion.

After 30 years of research and teaching in medical and molecular virology I suggest very strongly that  a virus infects you, you are going to keep it all your life in unusual tissues as a general rule; effectively after B19 acute infection you are going to keep B19 notably in synovial cells (cells present in the joints) as demonstrated by Maria Söderlund Venermo and coworkers in Helsinki.

The research is a long way with many hurdles and we must have a continuous scientific mind. Effectively the stereotyped image of the B19 infection with anaemia and mild erythema must be revisited; myocarditis, hepatitis and neurological manifestations may also be observed after B19 infections. Unfortunately there is no antiviral treatment neither a vaccine to control B19 infection , the treatment being essentially symptomatic.

At the era of molecular biology the story of B19 discovery is very instructive ; such a virus was discovered by immunological technical and visualized by electron microscopy (photograph enclosed) and all the associated B19 clinical situations were reported by a continuous and a busy bee work of medical doctors. Remember that AIDS virus was discovered by cell culture from a lymph node of HIV infected patient and in this case the Nobel Prize concluded the discovery, not the story.