An introduction to modelling lymphocyte migration in vitro

Lymphocyte recruitment to inflamed endothelial cells (EC) is fundamental to immune homeostasis – providing both cell-mediated defence against disease, while also contributing to the resolution of inflammation. However, the dynamic relationship between lymphocytes and EC can become dysregulated in disease. Within the inflammatory milieu, we can identify and eventually modulate key players in immune dysregulation, but doing so requires accurate in vitro modelling of leukocyte adhesion and migration.

Fig. 1. Phase contrast micrographs of (A) confluent untreated EC, or (B) TNF-α and IFN-γ stimulated EC following completion of a lymphocyte adhesion/migration assay. Lymphocytes were settled for 6.5 minutes on EC at 37⁰C, and non-adherent cells were washed off and fixed in 2% glutaraldehyde prior to imaging. Surface adherent lymphocytes appear phase bright and round (white arrows) whereas transmigrated cells are phase-dark (red arrows) and can be seen spread and irregularly shaped underneath the EC. Cells in the process of transmigrating may have a combination of phase-bright, phase-grey or phase-dark appearances (green arrows).

In our laboratory, we examine the events surrounding leukocyte migration across the endothelium and into inflamed tissues, using cultured endothelial monolayers as a model (Fig. 1A). To investigate lymphocyte trafficking, EC monolayers can then be treated with inflammatory cytokines such as Tumour necrosis factor-α (TNF-α) and Interferon-γ (IFN-γ) for 24 hours. This allows us to model the extent of inflammation at the point of lymphocyte infiltration; in contrast, EC are only stimulated with TNF-α for 4 hours when modelling neutrophil migration (neutrophil migration occurs earlier than lymphocyte migration). In a static adhesion assay, freshly isolated lymphocytes from whole blood are added onto cytokine-stimulated EC monolayers for 6.5 minutes. Measure of lymphocyte recruitment under flow conditions can also be achieved by culturing EC in commercially available micro-channels. These flow-based adhesion systems allow real-time observations of lymphocyte-endothelial cell interactions at different flow or wall shear rates, allowing us to model a variety of vessel types in vitro. In order to better mimic physiological conditions, both static and flow based assays are carried out at 37°C. Importantly, static assays are fixed with 2% isotonic glutaraldehyde following cell co-culture; this allows the long-term storage of assay plates for later imaging. Phase contrast imaging, in flow or static conditions, allows the distinction between the various fates of adherent lymphocytes (Fig. 1B). A wide range of information can be yielded from static assays, including counts of total adherent cells, percentage changes in trans-endothelial migration and migration velocity in unfixed plates. Additionally, flow-based assays allow detailed information about individual cells to be recorded during initial capture and rolling, the stabilisation of their adhesive interactions and during their transmigration through the endothelial monolayer.

Adhesion assays are versatile preparations that can be modified to examine the recruitment of other immune cells, such as monocytes or neutrophils. The adhesive substrate is not limited to EC; others have used other cell types to assess their ability to drive cell recruitment (such as stromal and carcinoma cells). The versatility of static adhesion assays in particular makes them preferable for high-throughput analysis. Static assays require little specialist equipment or time and allow users to efficiently identify tenable treatment conditions or agents among a large pool of potentials. Although slightly more complex, flow-based adhesion assays model in vivo conditions more closely and their use is preferable for target validation. 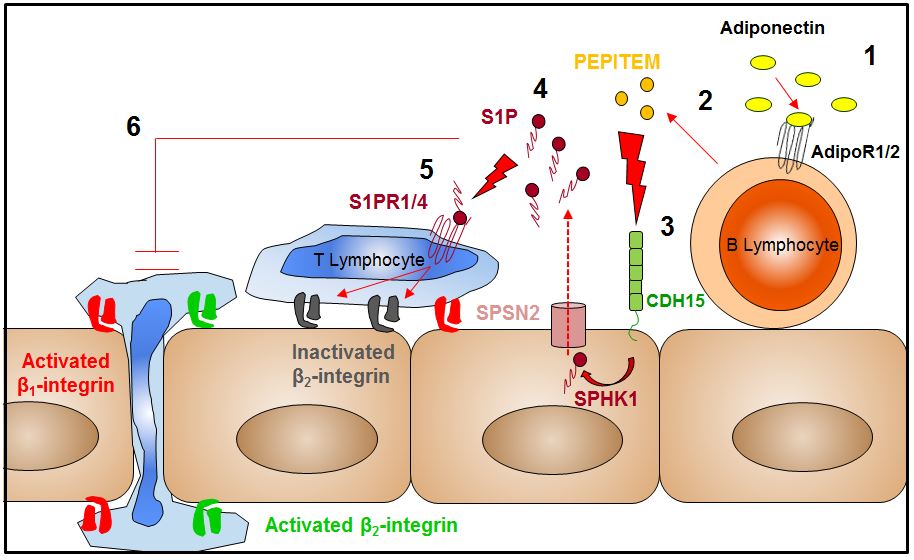 Our laboratory has used static and flow based adhesion assays to further demonstrate the anti-inflammatory effects of the adipocyte-derived peptide hormones, leptin and adiponectin. While adiponectin is responsible for the metabolism of fatty acids and glucose, leptin is involved in the maintenance of body weight through the regulation of satiety. We observed that leptin increased lymphocyte migration through EC monolayers in the absence of inflammation. We have also shown that adiponectin is involved in the regulation of T-lymphocyte transmigration. Adiponectin stimulates the production of a B-lymphocyte derived peptide which indirectly downregulates the affinity of adhesion molecules on T-lymphocytes via induction of endothelial sphingosine-1-phosphate (Fig. 2). The effects of adiponectin have been validated further, in vivo and in vitro. This demonstrates the indispensable role that in vitro modelling of multi-cellular systems has for target discovery in the process of immune cell recruitment.