An ionic liquid in water

Since about the turn of this century, studies on a group of salts called “ionic liquids” (IL) have been gained a large attention. While they are ionic compounds their melting points are much lower than normal inorganic salts; hence the naming “liquids”. Typical constituent cations and anions are shown in Figure 1.  Being liquids, they serve as alternative solvents carrying the characteristics of ionic compounds. They show high electrical conductivity and low vapor pressures, hence they are dubbed by the catch phrase “environmentally friendly solvent”. As is evident from Figure 1, the constituent cations and anions are rather complex, and this provides endless chances of modifying the chemical structure, particularly organic parts of both cations and anions and hence of designing ILs with desired characteristics. 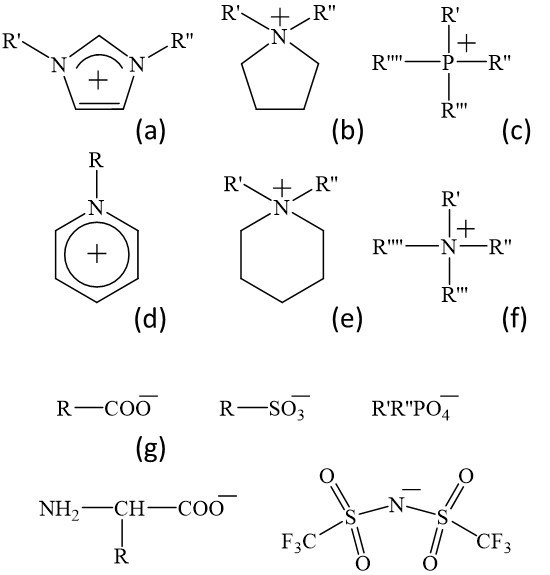 Their aqueous solution also provide convenient media by taking advantage of the way how they mix, what we call “mixing scheme” that depends on the compositional ratio of IL vs. H2O. For some mixtures at certain concentrations phase separations could occur making two liquid mixtures; one floating on top of the other depending on their densities. The mixing schemes also depend on temperature and the phase separations could be observed at higher or lower temperatures than the respective critical combination of the temperatures and compositions. The occurrences of these two phase liquids could also be taken advantage of for a variety of special syntheses.

In aqueous solutions in general, the characteristics of solutes have been loosely classified as hydrophobes, hydrophiles and amphiphiles by human experiences. We have introduced what we call “differential solution thermodynamics”. Figure 2 is our proposed more rigorous classification of aqueous solutions with hydrophobic/hydrophilic/amphiphilic solutes. The ordinate represents what we call the “strength of interactions between i-th solutes”, , and the abscissa is the mole fraction of the i-th solute, xi. The blue pattern in Figure 2 is typical of the aqueous solutions of hydrophobes. The peak top becomes higher and the xi locus lower for the more strongly hydrophobic solutes. The red pattern represents those of hydrophiles. The first bend point turning upward (relatively) is much lower than the peak top for hydrophobes and its value of xi is generally at about 0.1. The purple pattern is for those with amphiphilic solutes. 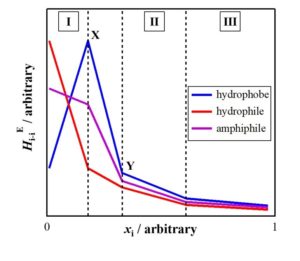 In this paper we studied the aqueous solution of a typical IL, tetrabutylphosphonium trifluoroacetate; combining P(CH2CH2CH2CH3)4+ (Fig. 1(f) with all R’s = (CH2CH2CH2CH3)) cation and CF3COO – (Fig. 1(g) with R = CF3­) anion. We found that the resulting salt is an extremely strong hydrophobe in spite of being an ionic compound. Our earlier study on the constituent ions separately indicated that the cation is a significant amphiphile with strongly hydrophobic and hydrophilic contributions, while the latter anion is a modest amphiphile. Thus, it is a great puzzle why an ionic compound composed of a significant amphiphilic cation and a modest amphiphilic anion acts as an extremely strong hydrophobe in aqueous solution. Further investigation is in progress.