RNA degradative enzymes carry out key steps in regulating gene expression. They are broadly grouped into two groups; exonucleases, that degrade RNA from one end and endonucleases, which cut within the body of an RNA molecule. PMR1 (polysomal ribonuclease 1) is an RNA endonuclease that was originally identified by its ability to degrade specific messenger RNAs (mRNAs) while they were being translated into proteins. 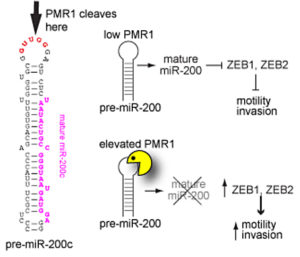 Fig. 1. PMR1 regulation of miR-200 expression in breast cancer cells. The stem-loop structure of the PMR1 target pre-miR-200c is shown on the left, with the cleavage site in the loop region in red and the sequence containing the mature microRNA in purple. The overall observations of this paper are shown on the right. miR-200 is higher under conditions of low PMR1, and this suppresses genes that stimulate motility and invasion. Elevated PMR1 results in degradation of pre-miR-200, leading to a decrease in the mature miR-200 microRNA, an increase in the proteins ZEB1 and ZEB2, and the consequent increase in motility and invasive growth.

This study grew from the unanticipated finding that PMR1 binds within cells to a protein (Mena) that regulates the actin cytoskeleton. The actin cytoskeleton is a network of filaments that determines how cells move, and changes in the actin cytoskeleton drive the movement of cancer cells into surrounding tissue. Cancer cells express the normal version of this Mena and a shorter version that increases cellular motility. PMR1 only interacts with this smaller form of Mena, and in characterizing this interaction we discovered that PMR1 itself also stimulates cell motility.

The formation of breast cancer metastasis is associated with the loss of the miR-200 family of small regulatory RNAs. microRNAs regulate protein production by binding to sequences in their mRNA targets, and this causes a pause in translation that can also lead to degradation of that mRNA. Loss of the miR-200 family results in the increased expression of ZEB1 and 2, proteins that suppress the expression of other genes, decrease in molecules that bind cells together (cadherins) and an increase in proteins that stimulate the actin cytoskeleton. All of these are aspects of an invasive growth program termed ‘epithelial mesenchymal transition’, or EMT.

Analysis of gene databases showed PMR1 is elevated in invasive forms of breast cancer. To test whether there is a connection between PMR1 and invasive growth we engineered non-invasive breast cancer cells to express elevated levels of active and inactive PMR1. Motility and invasive growth were increased in cells expressing active PMR1, but not in cells expressing inactive PMR1. This meant that PMR1 was acting by degrading one or more RNAs, and a survey of microRNAs identified 13 that were reduced by PMR1. Importantly, the miR-200 family constituted the major targets of PMR1. In keeping with this, active (but not inactive) PMR1 caused increased expression of the ZEB1 and ZEB2 transcriptional repressors, and the same actin stimulatory protein that is increased following loss of miR-200. Each of these effects were reversed by restoring miR-200 expression.

The remaining question was how PMR1 selectively reduced the levels of just these few microRNAs. Insight into this came from the biochemistry of PMR1 action and microRNA synthesis. MicroRNAs are made in the nucleus as a precursor (pri-miR) that is processed to an intermediate (pre-miR), which is then exported to the cytoplasm where it is converted to the mature microRNA. The pre-miR forms a stem-loop structure (Fig. 1), that serves as the basis for it’s processing to the mature microRNA. Previous work from our lab showed that PMR1 selectively cuts in the sequence AU/CUG when this is in the loop region of this type of structure. We showed AU/CUG is uniquely present in the loop region of precursors to each of the miR-200 microRNAs, and showed that PMR1 reduces miR-200 microRNAs by cutting in the loop region of their corresponding precursor molecules.

This study provided new insights into the regulation of microRNAs and their participation in cancer. While it is premature to speculate about future developments, the fact that a single RNA endonuclease can have broad impacts on processes central to metastatic cancer suggests this class of enzymes should be evaluated for their diagnostic and/or therapeutic potential.