Tens of thousands of chemicals are used in food, cosmetics and consumer products. In addition, humans are exposed to drugs and environmental toxicants. Safety testing based on animals is too slow and too costly for screening the large and rapidly increasing numbers of chemicals. It may also result in poor prediction of human toxicity due to inter-species differences. Furthermore, animal testing for cosmetics products and ingredients has been banned in regions, such as the European Union (EU) due to ethical concerns. 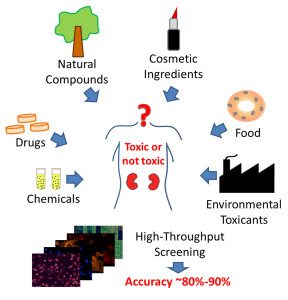 The kidney is one of the major target organs for chemical and drug-induced toxicity, and the kidney cells that are frequently affected are called renal proximal tubular (PT) cells. In 2013, researchers from the Institute of Bioengineering and Nanotechnology (IBN, Agency for Science, Technology and Research (A*STAR), Singapore), led by Dr Daniele Zink, developed the first animal-free platform for the accurate prediction of kidney toxicity in humans. The model used PT cells that had been directly harvested from the body. The source for such cells is limited. Stem cell-based approaches provide an alternative, as stem cells can be expanded indefinitely outside the human body.

Further improving on this, IBN and BII have jointly developed an innovative method based on automated imaging of kidney cells, phenotypic profiling and machine learning that could be used to test much larger numbers of compounds at much lower cost, making it the first high-throughput imaging platform for kidney toxicity prediction. This automated platform is capable of accurately predicting the human renal toxicity of compounds with diverse chemical structures, such as drugs, industrial chemicals, environmental toxicants and natural compounds. It would help companies to develop safer products without using animal tests and would also be useful for governmental agencies. This high-throughput platform will be applied in collaboration with the US Environmental Protection Agency to predict the toxicity of environmental toxicants on the kidney. IBN and BII are currently developing a portfolio of animal-free platforms for the efficient and accurate prediction of toxicity for various human internal organs, such as the liver, lung and the vasculature.