Ankylosing spondylitis: what you should know about spinal fractures

The aim of this review article was to provide the required clinical knowledge that radiologists need to know and the relevant radiological semiotics that clinicians require in diagnosing clinically significant injuries to the ankylosed spine.

Fig. 1. Persistent mechanical back pain during 3-4 weeks in a 57-year-old man with AS. Lateral radiograph of the thoracolumbar spine shows ossification of the anterior longitudinal ligament except for L1-2 level where the bony bridging is incomplete (arrow). This sign raised the suspicion of a vertebral fracture.

Ankylosing spondylitis (AS) is a progressive inflammatory disease of unknown etiology that primarily affects the spine and the sacroiliac joints. The involved anatomical structures undergo a pathological remodeling caused by a multistep process that first causes extensive bone loss and later triggers new bone formation. The basic pathologic lesion in AS is represented by enthesitis or inflammation of the enthesis, term used to define the anatomic structure that joins each ligament to the bone. The widespread enthesopathy of AS causes cortical erosions of the vertebral body corners (Romanus lesion), resulting in a progressive “squaring” of the vertebral bodies, and promotes ectopic bone formation within the affected structures,  leading to ossification of the spinal ligaments, within the intervertebral disks and interapophyseal joints. Bone proliferation processes also manifest with the formation of marginal syndesmophytes, bony bridges that join the adjacent vertebrae until complete ankylosis. In advanced stages, the spinal structural alterations described above result in the characteristic, rigid hyperkyphotic “bamboo spine” (Fig. 1).

Although new bone formation is central to the pathogenesis, AS is also associated with osteoporosis which contribute to the spinal weakening (Fig. 2). In fact, patients with AS have a fourfold fracture risk, during their lifetime, compared to general population. The majority of AS-related fractures occur after low-energy trauma and tend to be highly unstable due to the common involvement of both the anterior and posterior elements of the vertebra (Fig. 2). The lower cervical spine is the most commonly injured segment, due to its anatomic properties and increased mobility, and spinal fractures usually pass through the vertebral body (Fig. 2) or the intervertebral disk (Fig. 1), which represent the weakest points of the ankylosed spine.

Even in the presence of symptoms, AS-related fractures are often clinically overlooked as both the physicians and the patients may erroneously attribute the pain to disease activity. Furthermore, even when a vertebral fracture is clinically suspected, the diagnosis can be difficult on the basis of radiography alone, given the highly abnormal structure of the ankylosed spine (ossified ligaments, osseous proliferation,..) and the overlapping of the shoulder girdles on the lower cervical spine. Therefore, patients with AS presenting with a history of trauma or new onset neck or back pain should be critically evaluate for acute spinal fractures using CT and/or MR imaging, even when radiographs appear normal. The radiographic evidence of ankylosed spinal segments should also alert the radiologist and treating physician for unstable factures in every trauma patient affected by AS.

CT is the reference standard for detecting and defining the extent of spinal fractures and assess the presence and position of bony fragments (Fig. 2). MR imaging detects soft tissues and diskoligamentous injury and may depict bone marrow edema, so it is considered the modality of choice to assess neurologic complications and a reasonable option to exclude occult fractures undetected by CT. 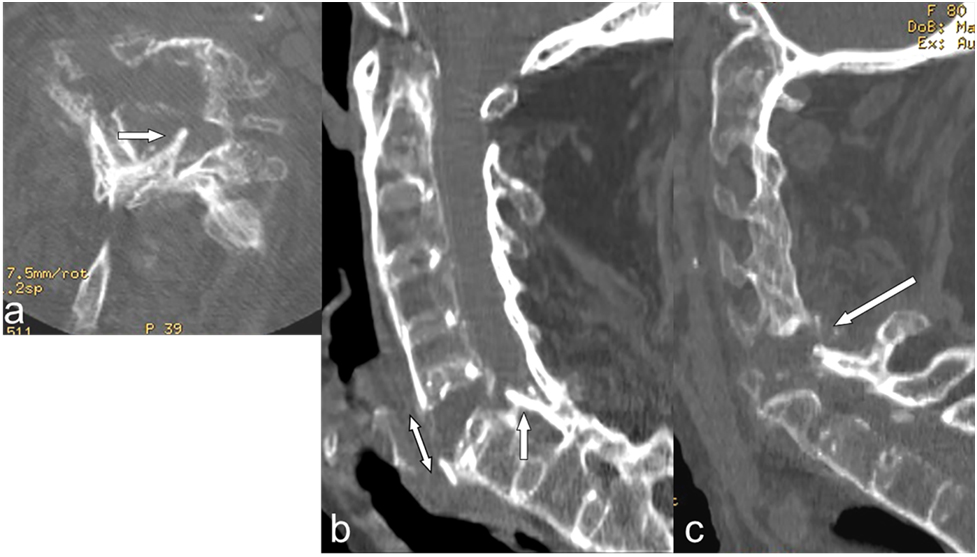 Fig. 2. Transverse fracture of C6 vertebra in a 70-year-old woman, after a fall from standing height, complicated by paralysis in both arms and paresis in both legs. a) Axial CT scan passing through C6 vertebra, b) midsagittal, and c) sagittal to the right of the midline multiplanar reformatted CT images show the highly displaced nature of the fracture involving all three columns of C6 vertebra. Note the severe vertebral osteoporosis, the laminar fragment encroaching the spinal cord (arrow in a and b), the disruption of ossified anterior longitudinal ligament (double-head arrow in b), and the flaval ligament tear (arrow in c).

Management of spinal fractures in AS is controversial and no treatment guidelines are available. However, the unique nature of these spinal injuries makes it imperative that AS patients are treated with extreme caution not only by the surgical treating team, but right from the start by the initial response team, by the accident and emergency staff, and by the personnel carrying out diagnostic investigations, until definitive management is completed.