Anti-aging pills: is it a time for human implementation?

The investigations aimed at human life extension have traditionally raised concerns that it can lead to the growth of the older population and, consequently, to the high prevalence of aging-associated chronic pathologies. Numerous studies have, however, demonstrated that experimental life extension is usually accompanied by delayed or reduced morbidity including cardiovascular disease, neurodegeneration, and tumors. Currently, many pharmacological agents targeting aging-related functional declines and pathological manifestations (‘anti-aging drugs’) are under development. Among them, there are antioxidants (vitamins A, C and E, quercetin, melatonin, coenzyme Q10, fermented papaya preparation, etc.), calorie restriction mimetics such as resveratrol, rapamycin and metformin, autophagy inductors such as spermidine, phytochemicals, e.g., curcumin, genistein, catechins, epigallocatechin gallate (EGCG) etc., putative enhancers of cell regeneration, and several other natural and chemical compounds. In experimental studies, many these substances have been identified as having life-extending properties. The table below presents lifespan-promoting effects of the most promising anti-aging compounds which mimic calorie restriction, observed in widely used model organisms such as nematode worms, fruit flies and mice. 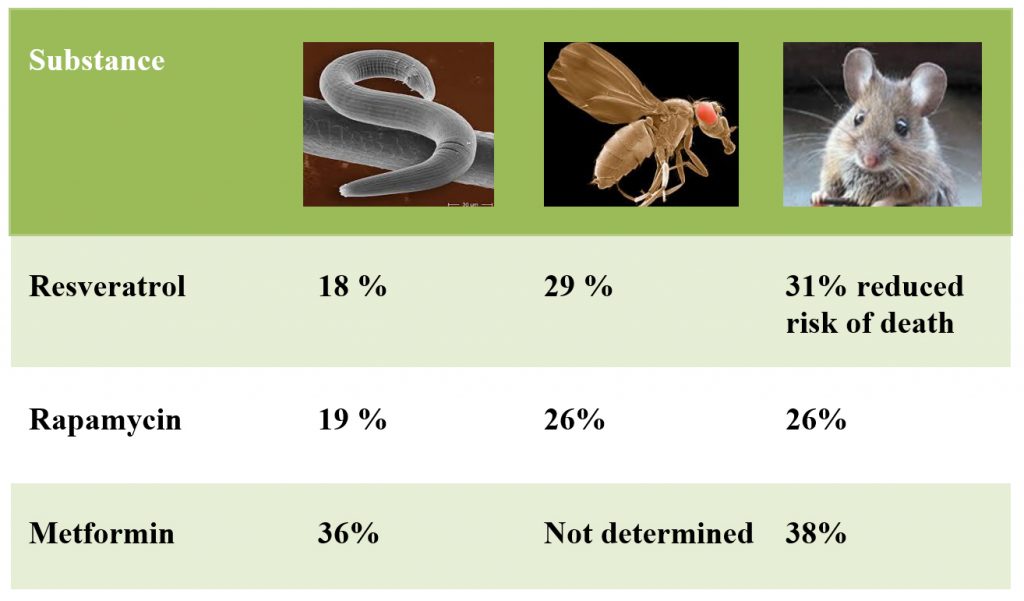 It should be, however, noted that evidence remains limited regarding the overall health benefits of these substances, including epidemiological studies exploring the consequences of their long-term intake for human health. Furthermore, there is evidence that uncontrolled intake of some anti-aging drugs, e.g., antioxidants, can be useless or even harmful.

Currently, the USA FDA does not recognize aging as a medical condition. Such viewpoint, however, seems rather contradictory. Indeed, aging process is normally accompanied by many health problems which are commonly recognized as medical issues. Among them, there are atherosclerosis causing hypertension, heart attacks and strokes, muscle loss resulting in sarcopenia, decrease in bone density leading to osteoporosis, and atrophy of brain tissues causing dementia. All these states are commonly occurring in humans, classified as diseases and require medical intervention. The consequence is that, e.g., in the U.S. more than a quarter of total Medicare spending occurs in the last year of life of elderly persons without any improvement to their quality of life. A growing debate has, therefore, emerged over the past years regarding the issue whether aging could be classified as a disease.

Recently, the FDA policy on the matter became less rigorous. In particular, the examination of the potential of antidiabetic drug metformin in reducing the risk for aging-associated pathologies such as cognitive impairments, cardiovascular disease and cancer in non-diabetic persons has been approved. This agent was chosen for clinical evaluation since it has been previously shown to be able to reduce mortality of patients with type 2 diabetes compared to matched, non-diabetic controls. The goal of the Targeting Aging with Metformin (TAME) clinical trial is to treat 3,000 volunteers aged 70 to 80 years for 5 to 7 years and see whether the development of age-related conditions might be delayed. If successful, this study would be the first demonstration that a particular drug may delay the onset of various aging-associated human diseases. This FDA’s decision can be indicative of the shift of its position on anti-aging pharmacology from the regulations for cosmetic products to updated regulations for prevention and treatment of age-related chronic disorders. It might provide a possible regulatory pathway for further clinical trials of pharmacological agents designed to slow the aging process.

Longevity-Promoting Pharmaceuticals: Is it a Time for Implementation?
Vaiserman AM, Marotta F
Trends Pharmacol Sci. 2016 May