Tuberculosis (TB) is one of the oldest and deadliest airborne asymptomatic tropical diseases in the world, caused by M. tuberculosis (Mtb), infecting one third of the global populace. At present, the emergence of multidrug-resistant tuberculosis and extensively drug-resistant tuberculosis has attracted attention to attain effective prevention, durable cure, and treatment of the distending problems of TB. In fact, Mtb utilizes macrophages for its own replication process and survives under the immoderate radical environment. Mtb arrests the maturation mechanism of phagosomes and prevents the phagosomal acidification. From the last century, BCG vaccine has shown some protective efficacy in combating serious TB. But the lack of protecting pulmonary infections is the poor aftermath of this therapy and has been called into the million-dollar question. In this regard, several anti-tubercular drugs of distinct origins have been developed and used from last few decades. 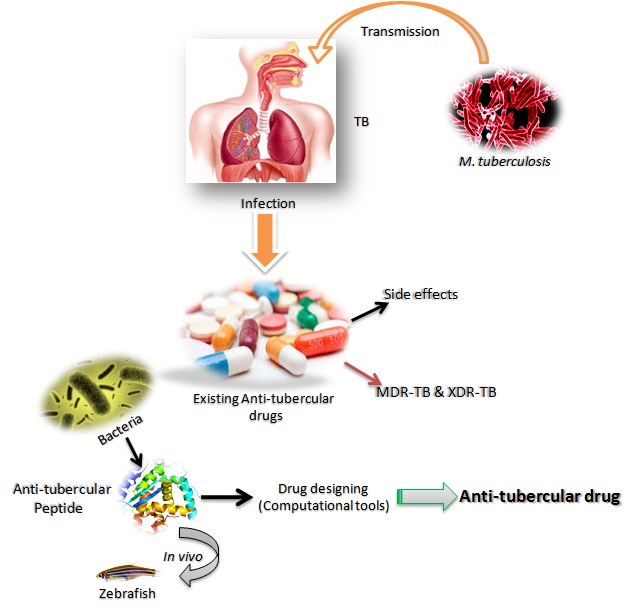 Currently, in the drug developmental pipeline, there are 20 new diagnostic test platforms, 14 TB vaccine candidates in clinical trials and over 35 candidates in preclinical development. Additionally, 4 anti-TB agents are in Phase III trials, 7 anti-TB agents are in Phase II, 5 anti-TB agents are in preclinical development and 3 anti-TB agents are in Good Laboratory Practice toxicity evaluation. But over the last five decades, only two new anti-tubercular drugs (Bedaquiline and Delamanid) were approved and released. Despite the pronounced inhibition of Mtb pathogenesis by available anti-tubercular drugs, the regimens and treatment of TB continues to remain a challenging course with a variety of mild as well as fatal complications due to existing conventional drugs. Although several alternate strategies have ensued in the last few decades in order to combat TB, anti-tubercular peptides from bacteria remain to be the leading alternative due to their versatility nature by virtue of several mechanism and immunomodulation properties.

Anti-tubercular peptides are gene-encoded peptides produced by genera from specific domains, showing direct mycobactericidal activity and playing significant roles in host defense. Anti-tubercular peptides have advantages over other mycobactericidal agents due to low immunogenicity, affinity to prokaryotic negatively charged cell envelopes, and diverse mechanisms of action. These peptides have unique properties not only by creating transmembrane pores but also showing second non-membrane targets within mycobacteria. Comprehensive literatures on the anti-tubercular activities of peptides from varied origins emerged as an idealistic approach towards the TB treatment. Peptides derived from human immune cells, human non-immune cells, bacteria, fungi, venoms, and other sources have been successfully investigated as emphatic anti-tubercular agents.

The application of computational tools such as molecular dynamics, docking, and modelling are often being used in order to understand the protein complexes involved in mycobacterium infections. In silico studies provide opportunities to find the potential drug targets from proteome analysis. At present, the computational approach has replaced the experimental tools in order to understand the physicochemical and structural properties of proteins. In view of the previous in silico studies, docking strategy proved to be an effective approach for the designing and developing new anti-tubercular drugs from the peptides. This novel approach paves a new way for worldwide researchers to investigate further the researches in depth, based on the data obtained through computational studies. The systematic computational analyses conducted in the previous reports may put forth foundation in designing efficacious drugs towards TB therapy.

In a nutshell, the anti-tubercular peptides may be exploited substantially to inhibit Mtb in a relatively shorter time period due to their conceivable mycobactericidal properties and undoubtedly it can be considered auspicious candidates for the development of efficacious drugs in future due to their specific mode of action. An insight into the efficacy of peptides in vivo as well as correlation between peptide structure and molecular mode of action (in silico) will lead to design novel anti-tubercular drugs that might overcome the complications of existing drugs (Fig. 1). Understanding the mechanism of action, immunogenicity, and non-toxicity of the newly discovered peptides from distinct sources will act as therapeutic weapon and it will pave a way for us in order to develop puissant anti-tubercular drugs in future.

Neoteric advancement in TB drugs and an overview on the anti-tubercular role of peptides through computational approaches.
Khusro A, Aarti C, Barbabosa-Pliego A, Salem AZM
Microb Pathog. 2018 Jan