The formation of bacterial biofilm on surfaces occurs naturally and its inhibition and treatment to limit the propagation of infectious diseases is still an unsolved challenge. Traditionally, several antibiotics have been used to mitigate the formation of these invasive colonies. Nevertheless, the growing appearance of multi-drug resistant strains has obliged researchers to find solutions elsewhere. Among others, materials scientists have proposed the development of active surfaces, exhibiting properties (chemical nature, roughness, hydrophobicity) able to inhibit bacterial adhesion and/or viability. With this work, it has been proposed a new and highly efficient active coating based on a nanometric metal organic framework (nanoMOF) and silver nanoparticles with photoactive properties (Ag@nanoMOF composite) to treat these challenging biofilms. 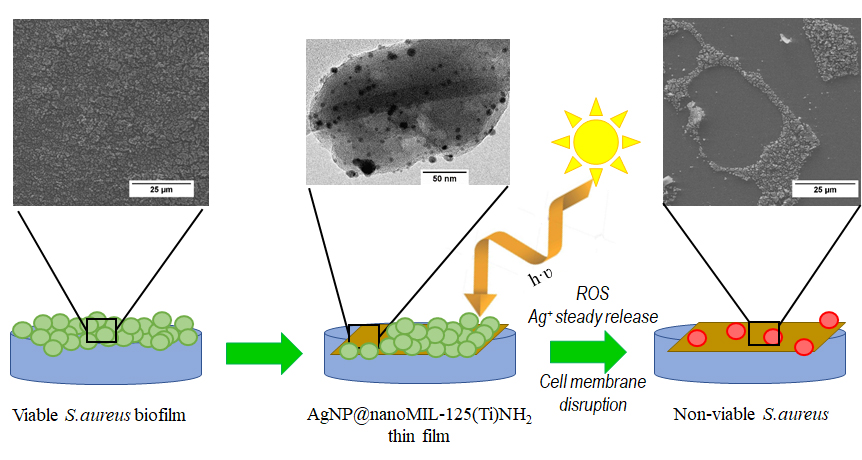 Therefore, the objective of this article is the mitigation of biofilm and its treatment over long periods of time by simple irradiation of these new composite, Ag@nanoMOF, as active surface coatings. This photocatalytic self-cleaning thin film layer could inactivate infectious agents landing on high-touch surfaces such as doorknobs, pressing buttons, rail bars or shopping carts; thereby, breaking the link between contaminated surfaces and transmission through contact.

Three strategies have been combined within a single composite material to provide enhanced bactericidal capacity:

The composite was synthesized by a simple two step impregnation-reduction method. The final Ag@nanoMOF composite coating was dispersed in ethanol and deposited by drop casting over glass covers to attain thin film active coatings, as a proof of concept. The great interaction between the AgNPs and the nanoMOF structure promoted the intrinsic MIL-125-NH2 biocide character. After UV irradiation, the strongly associated AgNPs minimized the electron-hole recombination upon photon absorption, which might enhance the formation of reactive oxygen species (HO•, O2•-, HO2•) in the culture broth. These reactive species are known to interfere with normal bacteria enzymatic activity. This disrupts biofilm formation, leading to bacterial death, and bacteria detachment from the surface. In contrast, a physical mixture of the isolated constituents of the composite (nanoMOF and AgNPs) showed much lower antimicrobial activity.

Further, the coatings were stable (non-detached) after long period of time in contact with bacterial culture broth. On the other hand, the active components (Ag and Ti) were slowly and progressively released, leading to a persistent bactericide effect (> 14 days).

Although MOFs have already been proposed as antibacterial agents against bacterial suspensions (first reports date from 2010), few articles have considered the potential of MOFs as active coatings for biofilm inhibition. Therefore, it is important to outstand that, when published in 2019, this work presented the first MOF-based composite that advantageously combined both bactericidal (>90% remaining bacteria are non-viable) and anti-fouling (anti-adherent) properties (80% of bacteria detached compared to control). In addition, UV irradiation was originally proposed to increase the antibacterial activity of the MOF-based composite.

As a future prospect would be interesting to validate the deposition using different substrates (e.g.: metals, oxides) and multiple methods (e.g.: spin-coating, dip-coating), as well as to control manufacturing parameters such film thickness and adhesion to maximize coating activity with minimum material waste. In addition, would be interesting to expand the application of this biocide antifouling coatings towards the inhibition of biofilm under continuous contaminated water flow.