Antimicrobial resistance – what’s needed but how to get the resources to the innovators?

Antibiotic resistance is at a crisis point, nay a “tipping point”. There are several major programs which offer what sound like large sums of money to make new antibiotics, but to get these monies takes a lot of time, effort and actual money itself. Small creative, often cutting edge groups, simply do not have the manpower to fill in huge documents and then wait for months to get a “yes or no”. Big pharma has all of the above in abundance, but the little groups, sometimes spending their own money, do not. Although the offer of $2 billion sound huge it is not. It takes 8-10 years and over $1.5 billion to develop a new antibiotic. That is ONE antibiotic. We currently are facing growing resistance in many bacterial species globally. Indeed the CDC in USA has a list of some 20+ species that are of concern or much worse in terms of their impact on human health. 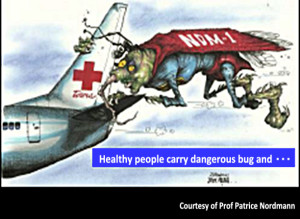 We all travel much more than we did 10 years ago and as a result we transfer the lethal bacteria from one country to another in a matter of hours. Once in “virgin” territory it takes the local doctor’s time to figure out the enemy and by then it has begun spreading within the hospital or worse still the community. A great example is of bacterium that is resistant to almost every antibiotic in the hospital. This occurred in India and within weeks of causing infections in, New Delhi India, it was carried by a passenger on a plane to London England where that passenger became seriously ill. For various reasons his highly resistant bug spread through parts of the hospital and caused several deaths until doctors figured out that it needed many antibiotics given together to just keep the patient alive. This bug, NDM-1 is now one of hundreds of similar almost untreatable causes of infection in both developed and less well- resourced nations around the globe.

In order to slow or maybe reverse this situation we need the moneymen to make access to the funds easier, quicker and to reduce the massive paperwork, multiple committees and general bureaucracy. We simply do not have time to wait for the pen pushers to be certain that one avenue of research is a clear winner. It is important to know that a pharma company will develop many, by that I mean 1,000 chemicals to eventually find one effective and safe antibiotic. So the cost of chasing 999 drugs needs to be accounted for within the company bank balance. Not easy but it has been manageable for antibiotics until it became bad for business around 10 years ago, as the “market” would not and still will not allow appropriate prices to be charged for these new antibiotics. Because we have had easy and cheap access to penicillin and other simple antibiotics we, the Public, expect that to continue. Due to the low price the company is unable to recoup its outlay. Today the public and doctors expect a new Rolls Royce for the price of a 1980 Mini. That is impossible, antibiotics are not simple commodities they are highly sophisticated drugs which work safely and consistently in complex humans.

It does not take a rocket scientist to see that companies cannot simply keep pouring millions and millions of dollars into a losing product line such as antibiotics. As a society we do not understand that unless we provide easier and quicker access to the relatively small, but very welcome, public funds for research programs then we will be facing an antibiotic-free era and illnesses we thought were trivial and treatable will again become killers.

Author thanks Professor Patrice Nordmann, Paris for the cartoon.