Despite opposite reactivities, antioxidants and antireductants have in common that they are valuable tools for damage control (e.g. as antiradicals). In the Review article, examples are given for protective antireduction by biogenic compounds in various fields, ranging from health maintenance over industrial production to ecology. 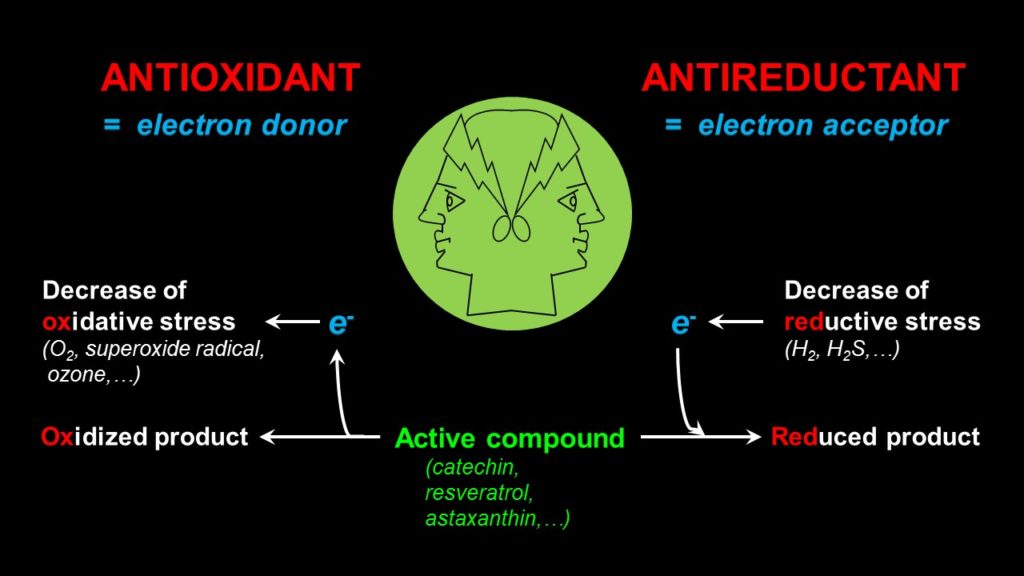 Long before antioxidants started to play a major role on Earth, there was a large need for antireductants. In the primordial atmosphere of the Earth, life could only evolve due to processes, which lowered its toxic hydrogen gas (H2) concentration. The first microorganisms used basic, chemical compounds both for growth, and for protection against H2. In their protective role, these compounds function as antireductants. Later on, oxygen (O2) emerged in the Earth’s atmosphere, generated by the newly evolved plant-type photolysis. The highly oxidising O2 causes oxidative damage to living cells. Under this new challenge, some antireductants proved their versatility and acted as protective antioxidants. Such a double-natured protector, which can either be reduced or oxidized, is termed a Janus-faced compound (after the double-faced Roman god of transition). Janus-faced molecules – with both classical antioxidant and antireductant capacity – are e.g. catechin, resveratrol, and certain carotenoids. Beyond these Janus-faced compounds, the spectrum of antireductants extends to pure electron acceptors (e.g. O2, for plant root and gut protection). Similarly, the spectrum of antioxidants ranges from double-natured compounds to excellent electron donors (e.g. vitamin E) in electron donor-acceptor maps.

Even today, environments exist with a low O2– and a high H2-level, where life profits from antireductive protection. Examples are marsh areas, or the fermenting forestomach of ruminant animals. Quite remarkably, even within most living cells and tissues, reducing capacities are high and O2 levels are low. Particularly the large intestine or tissues under hypoxia are basically O2-free. During evolution, living cells have acquired strategies to thrive in their environment. To this day, all cells are capable of metabolizing a spectrum of multifunctional compounds to meet their vital needs. Moreover, they protect their cellular processes by being able to maintain redox homeostasis: Endogenous antireductants act as a counterweight to antioxidants in order to keep a living cell’s redox status in balance. However, when external influences that cells have to counteract become too extreme, natural mechanisms cannot cope anymore and disease symptoms occur. Intoxication by alcohol consumption, tobacco smoke, or disinfectants (via generation of secondary radicals), or permanent overeating (via a constant overproduction of NADH) can lead to excessive reductive stress. Although the scientific interest in reductive stress has increased over recent years, only little is known about antireductive self-protection by cells, or the interaction of antireductive with antioxidative cellular mechanisms. Research on effects of exogenous antireductants is also still at an early stage.

In summary, antireduction is an ancient strategy, which is still essential for current life, and offers promising perspectives for future applications. Growing environmental and safety concerns stimulate consideration of sustainable natural compounds not only in the health and the food sector, but also in non-biological disciplines. Topical fields such as ‘reductive stress’, ‘electro-biosynthesis’, or ‘mitigation of ruminal methane emission’ all relate to antireduction, and might profit from the knowledge collated in the Review article.

P.M. Becker
IEZ – Institute for Ethnobotany and Zoopharmacognosy
The Netherlands