Toxicants and pathogens often induce death of their target and host cells. In order to investigate the different ways they can achieve this I have used the hepatopancreatocytes of decapod crustaceans as an example, Specifically, I tried to identify the cell organelles in which the pathological transformations started. The hepatopancreas is the central metabolic organ of decapods and is involved in digestion of the food, detoxification of xenobiotics, and immune response. It is composed of hundreds of tubules each consisting of stem cells (E-cells), three structurally and functionally diverse adult cell types (B-, F-.and R-cells), and regulatory M-cells.

The hepatopancreas responds to environmental toxicants by detoxification mechanisms, e.g., storage excretion of heavy metals in lysosomal granules and catabolism of organic xenobiotics by the cytochrome P450 system. If these detoxification pathways are overwhelmed the toxicants cause structural damages in the hepatopancreatocytes. Viral, bacterial, and protist pathogens can be captured and killed by fixed phagocytes that are attached along the arterioles of the hepatopancreas or by the enclosure of infected tissue areas in rigid melanised capsules. Melanisation and encapsulation is the most powerful immune response of decapods. However,o many pathogens can outsmart these defence mechanisms, invade the hepatopancreatocytes and multiply therein.

In the hepatopancreas of cultured shrimp Penaeus monodon, several environmental pollutants and toxic food ingredients induced specific early cytopathological changes, which mostly led to cell death and sometimes to mortalities. For example, KCN and an unknown ingredient of coconut flesh caused depositions of flocculent material in the mitochondria (Fig. 1A). Exposure to water-borne cadmium resulted in the specific disruption of the fibrillar component of the nucleolus (Fig. 1B), which includes the DNA for the production of ribosomes, and subsequent depletion of the ribosomes in the cytoplasm. The cytopathology recorded after feeding of a diet containing leaf meal of the leguminous shrub Leucaena leucocephala started with dissolution of the chromatin in the nucleus (Fig. 1C). The cytoplasmic compartments were only later affected. This remarkable cytopathology was caused by the non-proteinogenic amino acid mimosine that occurs in high amounts in the Leucaena leaves. Exposure to the organophosphorous insecticide dimethoate resulted in complete catabolism of the lipid globules and detachment of larger groups of hepatopancreatocytes from their basement membrane, leading to death of the shrimps.

All viral, bacterial and protist pathogens discussed in my paper induced cytopathologies that ultimately led to lysis of the infected cells and sometimes to mortalities. The cellular transformations after infection with DNA-viruses generally started in the nucleus in which the viruses replicate. An example is Penaeus monodon nudivirus (Fig. 2A and B), which induced hypertrophy of the nucleus and the formation of prominent occlusion bodies. The crystalline occlusion bodies enclose a part of the newly produced virions and persist after lysis of the infected cells. They leave the host’s body via the intestine and serve for spreading of the virus to other shrimps. The RNA-virus Palaemon B-cell reo-like virus caused very specific inhibition of the release of Golgi vesicles from the Golgi bodies (Fig. 2C). Infection of shrimp Palaemon elegans with rickettsia-like organisms primarily affected the rough endoplasmic reticulum because the pathogens multiplied in vacuoles derived from rER cisternae (Fig. 2F). Hepatopancreatic brush border lysis bacteria induced cell lysis in Palaemon elegans by establishing direct end-to-end contact with individual microvilli (Fig. 2E). In contrast, granulomatous hepatopancreatitis bacteria in crayfish Astacus astacus lysed the host cells by sequestrating a toxin into the lumen of the hepatopancreas tubules. 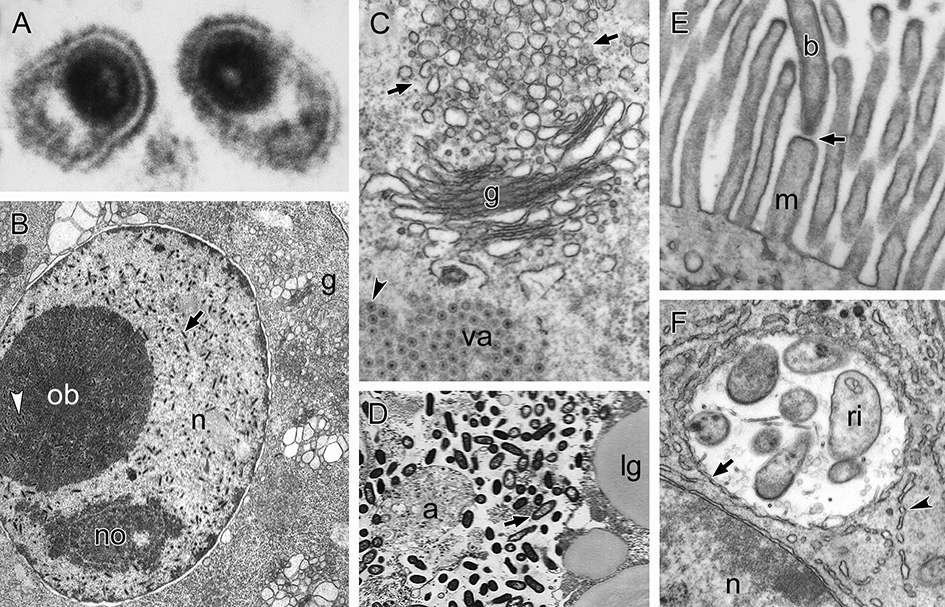 The analysis of dozens of cytopathologies in the hepatopancreas of decapod crustaceans demonstrated that the inducing toxicants and pathogens can either target all cell types equally, one or more cell types preferably, or one cell type specifically. An example of the former is the Leucaena leucocephala ingredient mimosine that acted on E-, B-, F- and R-cells, and an example of the latter is Palaemon B-cell reo-like virus that affected only B-cells. The analysis also showed that cytopathology mostly started with the transformation of a particular cell organelle. Practically all cell compartments can serve as a starting point for the induction of cell death.