Applying nanopharmacology to obstetrics: A novel targeted drug delivery system for the uterus

Pregnancy is a dangerous period for both the mother and foetus. Being born too early (preterm birth) is the leading cause of death and disease in children <5 years of age, while insufficient uterine contractions during or after labour can lead to major obstetric complications, including failed labour, requiring delivery by caesarean section, or major blood loss after birth (postpartum haemorrhage), which is the leading cause of maternal death worldwide. These serious complications are often attributable to abnormal regulation of uterine contractility. 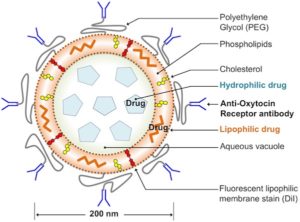 Unfortunately, the ability to provide safe and effective clinical therapy during major obstetric complications is hampered by the toxicity of therapeutic agents. Agents administered to block or enhance uterine contractions also affect other tissues, as such, the lack of specificity of these agents leads to adverse side effects in the mother and foetus. Development of novel strategies to target therapeutic agents specifically to uterine muscle would improve the effectiveness of current treatments while simultaneously minimising the risk of side effects.

Liposomes are nano-scale vesicles (spheres) comprised of non-toxic organic lipids. These small spheres can encapsulate drugs with a broad range of properties, making liposomes versatile drug carriers. Furthermore, liposomes can be modified so that they recognise specific cell surface markers. These ‘targeted liposomes’ have emerged as a reliable and versatile platform for achieving targeted drug delivery to specific cell types, tissues or organs.

Our objective was to develop a targeted drug delivery system for the uterus, which could be utilised to more safely administer therapeutic interventions during pregnancy.

Our findings demonstrate that oxytocin receptor-targeted liposomes are a novel drug delivery system for the uterus. Through specifically recognising the oxytocin receptor, our targeted liposomes accumulate in the pregnant uterus where they successfully deliver either contraction-blocking or contraction-enhancing therapeutic agents. This approach has already proven effective in preventing preterm birth in mice. This world first targeted drug delivery system for the uterus has the potential to increase the effectiveness of current clinical therapeutics, while simultaneously improving safety for the mother and foetus.