Arabinoxylan rice bran (Biobran) for the treatment of Hepatitis C

Hepatitis C virus (HCV) has infected approximately 150 million people world-wide (about 3% of the world population) and causes approximately 700,000 deaths each year.  It has been shown to be a causal factor of liver cirrhosis, scarring and damage to the liver, and hepatocellular carcinoma, the most common form of liver cancer. Current treatments for HCV have severe side effects and are very expensive.  In this study, we explored the use of a novel, non-toxic, and cost-effective treatment of HCV using a natural product from arabinoxylan rice bran known as Biobran. Biobran is a denatured hemicellulose obtained by reacting rice bran hemicellulose with multiple carbohydrate hydrolyzing enzymes from Shiitake mushrooms, and it has been shown to be effective against viral infections. For example, Biobran has been shown to exert anti-HIV activity by inhibiting HIV-1 replication, and it has been shown to prevent symptoms of the common cold in elderly people, causing significant decreases in the common cold syndrome score for cough, malaise, fever, sore throat, and nasal discharge/sneezing. Further studies showed that Biobran is a potent immune modulator with the ability to activate different components of the immune system, such as natural killer cells (NK), cytotoxic CD8+ T cells, and dendritic cells, and it increases the production of interferon-gamma (a protein released by specific white blood cells in response to viral infections) (Fig. 1). These results encouraged us to pursue Biobran’s potential effect on restricting viremia (a measure of viral content in blood) in patients with chronic HCV. 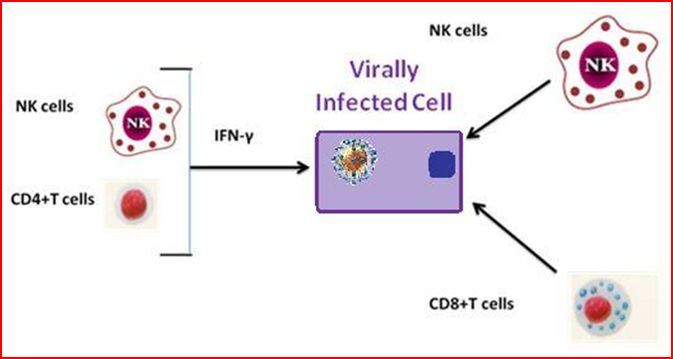 In this study, 37 chronic HCV patients were divided randomly into two groups and treated for 3 months. The parameters under investigation included viremia, liver enzymes (ALT and AST), interferon-gamma levels, and toxicity before and after treatment. The first group was treated with a common treatment (pegylated interferon (PEG IFN) plus ribavirin) while the second group was treated with Biobran (1g/day). Both groups showed significant and similar reductions in viremia after 3 months of treatment relative to their values before treatment. In addition, treatment with Biobran also resulted in a significant increase in the level of interferon-gamma. It is of interest to note that the Biobran group demonstrated no side effects and patients reported good health, while among the PEG IFN plus ribavirin group there was fever, anemia, and thrombocytopenia, and the patients reported easy fatigue. Furthermore, while the cost of standard care therapy (PEG IFN plus ribavirin) for treating chronic HCV genotype 4 in Egypt is $3,000 for a 3-month supply and can be as high as $10,000 in the U.S., the cost of a 3-month supply of Biobran (1g/day) is less than $1,000.

We note that Biobran has been shown to be a unique biological response modifier (BRM) due to its ability to maintain the immune effector cells at high levels over long periods of time, while other BRMs fail to do so (an effect known as hyporesponsiveness). Furthermore, Biobran has been examined for toxicity and been found to be a safe and nontoxic agent: 1) the 50% lethal dose of Biobran is greater than 36g/kg; 2) the Ames test for mutagenicity was negative; and 3) the subchronic toxicity study (28-day dietary study in beagle dogs), the guinea pig antigenicity study, and genotoxic testing all demonstrate that Biobran is nontoxic. Biobran has also been examined for toxicity in humans using blood chemistry analysis, including liver enzymes, and after 1 month of treatment, no abnormalities were detected.

We conclude that Biobran is a potential novel therapy for chronic HCV that is low-cost, safe, and effective. Further studies are warranted to establish its efficacy in large number of patients infected with HCV and for longer periods of time.