Plastics and endocrine active compounds (EDCs) reaching the sea is a very current topic. Global society is beginning to notice plastics accumulating on beaches, in coastal waters and in so-called “Great Garbage Patches” in the oceans. The main environmental interest in EDCs concerns their harmful effect on living organisms as they interfere with the proper functioning of hormones responsible for homeostasis, reproduction and development processes. One  group of EDCs entering the Southern Baltic is that of the phenol derivatives: bisphenol A (BPA) and alkylphenols, 4-tert-octylphenol (4-t-OP) and 4-nonylphenol (4-NP). These are used in food/drink containers, cosmetics, latex paints, car tyres, electronic products, shopping receipts and many other things. Despite their negative effects on organisms, they are still used and continue to accumulate in the sea. Research into the functioning of these compounds in the marine environment has been conducted for several decades, constantly providing new information, and we know that organisms from various trophic levels, including marine mammals and humans, are exposed to their harmful effects. Therefore, with the consent of our Ethics Committee, we investigated live grey seals in the Professor Skóra Marine Station  (University of Gdańsk) in Hel. A breeding herd of seals lives at the station and 2-4 pups are born annually, which are later released into the Baltic. 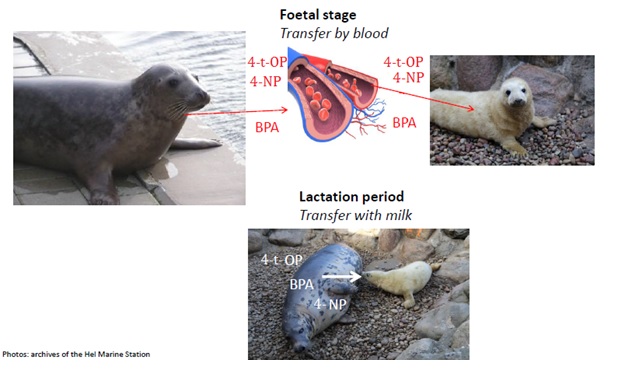 Cooperation with this centre enabled us to conduct unique research into the levels of BPA, 4-t-OP and 4-NP in grey seals and their transfer to the next generation during the prenatal stage and infancy. We were especially interested in the burden of EDCs on pups and their detoxification capabilities. During the 2-year study, we took blood samples from pregnant females every two months, then milk and blood samples from new mothers, and blood and fur samples from pups. The seal centre and Baltic herring (seals’ food) were also monitored. After three months, the now independent pups were released into the Baltic.

The study provided a lot of new information. Interestingly, neither the age of the females nor the number of previous births influenced the concentration of phenol derivatives in their blood. However, a strong relationship was found between their diet and xenobiotics in their blood, proving food to be an important source of EDCs. Pregnant females exposed to high concentrations exhibited greater retention of BPA in the placenta than alkylphenols, which the placenta does not impede, thus demonstrating intergenerational transfer of phenol derivatives in utero. Different amounts of maternal EDC transfer are probably controlled by their physicochemical properties. After birth, the pup undergoes further intoxication with alkylphenols/BPA via milk as the mother’s organism detoxifies and eliminates xenobiotics. During this period, BPA, 4-t-OP and 4-NP in her blood drop by 25-65%, and fur becomes a secondary detoxification mechanism. Although the young body lacks the full capacity to metabolize and remove toxic compounds, there is a proven limit for phenol derivatives in the blood of 10 ng∙cm-3, above which the pup’s defense processes are triggered. A high xenobiotics load exceeding the limit at which the pup is born initiates activation of enzymes involved in the metabolism of xenobiotics faster than at low concentrations. Dilution of phenol derivatives in the pups’ blood occurs during lactation, when the greatest weight gain (up to 30-40 kg) takes place. This phase of life should therefore be considered decisive for their condition and it should be concluded that during infancy in the seal centre phenol derivatives do not threaten their health and life.