Previous research has suggested that children with cerebral palsy (CP) have difficulties with visuo-spatial perception. We wanted to find out if there was an association or relationship between the children’s visuo-spatial abilities and the development of their mathematical skills. 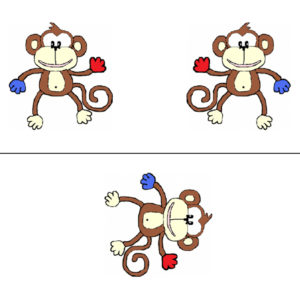 Fig. 1. Computerized rotation task. The children had to match the monkey at the bottom with one of the two monkeys at the top. The task was completed on a computer and the bottom monkey moved through four angles: 0⁰; 90⁰; 180⁰; and 270⁰.

Thirty-two children with CP (mean age 13:07 years) were matched with thirty-two children with typical development, TD (mean age 8:06 years) by their receptive language (vocabulary) abilities. The CP group were children with predominantly either quadriplegic spastic or athetoid CP or a mixture of both and were selected to have sufficient verbal communication and manual dexterity to complete the tasks. All the children completed a basic Maths test (Wide Range Achievement Test: WRAT4) made up of two sections. The first section was an oral test consisting of basic skills that might be understood by children aged 7 years; and a second section which was a written test consisting of calculations, the four rules of number, decimals and fractions. The second test was scribed for the children if they were physically unable to write. The children also completed four cognitive assessments relating to the children’s visual or spatial perception skills: a visual and spatial perception test consisting of seven subtests; a non-verbal (matrices) reasoning task; a computerized rotation task (Fig. 1); and a visual memory recall test involving blocks.

It was found that the children with CP had poor mathematical skills in comparison to the TD group with many of the group having difficulties with the second section involving calculations. They also had impairments with all the visual and spatial tests, particularly the visual-spatial perception test (The Test of Visual Perception Skills) in which all the children, even the most able, scored at very low levels. This suggests that visual perception impairments, rather than more general cognitive processing (memory, executive functioning, general problem solving), might be the primary disability, and there was evidence from correlations that visual memory was both severely impaired and related to mathematical ability. Consequently, there is the possibility that performance on some cognitive and mathematical assessments is impeded by impairments in basic visual and spatial perception rather than the cognitive demands of the tasks.