Astrocytes were long thought to play only a supporting role in the central nervous system. However, the discovery that Ca2+ transients in astrocytes are coupled to the enhancement or depression of neuronal activity has led to the recognition that astrocytes may play a substantial role in neural information processing. Since then, many details of a bidirectional communication between astrocytes and neurons has been demonstrated. Astrocytes express various neurotransmitter receptors the activation of which leads to the mobilization of Ca2+ from intracellular stores. In turn, astrocytes release neuroactive substances called gliotransmitters which modulate neuronal excitability and synaptic transmission. Among other molecules, endocannabinoids are also implicated in this bidirectional signaling. In addition to neurons, astrocytes also express functional cannabinoid type-1 receptors (CB1-R) and have the potential to produce one of the best-known endogenous CB1-R agonist 2-arachidonoylglycerol (2-AG). 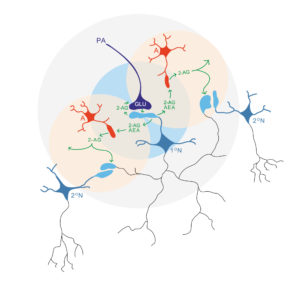 Fig. 1. Schematic representation of the neuron-astrocytes-neuron bidirectional endocannabinoid signaling in the superficial spinal dorsal horn. For detailed description see the text. PA: nociceptive primary afferent; A: astrocyte; 1oN and 2oN: first order and second order neuron; 2AG: 2-arachidonoylglycerol; AEA: anandamide. The colored circles indicate the areas into which the endocannabinoids can diffuse out from the postsynaptic dendrite of a synapse formed by a nociceptive primary afferent and a spinal primary sensory neuron (blue area), and from astrocytes activated by endocannabinoids released by the first order postsynaptic neuron (beige and gray areas).

Although astrocytes express CB1-Rs and diacylglycerol lipase alpha (DGLα, the synthesizing enzyme for 2-AG) the spatial co-expression of these proteins in astrocytes has never been investigated. In addition, though activation of CB1-Rs on astrocytes leads to Ca2+ mobilization and Ca2+ transients may evoke the production of 2-AG, 2-AG release from astrocytes evoked by CB1-R activation has never been demonstrated. Filling up these gaps in our knowledge seems particularly important given that endocannabinoid mediated neuron-astrocyte-neuron signaling appears to be crucial in many functions of the central nervous system including pain processing in the spinal dorsal horn. Therefore, we investigated whether spinal astrocytes can release 2-AG in response to activation of their CB1-Rs.

First in the literature, we showed that rat spinal astrocytes co-express CB1-Rs and DGLα in close proximity to each other. We also demonstrated that activation of CB1-Rs evoke a substantial elevation of intracellular Ca2+ concentration in astrocytes. Finally, we revealed that the evoked Ca2+ transients lead to the production of 2-AG in spinal astrocytes. The results provide direct evidence for the existence of a cannabinoid induced cannabinoid release mechanism in spinal astrocytes. This new discovery unifies previously separated and seemingly unrelated ideas, and indicates that endocannabinoids play a major role in neuron-astrocytes-neuron bidirectional signaling.

In general, the astrocytic 2-AG-mediated signaling may represent an important form of astrocyte-to-neuron communication, because, depending on the spatial distribution and actual activation pattern of excitatory and inhibitory synapses expressing CB1-Rs, the release of 2-AG from astrocytes can either depress or enhance the net activity of local neural circuits within a given spatial compartment.

In the superficial spinal dorsal horn, in particular, the endocannabinoid-mediated bidirectional communication between neurons and astrocytes may play a unique role in spinal pain processing. Here, the endocannabinoid signaling apparatus is primarily initiated by nociceptive primary afferents, which activate spinal neurons. In case of strong stimulation of primary afferents, postsynaptic neurons can release 2-AG which binds to presynaptic CB1-Rs resulting in a transient depression of synaptic activity. A fraction of 2-AG, however, can diffuse out from the site of release and activate CB1-Rs on adjacent neurons and astrocytes. The activation of CB1-Rs on astrocytes then leads to Ca2+ mobilization in astrocytic processes, and the activated compartments may further release 2-AG. This may act locally but may also diffuse out and act on neural CB1-Rs, thereby affecting the functional properties of spinal neurons remote from the termination field of the originally activated nociceptive primary afferents. Thus, because of the involvement of astrocytes, the primary afferent-evoked original activity, initially limited to a relatively small area, may ultimately influence the functional properties of excitatory and inhibitory synapses in a much wider field, and thus may play a substantial role in the modulation of spinal pain processing.