In recent years, it has been demonstrated an increasing role of astrocytes in information processing and cognitive functions, which depends on the close relationship between neurons and astrocytes into the cerebral cortex. The mammalian cerebral cortex is fundamentally composed by neurons and astrocytes organized in two closely related three-dimensional structures. Neurons are organized in layers and columns and communicate each other through synapses, while astrocytes are connected each other through intercellular channels (gap-junctions) forming a complex structural and functional syncytium. In addition to synaptic neurotransmission, other non-synaptic mechanisms called ephaptic interactions have been considered critical for coupling and synchronization of neurons in the cerebral cortex. 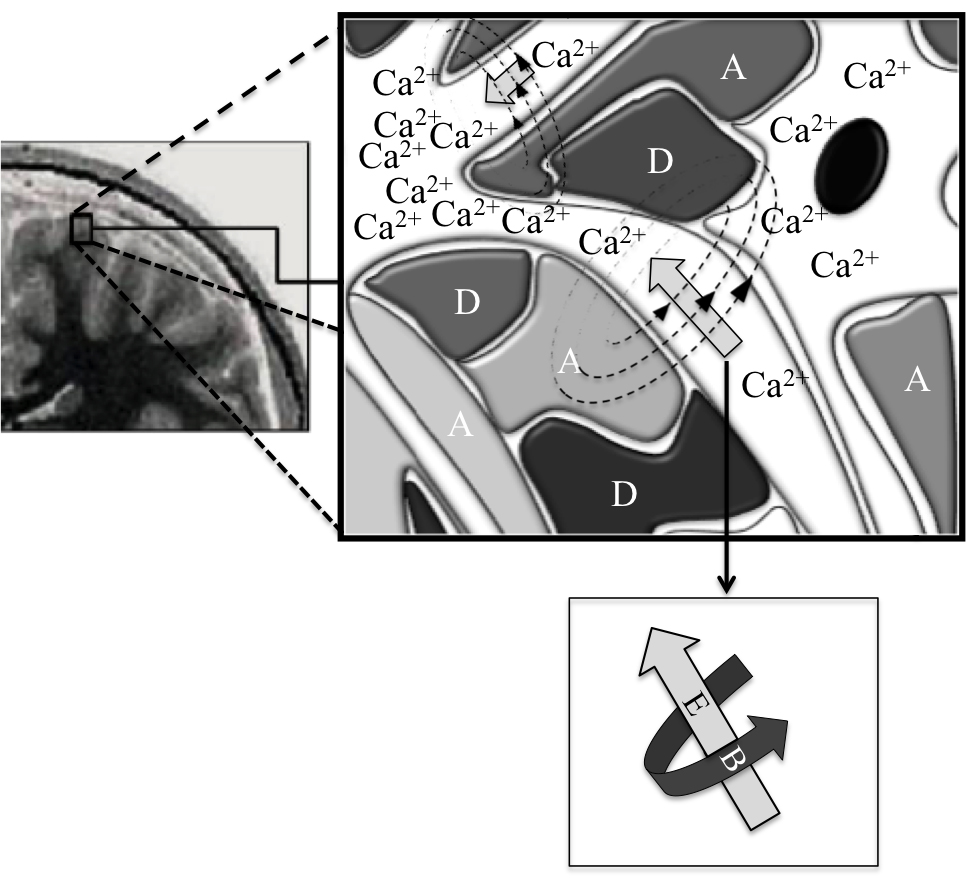 Fig. 1. Schematic representation of the ultrastructure of the neuron-astroglial organization in the neocortex. Astrocytes are stellated white cells with a black nucleus. Neuronal axons (A), and dendrites (D) are surrounded by the astroglial matrix. The extracellular space is near virtual (10-10 m) in physiological conditions. The addition of synaptic currents, action potential currents and astrocytic ionic currents generate local field potential (LFPs) in the intercellular space. Ca2+ waves generate current gradients into the astroglial network with their inherent bio-electric (E: grey arrows) and bio-magnetic (B: black head arrows) fields that modulate adjacent neuronal behavior by influencing the LFPs.

These ephaptic effects are due to the summation of all sources that contribute to the extracellular local field potential (LFP) in a point of the cortex, which results from the addition of synaptic currents, action potential currents, and astrocytic ionic currents. The effects of the action potentials and astrocytic ionic currents have been considered negligible in comparison to the contribution of synaptic currents. Therefore, the role of astroglial electric and magnetic fields in information processing has been scarcely studied. However, astrocytes have been shown to communicate with each other using different types of calcium (Ca2+) waves, which travel from cell to cell through gap junctions. Indeed, recent studies have demonstrated large-scale Ca2+ waves propagating at 61 μm/s from one astrocyte to the neighboring astrocytes. These waves were associated with a reduction in neuronal activity and LFPs in the hippocampus. Interestingly, these large-scale Ca2+ waves were associated with the strongest reduction in neuronal activity at very slow frequencies (<0.5 Hz). Besides, other types of astrocytic Ca2+ waves have been reported, which propagate around 10-20 μm/s in brain slices and cultures, and at 30-40 μm/s in spreading depression. The different speeds of Ca2+ waves through the astroglial network suggest that they have different physiological functions probably including effects on the LFPs.

From an ultrastructural perspective, the extracellular space in the mammalian cerebral cortex is a very narrow space among the cytoplasmic membranes of neurons and astrocytes (Fig. 1). This intercellular space has a low electrical resistance that makes it a preferred pathway over trans-membrane paths for induced currents of endogenous electric and magnetic fields. The electrophysiological correlation between astrocytes and neurons has been attributed mainly to extracellular changes of ionic currents following a complex spatial and temporal fluctuation in which the astroglial syncytium plays a fundamental function regulating the resting potential as well as the excitability of cortical neurons. In fact, it has been demonstrated a high concordance between the amplitude of the magnetic fields of neurons obtained by experimental and theoretical approaches, supporting the concept that bio-magnetic fields generated into the cerebral cortex can have enough amplitude to be biologically active.

Therefore, the orientation of neurons and their anatomical relationship with astrocytes in the human cerebral cortex seems to be a critical factor determining the effects of bio-electric and bio-magnetic fields produced by neuronal currents, which can modulate adjacent neurons and astrocytes by ephaptic interaction in the adequate intra-cortical topology. Besides, bio-electro-magnetic fields generated by ionic currents in the astroglial syncytium may likely modulate feedback the activity and coupling of neighboring neurons by a direct magnetic modulation of the intercellular LFPs.

Recent interest in this issue comes from the fact that extra-cranial electric and magnetic field stimulations have shown therapeutic actions in the clinical practice. The article reviews the current knowledge regarding the ephaptic effects in mammalian neocortex and proposes that astroglial bio-magnetic fields associated with Ca2+ transients could be implicated in the ephaptic coupling of neurons by a direct magnetic modulation of the intercellular LFPs.