Rhinoviruses are a diverse set of very small and common viruses, repeatedly infecting humans in the course of a single year. For most people, infection usually results in mild common cold symptoms, and spontaneously resolves without the need for any clinical intervention. However, individuals of older age and with chronic respiratory illnesses may have a much serious condition that may require hospitalization and in extreme cases may be life threatening. Despite its common nature, transmission routes are not definitively established but probably include human to human direct respiratory aerosols transfer and indirect transmission via respiratory small particles deposited on surfaces (fomites). Susceptibility to infection and severity of symptoms vary widely in the population, but susceptibility or severity factors remain largely unknown. 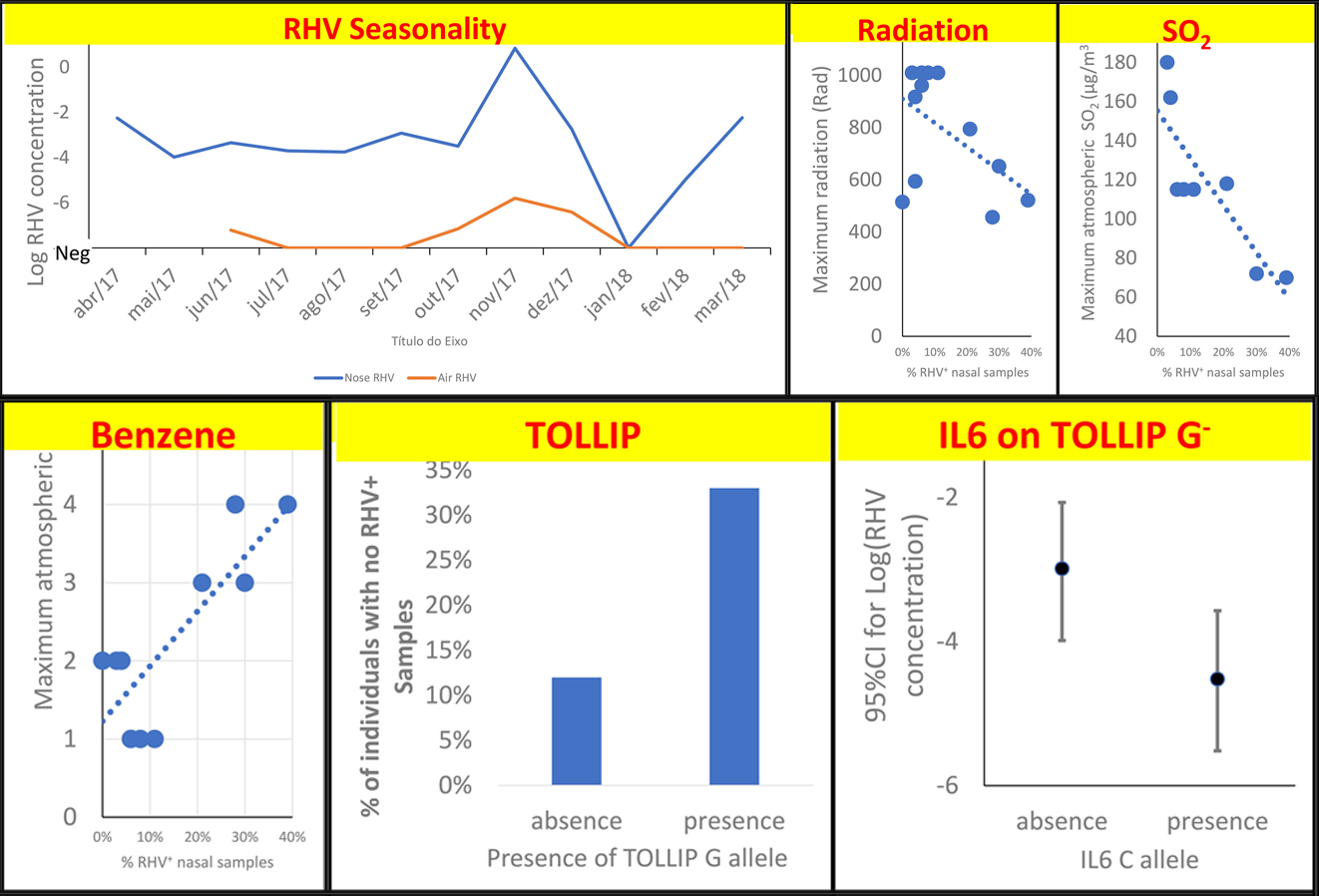 Fig. 1. RHV detection in the nostrils of voluntaries during a one-year period shows its presence during the whole year, but with peaks in the spring and autumn. Atmospheric parameters (Sun radiation, SO2 and benzene) were found to correlate with RHV circulation. Genetic polymorphisms in TOLLIP and IL6 genes were also found to impact on RHV nasal detection.

During a one-year period, a set of healthy university student voluntaries had their nostrils monthly tested for the presence of rhinoviruses by RT-qPCR. Voluntaries were also genotyped for a set of immune system related polymorphisms and monthly respiratory symptoms and pre-existing respiratory and/or allergic conditions were enquired. During the same period, outdoor and indoor air samples were collected and tested for rhinovirus by the same method, and meteorological and air quality parameters were collected from the public station network.

Rhinovirus was detected in the nostrils of voluntaries all year round, as was expected from a very common pathogen. However, seasonality was also observed as increased frequency of positive samples and of nasal viral titres were found in spring and autumn (Fig. 1). Contrary to our expectations, no rhinovirus was detected in indoor air-samples, a finding that may be related to the unintended proximity of the collection point to an air conditioning air exhaust that may have provided essentially clean filtered air to our sampling instruments. On the contrary, rhinovirus was found in outdoor air samples in late autumn (Fig. 1). As the collection point for this samples was at the level of the 3rd floor, this finding seems to suggest that Rhinovirus can be transported at long distances and at some elevation from the ground, suggesting a potential role for atmospheric airborne viral particles in infectivity. The same seems to be supported by the finding that Sun radiation and atmospheric SO2 correlate negatively to the frequency of nasal positive samples, possibly by inactivating airborne atmospheric viral particles. An inverse effect was observed for benzene levels with increased levels correlating to increased frequency of rhinovirus positive nasal samples (Fig. 1), suggesting a role by impairing the immune system reactivity (Fig. 2). Genetic variants in IL6 and TOLLIP but not in TNFA or IL1B were also found to correlate to rhinovirus detection in the nostrils of voluntaries (Fig. 1). TOLLIP action may involve its action on TLR2 expression, a molecule needed to detect and clear viral particles before infection (Fig. 2), thus impacting the capacity of voluntaries to always remain virus free. On the other hand, IL6 action may be related to the intracellular response to the virus after infection is established, thus impacting viral concentrations (Fig. 2). 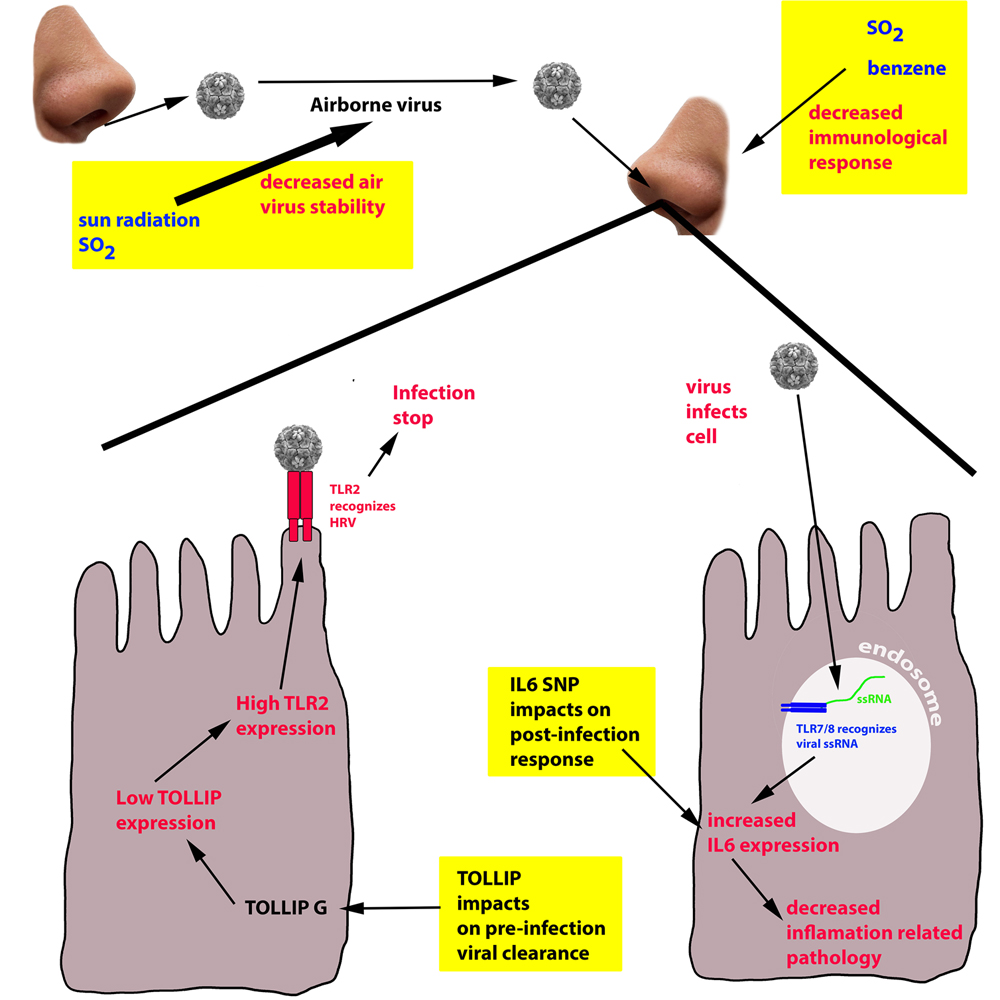 Fig. 2. The results suggest that RHV may be transmitted through air, where it can be negatively affected by sun radiation and SO2. Atmospheric benzene and SO2 levels may also impact on the individual’s immune system capacity to fight RHV. In the nostrils, RHV early detection and clearance depends on TLR2 whose levels are impacted by TOLLIP expression. Once the virus has infected the cell, its detection shifts to TLR7/8 that exert its effect via IL6.

The results suggest that rhinovirus may be transmitted by aerosol particles, not only by direct contact but also by airborne atmospheric particles, and its infectivity may be impaired by sun radiation and SO2 levels (Fig. 2). Atmospheric benzene was also found to impact infectivity possibly by its impact on the immune system status (Fig. 2). Additionally, two immune system related genetic variations were found to impact the capacity to stay infection free the whole year (TOLLIP; Fig. 2) or to effectively control viral concentration (IL6; Fig. 2).