Macroautophagy (hereafter autophagy) is the main intracellular degradation mechanism to maintain cellular homeostasis by degrading misfolded proteins, recycling dysfunctional organelles, and generating energy fuels under physiological and pathological conditions. Autophagy consists of two major steps: autophagosome formation, including the nucleation—elongation—closure of the double-membrane vesicles, and subsequent fusion of lysosome and autophagsome, forming the autolysosome, where the degradation occurs. Fip200 (FAK-family Interacting Protein of 200 kDa) and Atg5 (Autophagy-related 5) are two essential autophagy genes that function at different steps of autophagy: Fip200 is essential for autophagy induction and Atg5 is essential for elongation of the autophagic membrane (Fig. 1). In recent years, numerous studies have showed that dysregulated autophagy is linked to many human diseases such as neurodegenerative disorders, myopathies, cardiac diseases, fibrosis of liver and lung, immune disorders, and cancer.

Fig. 1. Autophagy consists of two major steps: autophagosome formation and subsequent fusion of lysosome and autophagosome, forming the autolysosome, where the degradation occurs. Fip200 (FAK-family Interacting Protein of 200 kDa) and Atg5 (Autophagy-related 5) are indispensable at indicated steps and they work with other autophagy genes (not shown here) to initiate and complete autophagy.

Investigations on the role of autophagy in skeletal system are of interest in recent years. The autophagy function has been suggested to play important roles in human bone health. Appropriate autophagy function is required to support bone development and homeostasis. Compared to other parts of skeleton such as long bone and vertebrae, the craniofacial bone has more complex osteogenesis. For example, craniofacial bones has dual embryo origins (neural crest and mesoderm) and dual ossification pathways (intramembranous and endochondral ossification) (Fig. 2). Despite the gradual understanding of autophagy in general skeletal homeostasis, its role in craniofacial bone formation and homeostasis is unclear.

We previously reported that autophagy suppression by deleting Fip200 leads to decreased bone mass in femurs and vertebrae in mice and compromises osteoblast mineralization. In this study, we deleted Fip200 and Atg5 in osteoblast lineage cells using Osterix-Cre to investigate the effect of autophagy suppression on craniofacial bone acquisition. Our data demonstrated the important role of autophagy in craniofacial bone acquisition during development and postnatal growth. Interestingly, our data showed that autophagy suppression compromises the craniofacial bone acquisition to different degrees in bones formed through different ossification pathways. Cranial vault (such as frontal and parietal bones) and cranial base bones (such as presphenoid and basioccipital bones) are formed through intramembranous ossification and endochondral ossification respectively. Our data demonstrated that autophagy suppression by either Fip200 or Atg5 deletion had bigger negative impact on cranial vault bone acquisition, indicating autophagy may play bigger role in the intramembranous ossification. In addition, our data showed that Fip200 deletion led to a bigger bone mass reduction in neural crest-derived bones (such as frontal and presphenoid bones) than in mesoderm-derived bones (such as parietal and basioccipital bones), which may be partly explained by the reported intrinsic biological difference between neural crest-derived osteoblasts and mesoderm-derived osteoblasts. Lastly, our data showed a bigger decrease in bone mass in craniofacial bones deficient of Atg5 than those deficient of Fip200. 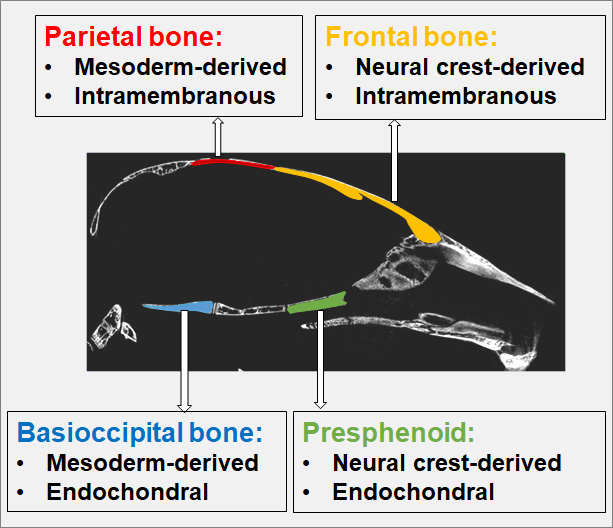 Although this difference may be explained by the higher deletion efficiency of Atg5 compared to Fip200 by Osterix-Cre, the alternative explanation is that this difference was caused by the autophagy- independent roles of Fip200 and/or Atg5. Indeed, a common challenge in autophagy research field is that all autophagy genes have autophagy-independent functions. Thus, a crucial issue is how to prove that a phenotype and associated mechanism observed in autophagy mutant organism/cells is indeed solely caused by autophagy defect per se. With the availability of a novel FIP200-4A mutant knockin mouse model in which only the autophagy-specific function of Fip200 is disrupted in vivo, we will be able to determine the specific contribution of autophagy to skeletal and craniofacial bone homeostasis in the near future.