Back to the future – looking at COPD with new eyes

Chronic obstructive pulmonary disease (COPD) is a broad term for diffuse lung disease caused by chronic inflammation of the airways. Patients with COPD become increasingly short of breath and often start to feel as if they are suffocating. The most common cause of COPD is tobacco smoking, but it is also associated with air pollution and chronic dust inhalation such as is common in the mining and agriculture industries. In 2004, COPD was the fourth leading cause of death worldwide; it is expected to become the third leading cause of death by 2030. COPD is irreversible, but some studies have shown that early recognition of signs and symptoms of COPD can improve health outcomes by preventing progression of disease. 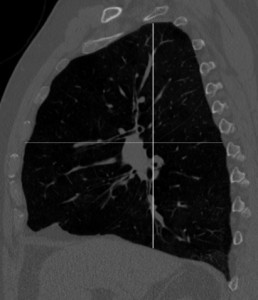 Currently, COPD is diagnosed via lung function tests that look at how much air a person’s lungs can hold and how quickly they can exhale. However, despite these tests being the gold standard for diagnosing COPD, studies have shown that fewer than 40% of people diagnosed with COPD have ever had these pulmonary function tests (PFTs) performed. Getting PFTs performed requires that patients be referred to a lung specialist who first evaluates the patient and then orders the test – a process that can take weeks to months. Many of these patients, however, come into the hospital with other complaints and end up getting computed tomography (CT) scans of their chest. If doctors could identify features of COPD on these CT scans it could enable earlier detection of disease which could help slow the progression of this incurable disease.

There are some well-established CT features of COPD like emphysema and air trapping. However, many patients with COPD do not have these abnormal imaging findings, decreasing the usefulness of CT scans as a diagnostic test of COPD. It was known from past studies of chest radiographs that the most accurate means of detecting COPD on imaging exams was to detect hyperinflation (over inflation) of the lungs on the lateral (side view) chest radiograph. Researchers at the University of Pennsylvania decided to go “Back to the Future” and see if the old chest radiographic measures could be modified for modern CT examinations. 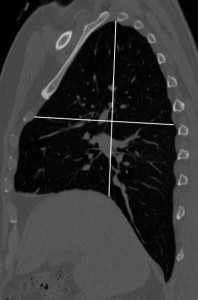 Fig. 2. Lungs without hyperinflation in a patient without COPD

These newly described imaging features were found to be more accurate predictors of COPD than traditional measures such as emphysema and air trapping, and had less variation in interpretation between different readers. Most importantly, these new measures were able to identify 27-70% more patients with COPD than traditional findings, indicating that the use of these new features in reading CT scans of the lungs could help identify patients with COPD who would otherwise have gone unrecognized.

While lung function testing is still the gold standard for the diagnosis of COPD, use of sagittal reconstructions on CT scans to look for evidence of obstructive airway disease may increase the detection of COPD by CT. At the very least, these features will help radiologists better direct clinicians to look for definitive evidence of COPD on PFTs, thus improving the early detection of this disease and early initiation of treatments.

Jessica Hightower
Perelman School of Medicine at the University of Pennsylvania, PA, USA