Beneficial dust like a wall protecting a castle: the role of orchid seed coat in restricting the invasion of fungal hyphae

Plants are often thought of as producing their nutrients through photosynthesis, but many plants associate with other organisms (microorganisms) to exchange nutrients for survival. In particular, orchids, which have threatened many species with extinction due to habitat modification, climate change, and over-collection, are unique: They are highly dependent on carbon and other nutrients provided by symbiotic fungi at germination and early growth stages. However, in the soil where seeds germinate, there are not only symbiotic fungi but also various fungi, including pathogens. Hence, recruiting appropriate symbiotic partners from among them is indispensable to initiate symbiotic seed germination. 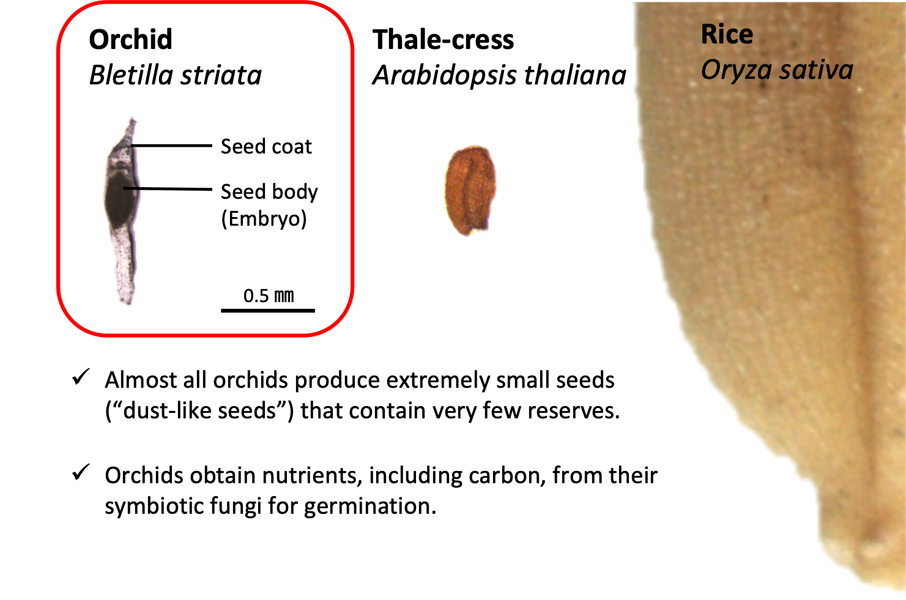 Orchids typically produce numerous small seeds (dust-like seeds), which consist only of a seed body (an undifferentiated embryo) and a rather brittle seed coat (Fig. 1). The seed coat is generally fusiform and (semi-)transparent, with variable surface patterns depending on the genus or species. The various ultrastructures of orchid seeds are considered to adapt to the seed dispersal mode. However, our understanding of the functional and ecological consequences of this structural variation is still limited.

This study aimed to better understand the recruitment of symbiotic fungi at the symbiosis initiation stage, focusing on the orchid seed coat since the seed coat is the first point of fungal attachment. We used an experimental system for symbiotic germination of a terrestrial orchid, Bletilla striata, which is usually found on sunshiny moist grassland and known as a common garden plant in Japan, on an agar plate. B. striata seeds (approximately 0.2 mm long), some with the seed coat removed, were prepared and sown with symbiotic fungi or with pathogenic fungi. Peeling the seed coat was done in a very simple way, using only a dissecting needle under a stereomicroscope (but you have to be good with your hands and endure eye strain!). The seed coat-stripped seeds inoculated with the symbiotic fungi showed a lower germination rate than the intact seeds. Intact seeds that successfully germinated established symbiosis at the side where the root emerges (suspensor side of the embryo) (Fig. 2A). On the other hand, fungal hyphae proliferated inside and around the stripped seeds. The pathogenic fungal hyphae were arrested at the root side of the intact seeds, whereas the seed coat-stripped seeds were subjected to severe infestation. These results suggest that the B. striata seed coat plays a role in restricting the ingress of fungal hyphae into the seed body, providing a barrier for uncontrolled plant tissue colonization.

Previous morphological studies have shown that the orchid seed coat forms a sac-like structure with a hole on one side and have suggested that the seed coat’s opening is wide enough to allow entry of water and hyphae. Scanning electron microscope revealed a hole at the one end of the seed coat of B. striata seeds, and the gap existed at the root side. Furthermore, we observed fungal hyphae at the hole entrance when B. striata seeds were grown with symbiotic fungus. These results indicate that the seed coat plays an important role in efficiently establishing symbiotic relationships with a small resource of seeds like “dust” by restricting the entry point of fungal hyphae to the root side. In other words, the seed coat acts like a wall protecting a castle (Fig. 2B). This would help to understand the selection mechanism of the right partner among the soil microbiota.