One may rightly think that the development of liquid crystal displays (LCD) has led to a revolution of the market for screens, displays and TVs, and one may wonder if present day displays can still be improved, or if there even is a need to do so. Conventional displays all use nematic liquid crystals, which are anisotropic fluids, showing spontaneous ordering of their molecules’ long axes (Fig. 1(a)). From this orientational order results a wealth of anisotropic physical properties, such as birefringence, and dielectric anisotropy, which are used to modulate light by electric field application to the material in various different geometries, the twisted nematic (TN) state, supertwisted (STN) or in-plane switching (IPS). With the development of thin film transistor (TFT) technology, a lot of the early problems such as non-video rate response times, poor viewing angle, low contrast, have been solved. Todays’ state-of-the-art displays are large, have high resolution, good contrast, excellent viewing angle characteristics and are well suitable for video-rate. 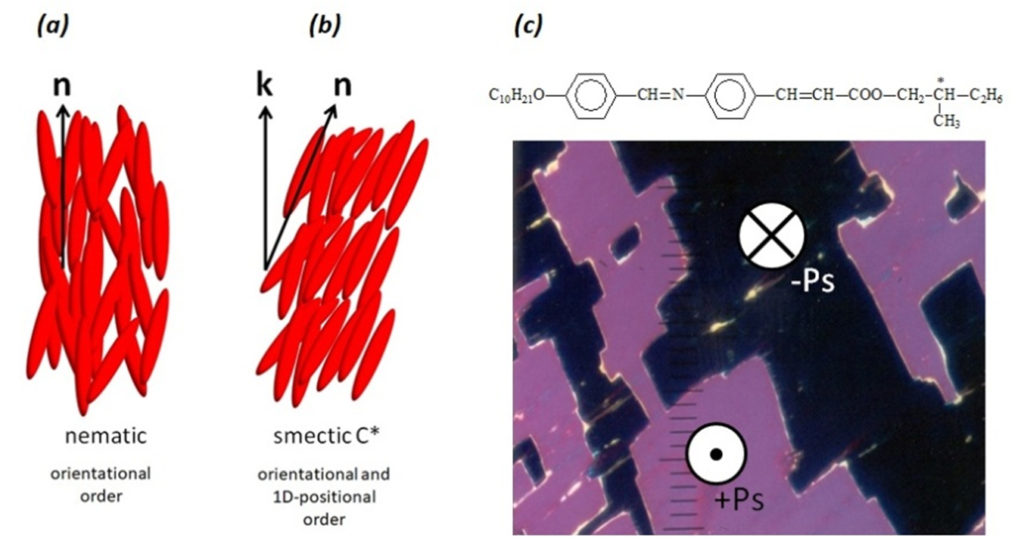 Fig. 1. (a) The nematic phase which constitutes conventional LCDs exhibits only orientational order along the average direction of the long molecular axis and the electro-optic effect is based on an anisotropy of the dielectric constants. (b) The tilted chiral smectic C* phase additionally exhibits a layered structure, and the electro-optic switching results from a coupling of the ferroelectric polarization PS with an applied electric field. (c) Shows the first synthesized FLC, commonly abbreviated as DOBAMBC, and an optical texture that demonstrates the two ferroelectric domains of the virgin FLC.

One could have possibly had this much earlier, by considering ferroelectric liquid crystals. These are chiral materials, which in addition to the orientational order observed for a nematic, also exhibit a one-dimension positional order, thus a layered structure. These are called smectic liquid crystals. If the molecules are tilted with respect to the smectic layer normal, we speak of the SmC* phase (Fig. 1(b)), which shows a spontaneous polarization PS and is ferroelectric, when confined in thin layers between two transparent electrodes. The spontaneous appearance of ferroelectricity in a liquid is remarkable enough (Fig. 1(c)), but these materials also have response times in the microsecond regime, which are about a factor 103 faster than those of nematics. Switching occurs in the plane of the substrate, so there are no viewing angle problems, contrast is brilliant, and the displays are bistable, thus only need to be addressed when information content is changed. 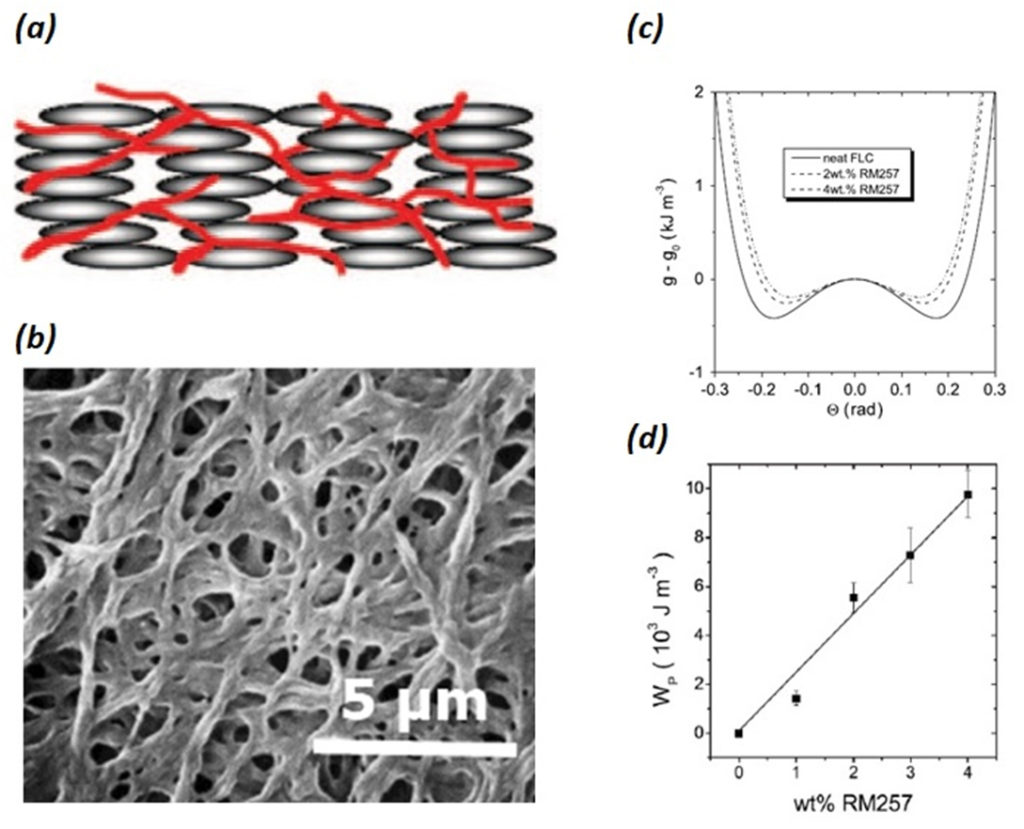 Fig. 2. (a) Schematic of a polymer stabilized liquid crystal, and (b) an electron microscopic picture of the resulting polymer network, which is phase separated and dispersed within the FLC. (c) The effect of the network on the overall free energy density of the FLC is small, which implies that the electro-optic performance is only slightly reduced. (d) The elastic interaction constant between the polymer network and the FLC increases with increasing polymer concentration of the reactive mesogen RM257, as expected.

So why are these displays not available and ferroelectric liquid crystals (FLC) currently restricted to niche markets, like miniature displays in camera viewfinders, high throughput photo-printing machines or fast spatial light modulators? The problem lies in the smectic layer structure, which may cause defects to appear, and generally forbids the self-healing properties of FLC based LCDs, which are common for nematics: when you press (lightly!) on the display, disturbing order and watch images thankfully go back to normal within short times. This does not happen with FLCs and the display would be destroyed. A way to avoid this mechanical instability is to introduce a stabilizing polymer network (Fig. 2(a)), by mixing monomers into an FLC, and inducing photo-polymerization via UV illumination (Fig. 2(b)). The so formed polymer network acts like a template of the liquid crystal phase it was formed in, stabilizes the smectic layer structure, represents a memory state, and can even be used in combination with electrically induced rotational instabilities to obtain well aligned large areas of a ferroelectric liquid crystal. And all this by largely maintaining the superior electro-optic properties of the FLC, such as fast response times, high contrast and excellent viewing angle (Fig. 2(c),(d)). Polymer network – FLC composite materials can easily be engineered such that slight performance losses compared to the neat FLC material are compensated. Obviously, the concept of polymer stabilization can also be expanded onto further innovative liquid crystal phases, such as nematics for THz applications, cholesterics for photonics, antiferroelectric liquid crystals, or frustrated structures like the Blue Phases and Twist Grain Boundary phases.

A Review of Polymer-Stabilized Ferroelectric Liquid Crystals.
Dierking I
Materials (Basel). 2014 May 6