Prosthetic implants are used day-to-day to treat edentulous people and patients in need of skeletal reconstructions. The history of prosthetic dental implants dates back thousands of years, with the early civilizations using seashells and stones to replace missing teeth. However, it is only in 1913 that the modern dental implant technology really started, when Dr EJ Greenfield used an iridio-platinum implant shaped like a cylinder to which a gold crown was attached. Since then, a lot of progress has been made in the field, resulting in the development of implants that can form a strong and enduring bond with bone – a process known as osseointegration. Titanium (Ti) is currently the material of choice in reconstructive dentistry and orthopedics due to its excellent tissue compatibility, good mechanical properties, low cost, and ability to form a stable bond with the surrounding bone following implantation. Yet, post-implantation recovery takes time and failure is frequent in clinical situations characterized by low bone density and/or compromised regenerative potential, and in at-risk patients.

For this reason, intense research efforts are ongoing worldwide to develop better Ti implants that integrate faster and display higher therapeutic potential. Current strategies to make better Ti implants rely on modifications of the implant design, as well as alterations of the implant surface chemistry and topography. Beyond these approaches, researchers have recently tried to make better implants by coating their surface with biologically active molecules such as growth factors and extracellular matrix proteins, with the potential to reduce implant rejection and failure, control healing, and promote integration. However, passive immobilization of biomolecules in their functional form is challenging and cannot reach the level of organization and complexity of the molecular framework typical of the bone tissue. 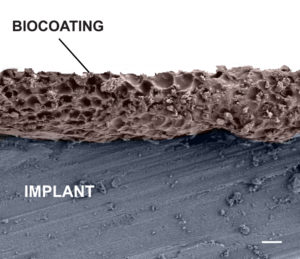 Fig. 2. Side view of a titanium implant coated with a stem cell-engineered matrix (biocoating) as seen under a scanning electron microscope. The micrograph shows an implant decellularized via treatment with freeze/thaw cycles. Scale bar = 5 µm.
Adapted and reprinted by permission from Springer Nature.

Therefore, in this study we have used stem cells to engineer new biological coatings and make better Ti implants. Briefly, human skin cells, which can be isolated from a small biopsy, were reprogrammed to become bone-forming cells and cultured on the surface of Ti implants for two weeks. Then after, to avoid any risk associated with the presence of viable cells, the implants were treated with a solution of detergent in water (0.01% v/v), a solution of alcohol in water (70% v/v), deionized water, or freeze/thaw cycles (-80/37°C) to wash off the cells and expose the matrix produced by the cells in the form of an implant biocoating (Fig. 1). This matrix or ‘biocoating’, which consists of several structural and biologically active molecules organized in physiologically complex patterns (Fig. 2), was found to influence cell behavior in the Petri dish. In a nutshell, the stem cell-engineered matrix was found to promote cell proliferation, affect the expression of genes involved in development, and induce the release of a cell factor recognized to contribute to implant integration following its insertion into a bone cavity.

In conclusion, we have successfully used stem cells to engineer biological coatings with high molecular complexity on the surface of prosthetic implants. The technology creates unprecedented possibilities for development of prosthetic implants that can be personalized, meet the regulatory requirements, and display enhanced therapeutic potential for advanced maxillofacial and orthopedic reconstructions.