Bibliometric analysis of scientific output on influenza in Mexico, 2000-2012

During the spring of 2009, H1N1 influenza became the first pandemic of the 21st century. In the last years, bibliometrics studies have proliferated seeking to provide data on world research. There are no bibliometric studies in Mexico that have analyzed this topic in relation to the generation of Mexican knowledge. The aim of this article is to determine the volume and impact of Mexican scientific output published in journals indexed in Science Citation Index (SCI) on influenza from january 1, 2000, to october 1, 2012. 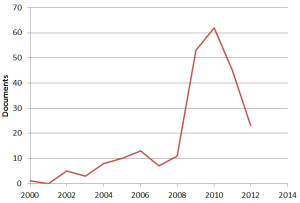 All the documents within SCI whose topic was defined as the main topic over influenza were included; in order to do this, we used the descriptors influenza or swine flu or AH1N1 and Mexico. The analysis included authorship, international collaboration, journals, document type, citations and address of correspondence. SCI was accessed through the Universidad Nacional Autonoma de Mexico (UNAM) with the follow search strategy: Topic=(influenza) AND Address=(mexico) NOT Address=(new mexico), Timespan=2000-01-01 – 2012-10-01. Databases=SCIEXPANDED, SSCI. Lemmatization=On.

All documents indexed in the SCI database were considered.

The scientific output on influenza supposes near 1 % of the total of the medical-scientific production with a decline posterior to the outbreak of 2009 pandemic influenza.