The binding of proteins to different inorganic surfaces plays an important role in natural processes such as the growth of bone tissue (protein-mineral interactions) and in biotechnological and biomedical applications. Recently, the binding of proteins to metal oxide surfaces has received increasing attention due to the important role that this phenomenon plays in determining the biocompatibility of metal oxide materials for use in medicine (Fig. 1). For example, the protein layer deposited on the surface of surgical metal implants can induce early counterproductive immunological responses in patients. The physico-chemical properties of nanoparticles (NPs) can have a dramatic influence on their interaction with proteins and thus their possible future uses. In order to understand this binding fully it is necessary to have a knowledge not only of which proteins are attached to the particles, but also their association and dissociation rates, affinities and the stoichiometries of the complexes. 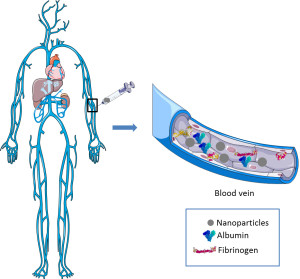 In the present work, the interaction of two human plasma proteins (fibrinogen and albumin) with different metal oxide NPs, namely TiO2, CeO2, Al2O3 and ZnO, was studied by surface plasmon resonance (SPR), a label-free technique used to study interactions between biomolecules in real time. The kinetic binding constants and affinities of the interactions between NPs immobilized on a sensor chip and proteins passed over them as analytes were measured. Five protein concentrations were tested simultaneously for each NP sample immobilized on the sensor chip and running buffer, i.e., phosphate solution (PBS), was injected in the sixth channel to correct for any drift. The NP surface was regenerated with sodium dodecyl sulfate (SDS) and this allowed repeat injections of the protein samples (Fig. 2). Three sensor chips with different chemical surfaces were used to capture the NPs in order to confirm that the interactions are largely independent of the capture chemistry.

The results show that fibrinogen is a high affinity protein and the data fitted well to the simplest model that describes a 1:1 interaction. In contrast, albumin is a low affinity protein and the data fitted better to the conformational change model. Of the metal oxide NPs used in this work, the CeO2 NPs showed a higher affinity than the TiO2 NPs and the Al2O3 NPs had the lowest affinity for the plasma proteins studied. SPR measurements showed that the binding of proteins to these NPs is reversible and the results for the different sensor chips were similar. An assessment of the interaction of proteins with ZnO NPs immobilized on the chip surface failed to provide any results. In spite of the temporarily high levels of NP immobilization achieved, the rapid dissociation of the NPs from the chip prevented the study of this system.

Fig. 2. Workflow for the kinetic analysis of fibrinogen and albumin with immobilized NPs on a sensor chip: (1) The TiO2, CeO2, Al2O3 and ZnO NPs were immobilized in four vertical channels, leaving the fifth as a reference channel; (2) Five different protein concentrations (fibrinogen or albumin) and buffer were injected into the six horizontal or analyte channels and kinetic data were collected; (3) The proteins were stripped from the NPs and SDS was used as a regeneration agent.

The results are consistent with those obtained in previous studies on blood plasma adsorption at surfaces, which showed that initial protein binding was predominantly by albumin, the most abundant protein, and this was replaced over time by fibrinogen, which had a lower concentration but a higher affinity.

We believe that this study highlights the potential of direct metal oxide NP immobilization on chip surfaces for the quantitative assessment of binding with proteins injected as analytes. The characterization of these interactions is important due to the potential of these NPs in biomedical applications. The protein binding on the NP surface has an influence on their bio-distribution and cellular uptake. As a consequence, the characterization of these materials is very relevant when studying the efficacy and toxicology of NPs in the human body.