Bioactive compounds with antioxidant and antimicrobial activity have found applications in a broad range of areas within the pharmaceutical and food industries. As a result, the prospection of new biomass resources to obtain natural extracts with these functional properties is currently a topic of great interest. The application of these extracts within the food industry is aimed at improving the shelf-life, quality and safety of food products. This is achieved by preventing both microbiological processes as well as oxidative processes which have an impact on food quality (promoting, for instance, rancidity). Although plant-based biomass has been typically used for the extraction of natural bioactive compounds, circular economy policies are promoting the utilization of other underexplored resources, such as aquatic waste biomass.

Tab. 1. Total carbohydrate, protein, lipid and phenolic content and antioxidant capacity of the extracts, evaluated by the ABTS and β-carotene bleaching methods. Different letters within the same column denote significant differences between extracts (p ≤ 0.05). (*) TEAC values were calculated after 30 minutes. (†) Calculated for the extracts at a concentration of 0.5 mg/mL.

In this work, we investigated the application of Posidonia oceanica dead leaves as a feasible alternative for the extraction of bioactive compounds. Two alternative and greener methodologies (ultrasound-assisted extraction and hot-water extraction) were followed to produce water-soluble extracts. For each extraction method, two different extracts were obtained according to their ethanol affinity (E1 was ethanol-soluble, while E2 was non-soluble). These extracts were compared with those produced by conventional extraction techniques, such as organic-solvent extractions with toluene:ethanol, applied after ultrasounds and hot-water pre-treatments (coded as E3).

Regarding the composition of the extracts (Tab. 1), the hot-water extracts were richer in carbohydrates, proteins and phenolics, while the ultrasound-assisted extraction seemed to promote the extraction of lipids or ashes. These compositional differences could not be directly correlated with the antioxidant capacity (tested by both ABTS+· and β-carotene bleaching assays) and all the extracts showed a remarkable antioxidant capacity, with TEAC values higher than 200 µmol/g extract and greater than 45% of the β-carotene bleaching inhibition capacity. The balanced composition and the high phenolic content in E2-H2O provided a high antioxidant potential, being this the most promising extract evaluated.

On the other hand, the bioactivity of the extracts was also evaluated by both antiviral and antifungal assays. Although only the E3 extracts showed a significant antiviral activity against murine and feline calicivirus, the E2 extracts were efficient in inhibiting the growth of some fungi with great relevance to the food industry, such as Penicillium digitatum. The E3 extracts also presented remarkable inhibitory activity against Botrytis cinerea, Penicillum italicum and Aspergillus niger (Fig. 1). Surprisingly, those extracts derived from ultrasounds pre-treatment displayed improved bioactivity in comparison to those obtained from the hot-water pre-treatment, despite the lower antioxidant capacity of the former. 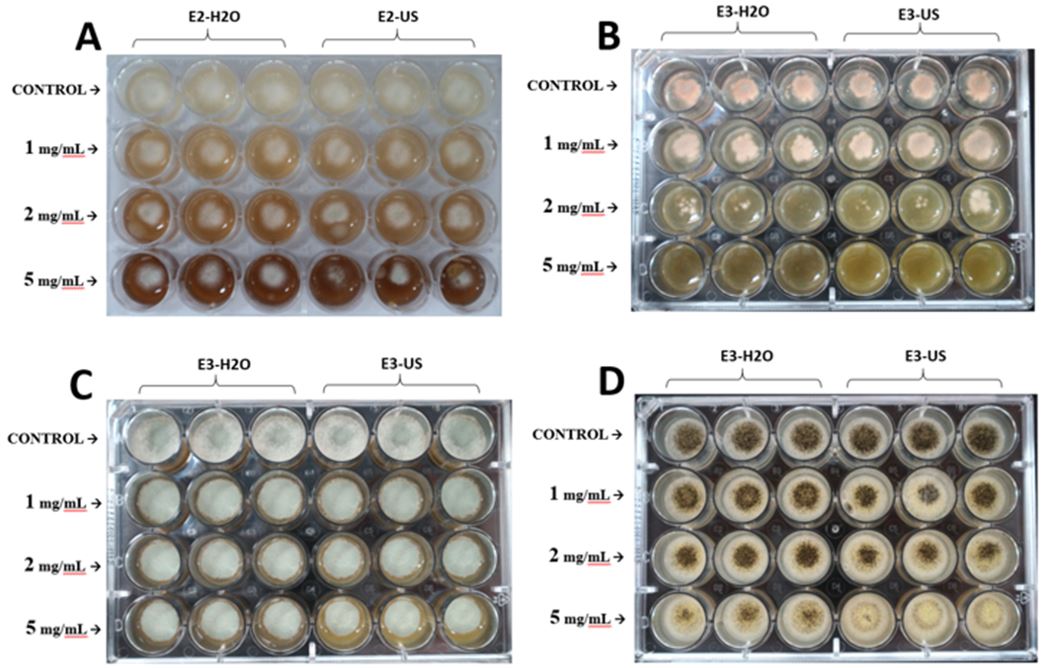