Biodegradable Starch based films with application as alternative packaging

Currently, the largest part of materials used in packaging industries are produced from fossil fuels and are practically non-degradable. These persistent polymers are a significant source of environmental pollution and accumulation of waste, harming wildlife when they are deposited in nature. For example, the time for a plastic bottle to completely degrade is at least 450 years! Within the new framework of “green” tendency, in recent years, current industries have shown an increasing interest in replacing these non-degradable materials by renewable source-based environmental-friendly ones, such as starch, which is the main storage polysaccharide in foods of plant origin. Worldwide starch production is actually estimated at 85 million tons (2015) and global market for starch is projected to exceed 150 million tons by 2020 (GLOBAL INDUSTRY ANALYSTS INC.). Due to its availability, low cost and ability to impart a broad range of functional properties to different kinds of products, starch is used in several industrial applications. However, starch exhibits some disadvantages such as a strong hydrophilic character (water sensitivity) and poor mechanical properties compared to conventional synthetic polymers. In order to improve starch films performance, chemical modification, as crosslink, appear as a common approach. This process uses multifunctional group reagents (crosslinking agents) to react with the hydroxyl groups of starch (responsible for its hydrophilicity), leading to new chemical bonds between molecular starch chains, which improve the mechanical and barrier properties of starch films. Citric acid is a natural organic acid present in citrus fruits, with a suitable structure for its use as crosslink agent. 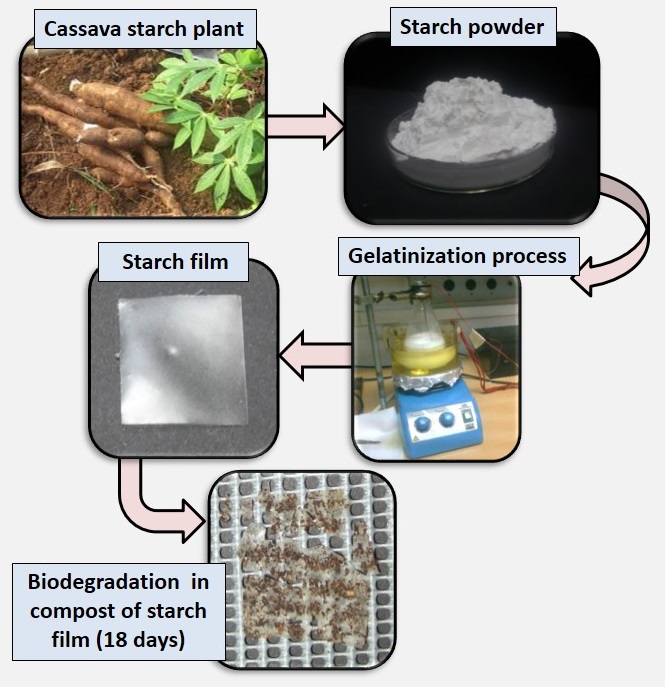 Scheme of the obtaining films and its biodegradability. Starch is extracted from cassava plant and processed to turn it into a powder. Starch films involve gelatinization process and cast in plastic Petri dishes. Finally, films are obtained and biodegradation in compost occurs.

This research is focused on the development of biodegradable starch based films for its application as alternative packaging. Citric acid was used as crosslinking agent and glycerol as plasticizer. Mixture of cassava starch, glycerol, water and citric acid was processed by casting technique to obtain the development materials. The formation of starch edible film involves gelatinization of starch granules by heating in excess water. The heating process was completed at 75 °C in one case and at 85 °C in the other.

Different characterizations were carried out in order to investigate the effect of citric acid and the influence of temperature at which the heating process was completed on the starch films.

The barrier properties of packaging films are highly relevant to ensure a product quality and maximize its useful life. Moisture absorption (MA) indicates the capacity to absorb moisture from the environment in the time and water vapor permeability (WVP) is a measure of the transfer of water vapor through the material. Considering that it is often required that food packaging films limit moisture transfer between the food and the surrounding atmosphere, WVP and MA should be as low as possible. Film with CA processed at 75°C showed an important decrease in both parameters.

Another significant feature is biodegradability of the films. According to ISO (International Standard Organization), biodegradation can be defined as the breakdown in small molecules that are part of the cycle of life (O, CO2, H2O) by the action of naturally occurring microorganisms such as bacteria, fungi, and algae. All the films, buried in vegetable compost, showed significant degradation at 30 days of study. Even though, after 6 days, they changed their tonality and exhibited pores, showing the beginning of degradation. Materials with CA degrade in compost only 6 days after the films without CA.

As a final conclusion, we obtained a biodegradable starch based film with CA processed at 75◦C, which can be a potential alternative to use as packaging replacing the conventional plastics.