Bioinspiration on the lotus leaf surface to develop hydrophobic films

The production and application of synthetic materials in food packaging has grown quickly over the past few decades, resulting in serious environmental concerns due to the resistance to degradation of these synthetic materials. In recent years, the replacement of synthetic plastics by natural polymers in packaging materials has been the subject of intense research. Particularly, natural biobased polymers (mainly polysaccharides and proteins) have received increasing attention for use in food packaging films due to their abundance, biodegradability, biocompatibility, and non-toxicity. 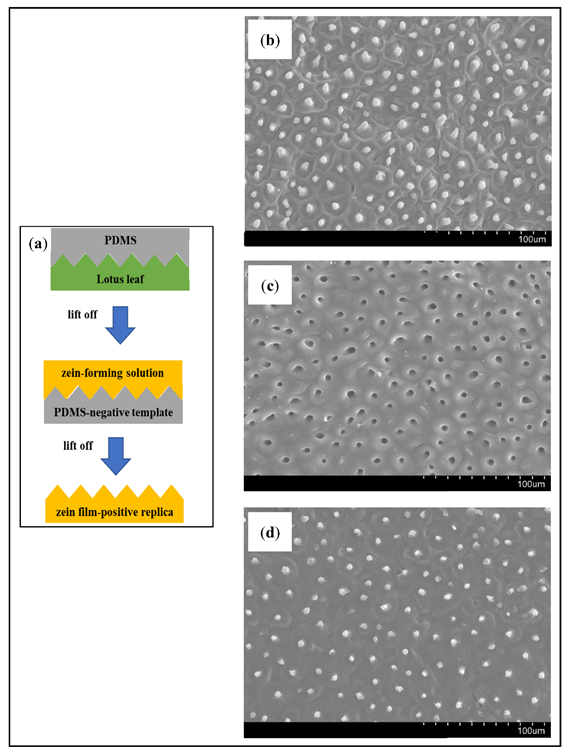 Protein-based films have several advantages over other types of edible materials, namely, they are good gas barriers, possess good mechanical properties, and can also be regarded as nutrients. Zein, a by-product obtained from corn starch processing, is prepared from corn protein flour, and is particularly rich in hydrophobic and neutral amino acids as well as some sulfur-containing amino acids but lacks polar or ionizable amino acids.

Superhydrophobic surfaces are used by several living organisms, both animals and plants. The most famous case from the plant kingdom (Plantae) is the lotus leaf (Nelumbo nucifera). The extreme water repellency of lotus leaves stems from the combination of low surface energy with the hierarchical topology present on the leaf surface. Water droplets roll freely on these surfaces and remove dirt, keeping the leaves clean, even in the muddy waters where these plants tend to grow. This extreme water repellency and self-cleaning performance of the lotus leaf is usually known as the “lotus effect”.

The aim of this work was to develop hydrophobic zein-based films incorporating licorice essential oil (EO) while biomimicking the lotus leaf surface (Fig. 1a).

In this work, a simple and rapid method to mimic the lotus leaf surface was developed and applied to the production of zein-based films. The licorice EO was also incorporated into the films as a bioactive agent. The zein films produced using the lotus negative template presented lotus-leaf-like rugosities, resulting in very hydrophobic surfaces (water contact angle of 112.50°). The zein films with licorice essential oil are biodegradable and possess antioxidant and antibacterial properties against known foodborne pathogens, making them potential alternatives to the conventional plastics used in food packaging solutions, reducing environmental pollution, and increasing the shelf-life of foods.