Brewster angle microscopy (BAM) is an imaging technique that allows for the visualization of the film architecture of monolayers without the use of exogenous dyes. This is a relatively new system that was developed independently and concurrently by two research groups in 1991. The working principle behind BAM is as follows; plane polarized light is directed onto the interface between air and liquid at the Brewster angle. When water is used as the liquid, the Brewster angle is ~53° and no light is reflected. However, when a film is present at the interface between air and water, the change in refractive index will cause light reflection. This light is captured by a camera and a grayscale image is generated (Fig. 1). From the beginning, this technique has generated a lot of attention and was applied in many different fields. 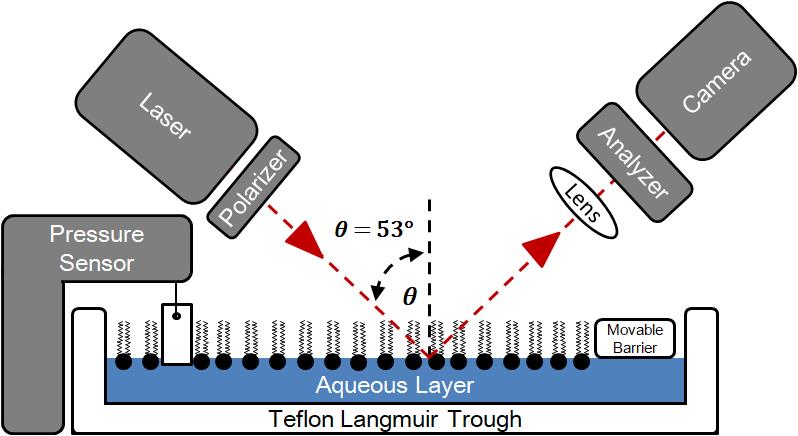 In this review paper, an extensive literature search into the various biological applications of BAM are presented. These include studies on lipid/amphiphilic molecules, proteins, biological extracts, DNA and nanoparticles at the air water interface. With the aid of BAM, scientists were able to visually identify whether minor changes to the lipid composition altered the lateral organization of the monolayer. In some of the studies reviewed, the effect of changing lipid components were investigated. Such differences include the overall charge, acyl chain saturation/unsaturation or the headgroup size. Results show that even minor changes in lipid structure can affect the lateral organization. One of the studies reviewed identified the importance of the acyl chain length of ceramide lipids. Their results show observable differences in monolayer organization between short and long chains. Ceramides with long chains of 14 or 16 carbons did not form domains during compression, but domains were observed with shorter chains. Furthermore, hydroxylation of ceramides resulted in observable differences in monolayer organization. Another study addressed the effect of fatty acid unsaturation on monolayer characteristics. The conformation of unsaturation such as cis or trans induced observable differences in domain morphology of fatty acids of the same length. These results aid scientists in further characterizing the roles of individual lipids in a membrane that may impact potential downstream effects such as signaling.

BAM is also useful for studying enzyme activity. In this review, we summarize studies that were able to visualize the enzymatic activity of various proteins. For example, the lipid hydrolysis activity of phospholipase enzymes can be visualized with BAM, which helps gain a better insight into enzyme mode of action. Furthermore, in Figure 2 – Panel A, complex lipid extracts such as those from yeast cells were studied to assess the effect of the anti-cancer drug edelfosine. Results showed that edelfosine reduced the size and frequency of lipid domains.

Fig. 2. Brewster angle microscopy image of; Panel A) yeast extracts before and after treatment with cancer drug edelfosine. 3D images of the monolayers are shown on the right of each image. Panel B) lung surfactant model system before and after addition of gelatine nanoparticles including. 3D images on the right of the monolayer (unpublished images).

As nanoscience and nanotechnology expand across all scientific disciplines, the need increases to study the toxic effects associated with their use, especially those designed for drug delivery. Some studies that looked into the toxicology of nanoparticles are reviewed in this paper. As shown in Figure 2 – Panel B, the presence of gelatine nanoparticles caused a significant change in the lateral organization of lung surfactant model system that  are not easily monitored in real time. There was a significant decrease in domain size after nanoparticle addition.

To conclude, BAM is an optical microscopy technique that has advanced the scientific field with its potential to visualize monolayers at an interface in real time and under full hydration. Moreover, the architecture of the films can be assessed upon changing the subphase composition, in terms of ions, pH or the additions of proteins or nanoparticles.