Yellow-cedar trees, also known as Callitropsis nootkatensis, can live for hundreds of years because they have has few insect or pathogen pests. Periodic studies over the last century have examined extractable chemicals in their tissues and discovered numerous compounds, especially in stem heartwood, with strong activities towards a variety of organisms. Some species sensitive to these chemicals can adversely impact the health of important agricultural plants, animals, and even humans.  Yellow-cedar is a prevalent evergreen conifer in coastal forests of southeast Alaska, western Canada, and inland forests along the Washington and Oregon Cascades to northern California, USA. Most of the active compounds belong to the terpenoid class of chemicals produced by many plants.  Terpenoids are divided into groups based on their number of carbon atoms, monoterpenes have 10 carbons, sesquiterpenes 15 carbons, and diterpenes have 20.  Within these groups, compounds containing only carbon and hydrogen atoms are called hydrocarbons, and those with one or more oxygen atoms are referred to as oxygenated. 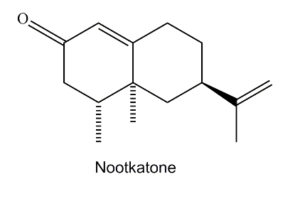 Yellow-cedar foliage stores primarily monoterpene hydrocarbons, while the most abundant compounds in stem heartwood are a mix of oxygenated monoterpenes, oxygenated sesquiterpenes, and another group of oxygenated compounds called tropolones, with an uncommon seven carbon ring. Oxygenated diterpenes are stored mainly in yellow-cedar bark, with some also in foliage.  Intact yellow-cedar tissues, essential oils, solvent extracts, or individual compounds isolated from its tissues can inhibit growth or kill fungi and their spores, molds, and bacteria. They also repel or kill various animal pests, and have a general toxicity toward cellular cytoplasm, including some human cancer cells. Many arthropods such as ticks, fleas, termites, ants, mosquitoes are sensitive to these compounds.  Monoterpenes in the foliage may also influence deer browsing.  Yellow-cedar’s ability to live for hundreds of years is derived, in part, from the complex mixtures of biologically active compounds protecting their tissues against decay fungi and other pests in their native environments.  Heartwood chemicals remain active after the trees die and protect standing snags from decay, allowing them stay upright for 80 to 100 years after death.

Nootkatone (Fig. 1), is one of the most active oxygenated sesquiterpenes in yellow-cedar heartwood. After initial isolation from this tree, it was found at low concentrations in oils from grapefruit and several other citrus fruits.  Its characteristic grapefruit odor, detectable by humans at low concentrations, gives it value for flavoring beverages, foods, and fragrances. Nootkatone’ s toxicity and repellent activity toward arthropods has stimulated its development into potential commercial products for protecting humans and animals from ticks, mosquitoes and possibly other arthropods that transport disease causing organisms. While nootkatone can be synthesized from more abundant compounds obtained as by-products of the citrus industry, this source is not recognized as “natural.” There is demand for an abundant, lower cost source of “natural” nootkatone for use in the food, fragrance, cosmetic, pharmaceutical, and possibly biopesticide industries.  This has driven research toward trying to produce it with biological based processes using enzymes, or microbe fermentation, because large sustainable supplies from plant sources such as yellow-cedar have limitations.