Pancreatic ductal adenocarcinoma (PDAC), the most prevalent type of pancreatic cancer, is the fourth leading cause of cancer-related deaths in the USA. Most of the PDAC patients are diagnosed at an advanced stage of disease and their tumors are not surgically resectable, contributing to an overall 5-year survival rate of 7%. The lack of early diagnostics has made it challenging to develop therapeutics to slow or reverse PDAC. Most biomarkers were discovered in advanced PDAC or cell lines that are not representative of earlier stages, when detection would be most relevant. Thus, we reasoned that proteins released from progressing PDAC precursors might provide an opportunity for discovering diagnostic markers for PDAC. 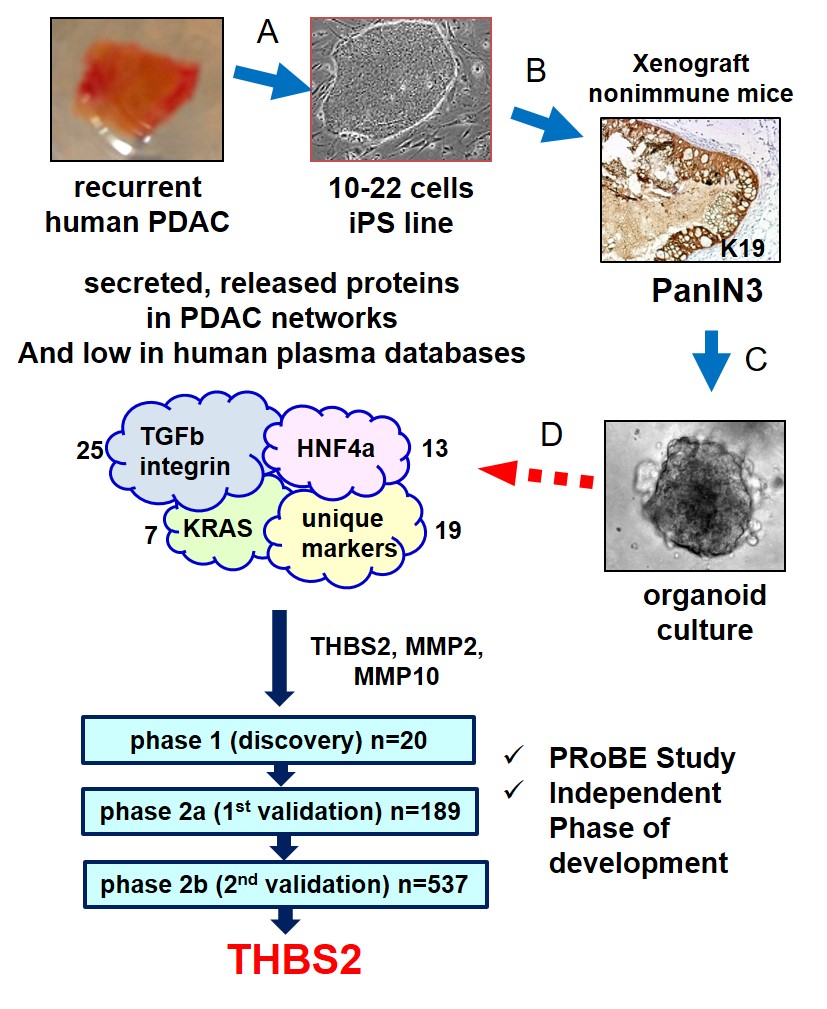 Fig. 1. Scheme for A) generating 10-22 iPS line from human PDAC, B) re-differentiating the cells to the PanIN3 stage, C) organoid culture, and D) Proteomic analysis of secreted and released proteins, and curation that are poorly expressed in human plasma proteome database. Networks for the human proteins are shown, along with the number of proteins in each network (Note: the secreted proteins were further narrowed down to 64 low abundant proteins). THBS2, in the TGFβ/Integrin network, is emerged as a promising biomarker in three independent tests of human plasma.

We employed a reprogramming technology to create an induced pluripotent stem cell (iPSC)-like line from an advanced, recurrent human PDAC1 tumor.  The iPS-like cell line (designated “10-22” cells) contains common PDAC mutations such as an activating KRAS mutation, a CDKN2A heterozygous deletion, decreased PTEN and DPC4, and 20 of the 23 chromosomal rearrangements of the original tumor epithelial population. The 10-22 cells can be propagated indefinitely yet preferentially generate PDAC precursor ductal lesions after growing for 3 months in immunodeficient mice. The lesions progress to the invasive stage by 6-9 months.

We  isolated  precursor lesions from the immune-compromised mice transplanted with the 10-22 cells, and cultured the lesions as 3D organoids in serum-free media (Fig. 1). Proteomic analysis of the filtered media derived from 10-22-derived PDAC precursors identified 107 human proteins specific to the PDAC precursors, in comparison to control growth conditions. Of these proteins, seven fell into a network for RAS/p53/Jun/CTNB1, and 43 fell into interconnected TGFβ and integrin networks, which had been previously reported in PDAC progression. Another 25 proteins were within a network for the transcription factor HNF4α. HNF4α was not expressed in pancreatic duct or acini, but we found it to be up-regulated in various human and mouse PanIN2, PanIN3, and well-differentiated PDAC, but not in poorly differentiated PDAC. Thus, the 10-22 iPS system allowed the discovery of a new gene network specific to the early to intermediate stages of PDAC that is conserved between humans and mouse. Consequently, our unique ability to reproducibly generate live human PanIN stage lesions in non-immune mice has provided a new resource for discovering secreted proteins that can be used as candidate biomarkers (Fig. 1).

We assessed the utility of the biomaker candidates by collaborating with Dr. Gloria Petersen at the Mayo Clinic, MN to screen human plasma samples from healthy subjects and from patients with various stages of PDAC, chronic pancreatitis, diabetes, and intraductal papillary mucinous neoplasm. We employed a Prospective Specimen Collection Retrospective Blinded Evaluation (PRoBE) methodology, developed for NCI’s Early Detection Research Network, in three independent phase validation studies. We revealed that elevated concentration of plasma thrombospondin-2 (THBS2) detected PDAC consistently. The receiver operating characteristic (ROC) c-statistic was 0.76 in the phase 1 study (n=20), 0.84 in the phase 2a study (n=189), and 0.87 in the phase 2b study (n=537). The plasma concentration of THBS2 was able to classify resectable stage I cancer as readily as stage III/IV PDAC tumors. THBS2 plasma concentrations combined with those for CA19-9, a previously identified PDAC maintenance marker, yielded a c-statistic of 0.96 in the phase 2a study and 0.97 in the phase 2b study. THBS2 data improved the ability of CA19-9 to distinguish PDAC from pancreatitis. With a specificity of 98%, the combination of THBS2 and CA19-9 yielded a sensitivity of 87% for PDAC in the phase 2b study. Thus, we proposed a THBS2 and CA19-9 blood marker panel to detect PDAC in patients at high risk for PDAC.