Biomimetic approach for an artificial nose

The dream of monitoring odours is certainly very old, but only recently scientists have come-up with realistic approaches and proposals. As soon as the olfactory system started to reveal its secrets and the specific sensing elements (the olfactory receptors) were identified (Buck and Axel, Cell 1991), biologists and engineers started building artificial models of the human nose, using a bio-inspired strategy. This means that we get inspiration from Nature on the basic principles regulating the perception of odours, but not necessarily adopting the same tools. In fact, biology uses proteins whenever chemical specificity is required, as in the detection and discrimination of thousands of different odours. But it is common knowledge that proteins are too delicate and unstable to be used in an electronic device… or are they? It depends on the protein. The wool and the silk of our clothes are proteins, as are the seeds that can survive for long periods in dry and hot conditions, or those of our skin and hair.

Fig. 1. Substitution of Isoleucine 100 in a pig odorant-binding protein (OBP) abolishes discrimination between the two enantiomers of carvone. Such studies help to understand the requirements for a specific fitting of a ligand to an OBP and suggest how to engineer these proteins to be used in selective biosensors for odours (Zaremska et al., 2020).

Olfactory receptors, which are membrane-bound proteins, certainly do not belong to such categories, but there is another class of small proteins mediating smell in vertebrates, insects and other organisms, that prove to be quite interesting. They act as carriers of odorants in the nose of vertebrates and in the antennae of insects (Pelosi, Crit Rev Biochem Mol Biol. 1994, Pelosi et al., Biol Rev Camb Philos Soc.  2018,), and therefore are named odorant-binding proteins (OBPs). The exceptional properties of these proteins have allowed a step forward in the design of an artificial nose by taking a biomimetic approach. This means that, besides being inspired by the olfactory code, we can actually mimic Nature by using the same tools of the physiological systems. OBPs present a good specificity towards different odorants and are also endowed with unique advantages to be adopted as detecting elements in an artificial system. In fact:

This last characteristic comes useful to produce specific sensors narrowly tuned to selected odorants. An example of how such approach can be used to radically change the binding characteristics of an OBP (Fig. 1) is provided by one of our recent works, where we managed to abolish the chiral discrimination of the pigOBP1 towards carvone by replacing two isoleucine residues with leucines (Zaremska et al., Chemistry. 2020). Works of this type are feasible thanks to the large amount of structural information available on OBPs of insects and vertebrates. It is even conceivable in a relatively near future to design and fabricate artificial proteins with desired binding activity, where only the essential core is retained, and increased stability to environmental conditions. 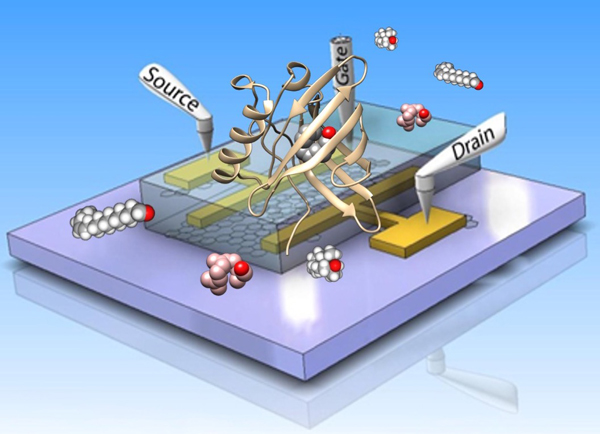 Fig. 2. Field-effect transistors can be functionalised with odorant-binding proteins (OBPs) immobilised on a gold or a graphene surface. Upon binding a volatile compounds, like an odorants, a change in the electric properties of the transistor can be measured. Arrays of such devices, each functionalised with a different OBP, can represent the basis of an instrument for odour detection and discrimination (Larisika et al., 2015; Mulla et al., 2015).

Therefore, OBPs are ideal elements to differentially bind different odorants in challenging environmental conditions. But such binding and recognition events need to be converted into electric signals in order to be amplified, processed and compared. It has been recently shown that OBPs, when immobilised on graphene (Larisika et al., Angew Chem Int Ed Engl. 2015) or on gold (Mulla et al., 2014, Nat Commun. 2015) respond to volatile compounds with electric signals (Fig. 2). Arrays of such elemental sensors could be used to discriminate individual odours and even complex mixtures.