The polylactic acid (PLA) family of polymers are made from plant-based oils and so are carbon-neutral; any carbon that they contribute to the environment has been extracted from the atmosphere by the growing plant. They can be degraded by the action of water or bacteria, and disposed of by composting. This makes them attractive for packaging or disposable drinks containers. Their degradability also opens up the more sophisticated application area of biomedical devices. Implanted devices, such as steel plates used to repair bone fractures, are only required to function for a limited time. Afterwards, say on healing of the fracture, they may be removed in a planned operation or when they cause discomfort. A PLA implant will degrade (in medical terms, be bioresorbed) so that a second operation will not be required. This may be viewed as a ‘smart’ material characteristic.

Another smart property of PLA is shape memory. When solid polymer is heated so that it can be easily deformed into a new shape (in an amorphous polymer, beyond its glass transition) and then cooled, it will retain the new shape. On reheating, it returns to its original ‘remembered’ shape. Some medical devices exploit shape memory, triggering recovery by electrical heating or body heat. For example, in fracture repair, devices which have been stretched can be implanted so that, on heating, they shrink and pull fracture surfaces together to hasten healing. For this reason, we studied strain recovery behaviour of a PLA material and created a mathematical model of its memory recovery with time. Quantitative understanding of this nature is intended to help designers of polymer shape memory devices.

We chose as a test material a copolymer of L-lactide and DL-Lactide in a 70:30 molar ratio. This gives low crystallinity and a relatively high bioresorption, at a level suitable for implantation. Hollow tubes of it were stretched along their axes to double their lengths (i.e. a strain of 1.0) and create a temporary shape. A tensile testing machine, incorporating an oven at 60°C was used for this purpose; the temperature is close to the material’s glass transition. We observed stress-strain behaviour at various stretching speeds to gain an overall understanding of the material. Also, strain recovery experiments were performed in which the specimens were released and allowed to shrink back immediately on achieving maximum stretch; the recovery data was gathered using video capture. This is essentially measuring shape memory.

With the material containing 13% rigid crystals, it may be envisaged as a soft matrix containing stiff crystalline inclusions, with the matrix providing the shape recovery. We explored the effect of crystals on the mechanical behaviour of the material using established composite theory and also using finite element modelling. An ensemble of finite element models was generated statistically, an example of which is shown in Figure 1. The elastic properties of PLA crystals were obtained from X-ray measurements of strained PLA gathered from the literature, while the matrix was assumed to be elastic-plastic. The crystals were shown to affect the stiffness and yield strength of the material and the modelling enabled us to isolate the properties of the amorphous phase. 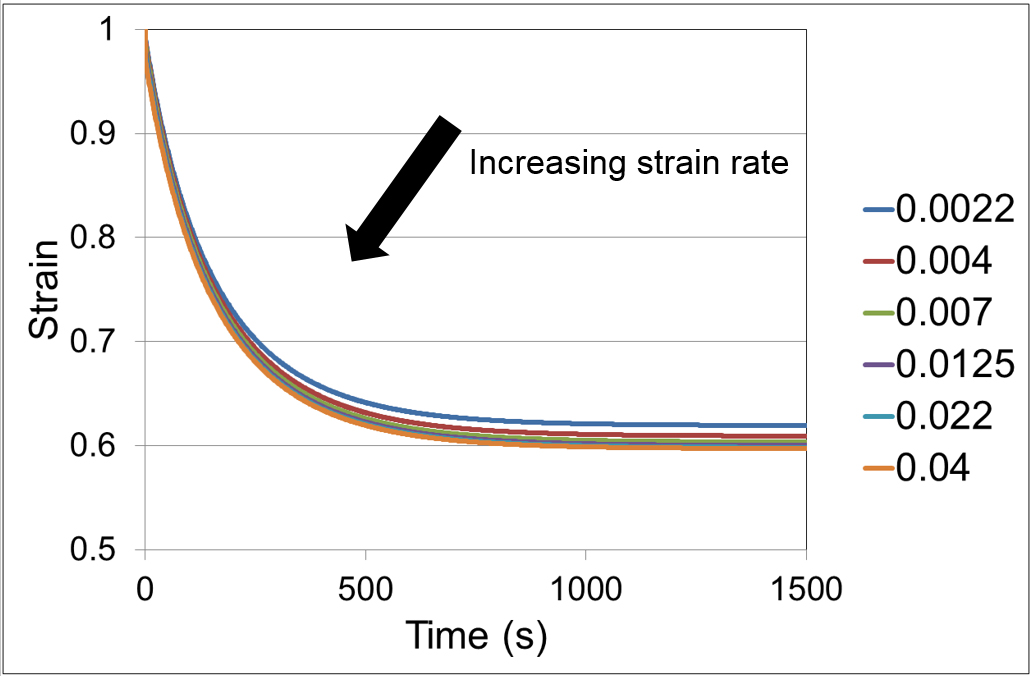 Fig. 2. Model predictions of strain recovery after stretching to a strain of 1. Caption shows rates of strain of initial stretch in inverse seconds.

We created a mathematical model of the amorphous phase that included viscoelastic effects such as increasing yield stress with stretching speed and the decay in stress at constant strain. This enabled us to produce predictions of the recovery strain with time, shown in figure 2 for various stretching speeds. These were directly compared with the strain recovery experiments and the model was shown to be effective. A practically effective model of shape memory in PLA has been developed.