Bufadienolides are a family of cardiac aglycone compounds with the inhibitory activity of Na+/K+-ATPase. They exist extensively in both animal and plant species, such as Crassulaceae, Ranunculaceae, Bufonidae and Colubridae families. In traditional Chinese medicine, bufadienolides are the main anti-cancer activity components of ChanSu (Venenum Bufonis) and cinobufacini injection, which are wildly used clinically for the treatment of different types of cancer including liver cancer, lung cancer and stomach cancer. However, the metabolism status of bufadienolides was still unclear. 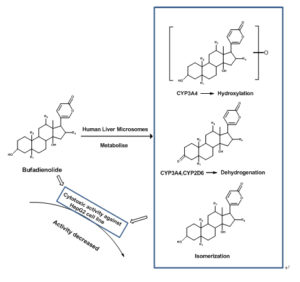 The metabolism of bufadienolides in HLMs and their cytotoxic activity variation in HepG2 cell.

As we all know, liver is the main metabolic organ of the human body. The cytochrome P450s-rich liver microsome is the most important drug metabolic enzyme in the endoplasmic reticulum of the liver cells. According to the previous metabolic studies of bufadienolides, we knew that the metabolism reactions of bufadienolides in vivo were mainly phase I metabolism reactions (oxidation-reduction reactions). In the present study, human liver microsomes (HLMs) were selected for the in vitro metabolic model. We added an NADPH-generating system (NADP, glucose 6-phosphate, glucose-6-phosphate dehydrogenase and MgCl2) to conduct the phase I metabolism reactions. As the amount of metabolites was too little, high-resolution tandem mass spectrometry was applied for the metabolites analyses. Based on the systematic MS/MS dissociation analysis of bufadienolide standards, the structures of metabolites were deduced and identified. Further, in order to clarify the metabolic mechanisms, a study of humanized recombinant enzyme was carried out.

Based on the aforementioned results, we wanted to know whether and how the anti-tumor activities of bufadienolides changed after HLMs biotransformation. So we selected 5 representative bufadienolides with higher metabolic rates and stronger anti-tumor effects to compare their activities alteration before and after incubation. HepG2 cell line was chosen for its high sensitivity according to our previous experiments. Solid phase extraction method was used for the enrichment of metabolites. The incubation system without substrate was set as blank control. The anti-cancer effects of these 5 bufadienolides before and after incubation against HepG2 cell line were tested.

Through the comparation of 50% inhibition concentration values before and after incubation, we found that although the anti-tumor effects of bufadienolides were decreased in different degrees after incubation, the cell killing activities of them were still strong. This suggested that the metabolites still possess cytotoxic activity, and they should be monitored simultaneously in the clinical pharmacokinetic study of bufadienolides.