Propionibacterium acnes is an anaerobic Gram-positive bacteria member of the usual skin microbiota. This bacterium is able to growth in the sebaceous gland and in the hair follicles where the sebum provide anaerobic environment and nutrients. In these conditions, the bacteria produce an infection and inflammation due to immune system response, usually known as acne. This infection is universally extended between young people (85% of teenagers). Besides, an increasing number of studies have implicated P. acnes as opportunistic pathogen, frequently isolated from blood, skin and soft tissues, in biofilm-associated infections of medical devices (prosthesis contamination and serious infections  as endocarditis, osteoarthritis, endophthalmitis or sarcoidosis) and even in metastasis of the prostate gland correlated to neurodegenerative disorders. 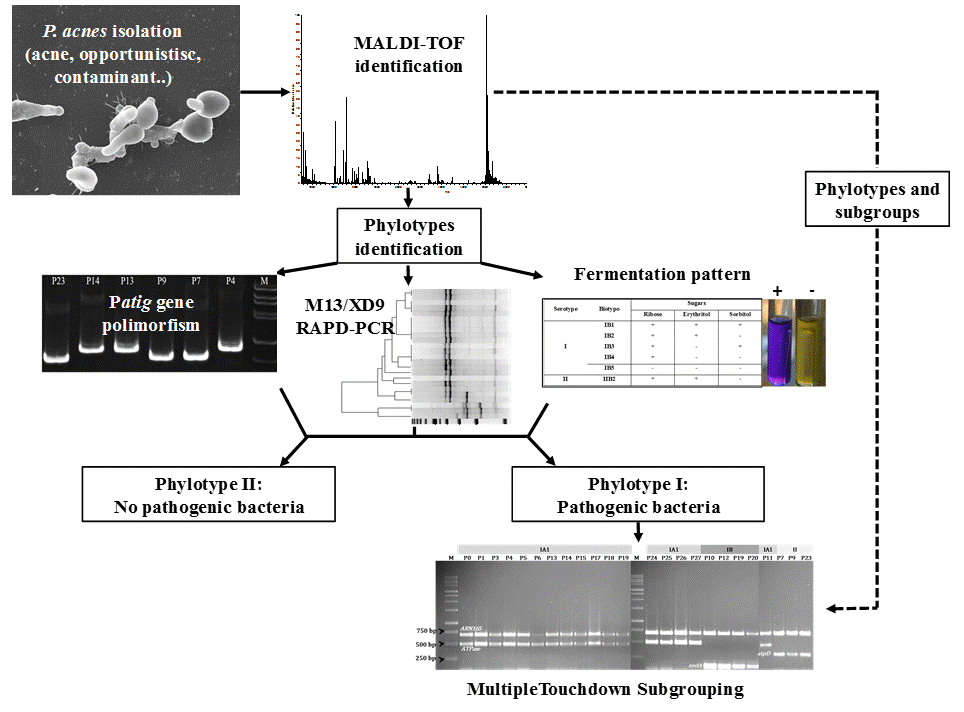 The increasing number of resistance to antibiotics and the difficulty of treatments makes important to its characterization from a molecular point of view, what type of strain is being fought. In this sense, current studies  to identify differences in the pathogenic potential of P. acnes have allowed to know the existence of diverse subpopulations  associated to health and/or diseases.  Actually is accepted  that P. acnes  could be classified into three major genetic divisions (I, II, and the filamentous type III). Besides, group I was further separated into different subdivisions (IA1, IA2, IB, and IC). Moreover, the phylotypes had been recently recognized as subspecies, based on their intraspecies heterogeneity. This has resulted in the proposal of designing phylotypes I/II such as P. acnes subsp. acnes subsp. nov., and phylotype III as P. acnes subsp. elongatum subsp. nov. There is growing evidence, although not a full agreement, about their associations with specific infections (potential production of putative virulence factors, inflammation, biochemical, aggregative, and morphological characteristics) or being compatible with health. Therefore, phylogroups IA1 and IC are commonly associated with acne, while IA2, II, and III are associated mainly with infections of the prosthetic joint, spinal disc, macular hypomelanosis, and other tissue. Moreover, some subgroups of phylotypes II and III associated with healthy skin, have even been proposed as a topical probiotic for treating acne.

The classification by classical methods is tedious and slow and require the isolation of the strain, something that can be difficult due to the requirement culture conditions. The aim of this work was to validate a less labor-intensive and inexpensive methods for an accurate P. acne typing, investigating the pathogenic potential of 24 clinical isolates from a patient population. Thus, we have identified as P. acnes by MALDI-TOF different types of propionibacteria  with disease/health. In addition we have examined the correlation between the clusters deduced from several RAPDs, the polymorphism of PAtig gene, the existing biotypes established according to the pattern of sugar fermentations , and the phylogroups recognized by multiplex touchdown analysis. Overall our results show the importance of applying different methods to distinguish some features of P. acnes subpopulations with different pathogenic potential, and to understand the role of different types in the pathogenesis of this bacterium. The differences found in these analyses demonstrate that subgroups within a phylotype are genetically distinct, and it is desirable to have a rapid typing scheme capable of distinguishing them. In this sense, although all methods worked satisfactorily, the differences in the polymorphism of the PAtig gene in combination with the pattern of the multiplex touchdown assay, could be considered as the most appropriate molecular typing schemes, because they are fast and economical typing methods with discriminatory capacities. Unfortunately, no clear relation between resistance to antibiotics and the subgroups profiles established could be observed, so antibiotics resistant profiles are also important for the treatments.