Recent evidence challenges the longstanding view that light-to-moderate alcohol drinking might confer cardioprotection, and the latter is mostly based on population studies in men or in male experimental animals. However, while the reduction in blood pressure caused by moderate alcohol consumption in young, but not in older women might be considered favorable outcome. Our findings showed that such effect is caused by estrogen dependent reduction in heart function. 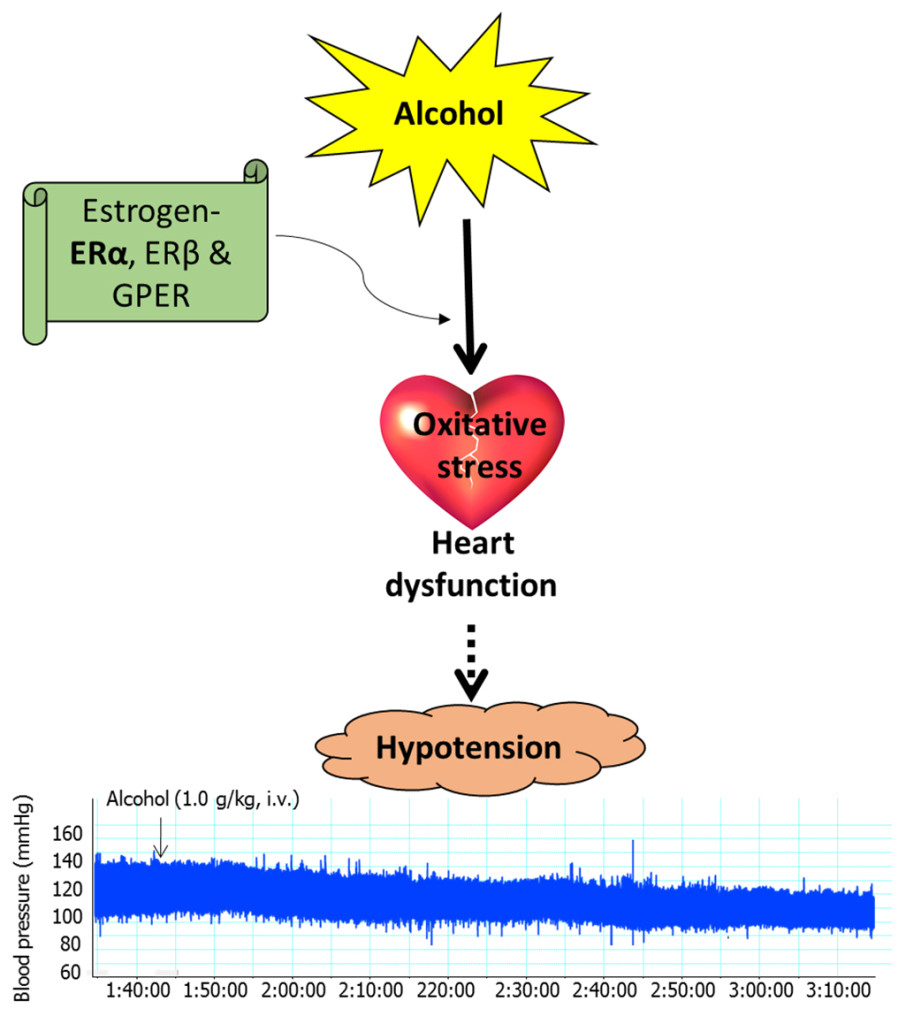 We showed that acute moderate alcohol dose (1.0 g/kg) administered over 30 min had no effect on cardiac function or blood pressure in conscious male rats or estrogen-depleted (ovariectomized) female rats. By contrast, during the estrous cycle phase characterized by the highest circulating estrogen level or in ovariectomized rats that received acute or chronic estrogen replacement, the same dose of alcohol produced substantial reduction in heart function and blood pressure. These findings were further corroborated by the ability of the same dose of alcohol to suppress cardiac function (left ventricular developed pressure) and blood pressure in male rats pretreated with estrogen. Blood alcohol levels (81 to 96 mg/dL) were similar in all animal preparations. Collectively, our findings strongly implicated estrogen in the deleterious cardiovascular effects of alcohol in female rats.

To understand the mechanism of these sex (estrogen)-dependent deleterious cardiac effects of alcohol, we measured biochemical responses in the hearts of rats that received estrogen and alcohol compared to alcohol only. We showed that combining estrogen and alcohol caused oxidative stress, a condition known to suppress cardiac function due, at least partly, to the inability of myocardial enzymes to detoxify alcohol metabolites and other cardiotoxic byproducts formed in presence of alcohol. We focused on catalase and aldehyde dehydrogenase (ALDH2) because these two myocardial enzymes suppress oxidative stress and are both activated by estrogen. Interestingly, the higher activity of these two enzymes in the presence of endogenous or exogenous estrogen is counterintuitive for two reasons. First, a higher catalase activity increases alcohol metabolism to its cardiotoxic metabolite acetaldehyde, which overwhelms the antioxidant capacity of cardiac enzymes. Second, ethanol-evoked activation of ALDH2 is somewhat limited because it starts from a higher basal level in the presence of estrogen. While these findings offered estrogen-dependent cellular mechanisms for the enhanced cardiotoxic effects of alcohol in female rats, it was important to identify the estrogen receptor subtype implicated in these deleterious effects of alcohol.

Our preclinical studies in rat models firmly support the clinical reports on alcohol-evoked hypotension in young women. We extended these findings to show that such alcohol-evoked reduction in blood pressure is mediated by E2-dependent reduction in heart function. We demonstrated a key role of oxidative stress in this phenomenon and its dependence, for the most part, on ERα signaling. The findings highlight ERα blockers as potential therapeutics for mitigating alcohol-induced cardiovascular anomalies in young women.