Millions of neurons are generated during fetal development from progenitor cells that reside inside the embryonic brain. These neural progenitor cell (NPC)s divide many times to generate new neurons in a process termed ‘neurogenesis’. At each cell division, NPCs have to decide whether to duplicate themselves to expand the progenitor pool, or to instead differentiate into progeny that can integrate into the neural networks that support brain function. The decision between proliferation and differentiation is controlled by a combination of NPC-intrinsic signals and extrinsic signals originating in the surrounding tissue, which forms a regulatory ‘niche’. 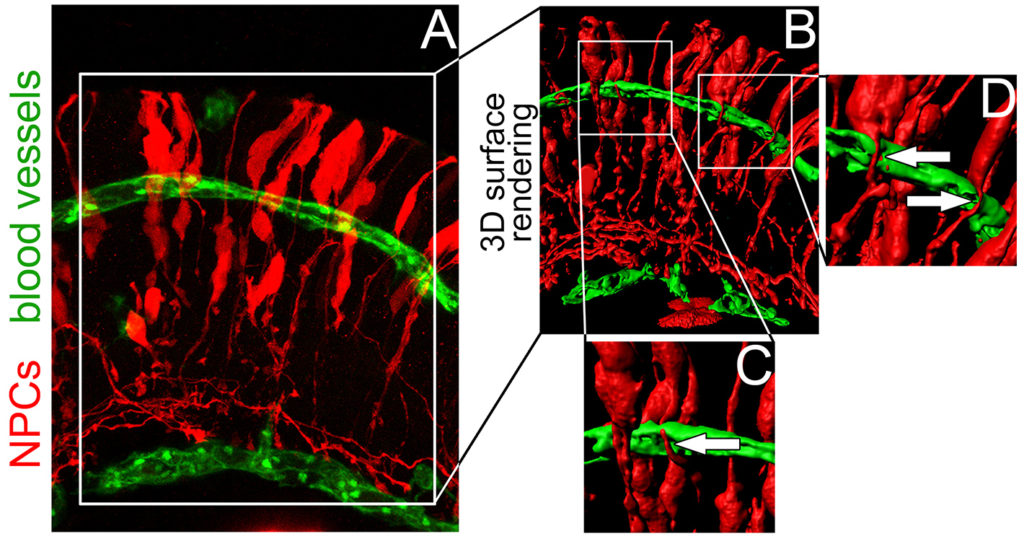 Fig. 1. Neural progenitor cells contact blood vessels in the embryonic brain. A section of mouse embryonic hindbrain tissue was labelled fluorescently with markers for neural progenitor cells (NPCs) and blood vessels and an image acquired with a confocal microscope (A) before converting the image with digital software to obtain a 3-dimension reconstruction (B). The boxed areas in (B) are shown at higher magnification in (C) and (D) to illustrate contact points between NPC processes and a blood vessel (indicated by arrows).

The research laboratory of Christiana Ruhrberg at University College London (UCL) in the UK investigated whether blood vessels contribute to brain development beyond their classical role in oxygenating and nourishing neural tissue by regulating the behaviour of NPCs. To address this question, they utilised the mouse embryo hindbrain as a model system in a study led by researcher Mathew Tata. They chose this model because it possesses unique advantages over studying neurogenesis in other brain regions, including the ability to image NPCs and their vascular supply in an “open book” preparation. Ruhrberg’s team was able to observe the pattern of neurogenesis across this entire organ at different stages in development whilst simultaneously following the progression of angiogenesis, the process by which blood vessels sprout from pre-existing ones to expand the vascular network.

Ruhrberg’s team found that the peak of NPC division immediately followed a surge in angiogenesis and subsided after vessel sprouts had fused into a vascular network. They then teamed up with Nicoletta Kessaris at UCL to image single, fluorescently labelled NPCs to show that they reside close to, and even intimately contact hindbrain blood vessels. Ruhrberg’s team next quantified NPC mitotic activity in hindbrains that lack blood vessels in the neurogenic zones. For these experiments, they analysed the hindbrains of mouse embryos lacking the transmembrane protein NRP1 either ubiquitously or in blood vessels. They found that NPCs initially proliferated faster, but then underwent a sudden loss in proliferative capacity when blood vessel growth was impaired. In contrast, NPCs showed normal mitotic behaviour in hindbrains lacking NRP1 only in neural cells, excluding that NRP1 served as a receptor for growth-regulatory signals on the NPCs themselves.

To determine the fate of dividing NPCs in hindbrains lacking neurogenic zone vasculature, Ruhrberg’s team exposed NPCs in utero to the thymidine analogue BrdU, which incorporates into cycling cells during S-phase, and 24 hours later determined the proportion of BrdU-labelled cells that also expressed the Ki67 marker of cycling cells. This strategy allowed them to define which fraction of cells that had incorporated BrdU 24 hours earlier had re-entered the cell cycle and had therefore undergone self-renewing divisions. Their quantification revealed that both full and vascular Nrp1-null mutants have a premature reduction in the number of self-renewing NPCs in the hindbrain, and that this reduction in proliferative capacity manifested itself in reduced hindbrain growth.

Fig. 2. Neurogenesis is perturbed in embryonic brains with abnormal blood vessels. Tata et al. compared Nrp1-/- hindbrains, which lack blood vessels in the neurogenic zone, to wildtype hindbrains after staining with a marker for mitotic NPCs (A) or sectioning and staining for DNA-containing nuclei to visualise hindbrain dimensions (B). The graph in (A) illustrates how the number of NPCs in mitosis peaks and declines earlier in Nrp1-/- than wildtype hindbrains The images in (B) and quantitations in (C) show that hindbrains are thinner (highlighted by green arrows) and have a smaller cross-sectional area (orange dotted outlines).

Finally, they determined that that vasculature regulates hindbrain NPCs independently of its role in tissue oxygenation, because restoring tissue oxygenation did not rescue the NPC defects of hindbrains lacking neurogenic zone blood vessels. Vascular signals are therefore vital to maintain the proliferative capacity of hindbrain NPCs, independently of the archetypical role of blood vessels in supplying oxygen for metabolic processes.

The knowledge that blood vessels are an important part of the hindbrain’s neurogenic niche raises the possibility that manipulating their growth might be a useful strategy to expand progenitor niches for brain repair, either by supporting endogenous niches or by combining pro-vascular therapies with the transplantation of neural stem cells.