BMI is enough to define overweight a young athlete?

The Body Mass Index (BMI; in kg/m2) is simple to measure and has been a valuable tool in monitoring trends in obesity and it is also strongly correlated with adiposity in children, but it has also numerous disadvantages. Mainly, it does not distinguish between increased mass in the form of fat, lean tissue or bone, and hence this can lead to significant misclassification. Since the pathology associated with obesity is driven by the excess fat mass (FM), the ideal monitoring tool should directly assess adiposity. To date, many studies have assessed the magnitude of health risk associated with excess FM in children.

Many tools are available to evaluate FM, and free-fat mass (FFM), in this contest. Dual energy Xray absorptiometry (DEXA) is a gold standard, but it’s a complex and expensive method. Other approaches may provide integrated use of methods with easier implementation. Skinfold thickness, to estimate fat mass, is a technique widely used in this population and bio-impedance monitors that can distinguish between lean and fat tissue on the basis of their different conductance and impedance characteristics. 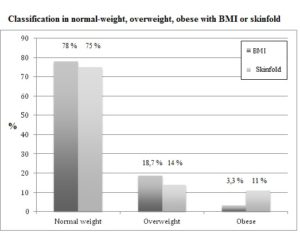 Our study aims have been to link skinfolds analysis, bio electrical impedance and anthropometric evaluations through a deep examination of anthropometric parameters, classically used to distinguish the cut-off of overweight, and of in-depth analysis of body composition.

The data obtained in our group through the evaluations with BMI and with skinfold analysis showed that the latter was much more accurate for assessment of body fat, especially for those belonging to the group of obese (Fig. 1).

In fact, if as far as the group of normal-weight is concerned the difference is low, in groups of overweight and obese showed substantial differences: the first was, especially in males but also in females, more consistent when analyzed with the only index BMI , unlikely what was observed with the skinfold analysis has led to include in the group of obese people a greater number of obese. It has been showed that the BMI increases in adolescents from both sexes, is primarily determined by the increases in FFM rather than FM. Therefore, we may erroneously classify some adolescents without overweight as subjects with adiposity excess.

During human growth, during puberty, sex hormones induce a pronounced sexual dimorphism males gain proportionately more muscle and lean tissue compared to fat, and females lay down fat as a natural part of the ontogeny of their sexual and reproductive physiology.

The fact that BMI represents only a simple classification for body fat and may produce a significant level of misclassification is universally accepted but widely ignored. This is because, in the absence of alternative measures, the advantages of BMI have outweighed its disadvantages.

We propose therefore the evaluation of body composition with anthropometric parameters, skinfold analysis and BIA as an alternative or addition to BMI curves. The chief merits of this evaluations are that they assess FFM, TBW, its distribution, and FM so if there is excess weight, you can identify if it is given by an excess of fat mass or lean tissue. Accordingly, we can reduce misclassification in muscular children who are rated as overweight or obese by BMI.

However, this simple evaluation offers the opportunity to move beyond BMI . Its advantage is that they are relatively cheap, portable, simple and rapid to use. Its disadvantage is that it is less accurate than more sophisticated methods.

The results show that the analysis of BMI is not enough in a population of young athletes. It would therefore be appropriate to complete a full assessment of body composition. Such a study should include anthropometric parameters, FM, FFM and hydration status in order to diversify the excess weight from the muscle mass in excess, considering it an additional tool in the BMI accordingly those errors of classification that can create problems in the approach to the young athletes would be reduced.

We noticed how the error is more frequent in those categories where overweight and obese are analysed. Such a consideration should warn all the sanitary measures for the prevention of those who have caused the damage of juvenile obesity. The assessment of nutritional status in children and adolescents, especially young athletes, should be provided in order to monitor their proper growth and physical activity.